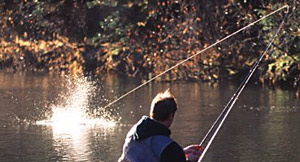 Forest Highway 10 stretches from Yakutat, to the Dangerous River (29 miles), crossing the famous Situk River (pronounced see-tuk) at the Nine Mile Bridge. Most effort at this access point targets the spring steelhead and Dolly Varden fisheries. This is also the drop-off point for anglers floating the Situk River, a popular 13.5 mile trip. Many anglers fish seasonally for steelhead, and coho and king salmon near the mouth of the Situk River.

There are a number of remote fishing sites accessible by airplane. Situk Lake and Mountain Lake are accessible by trail or float plane when available. There are several very remote but very productive systems at the extremes of the area. To the east, the Italio, Akwe, and East Alsek Rivers, and to the west, the Tsiu River (pronounced sigh-you), which are known mainly for their coho runs. Check with local air taxi's for charter service to these outlying systems.

Freshwater Fishing Along The Yakutat Roadside

The 13.5 mile section of Situk River from the Nine Mile Bridge to the Lower Landing can be floated in approximately 6 to 8 hours, but so many holes beg to be fished that it is not uncommon to be on the river from dawn until dusk. This can be a lengthy period during the extended daylight hours that occur in the spring and summer. Approximately half of the anglers boating the river take a small outboard motor along to provide for a faster trip through "dead" water or to make up for time spent fishing when darkness begins to fall. Those who prefer a quiet day of drifting usually head out earlier in the morning and paddle with more determination. Others anglers stay at one of the Forest Service cabins or camp along the river. Be advised; warm spring mornings can turn into snowstorms by afternoon on the Yakutat Foreland, so pack some extra gear "just in case."

Situk River averages about 90 feet wide and 3 feet deep. There are holes 10 feet deep, but most of the river can be waded with chest-high waders. There are good fishing areas both above and below the Middle Situk Cabins, but there is no developed trail system. Most people wade along the shoreline, especially during mid-summer when the water is generally too shallow for motor powered boats.

A U.S. Forest Service trail begins near the Nine Mile Bridge that leads 4.5 miles upstream to Situk Lake, where there is a Forest Service cabin. Sport fishing in Situk Lake is not usually very productive, but excellent angling can be had for sockeye salmon and Dolly Varden during the late summer off the inlet from Mountain Lake. The trail to the Situk cabin continues another 2 miles to Mountain Lake which can provide excellent angling for rainbow trout and Dolly Varden in the spring (after the ice goes out) and during the summer. The shoreline of Mountain Lake is very steep, and access to the head of the lake is virtually impossible on foot.

Another trail leads 3.5 miles downstream from the Nine Mile Bridge to the Middle Situk Cabin. It is necessary to cross the Old Situk Creek several miles down the trail so hip boots are recommended. The lower sections of the Old Situk can provide some fast action for Dolly Varden in the fall, which has saved more than one trip when heavy rains have flooded other systems.

The other major road leads 4.5 miles west from town providing access to the Ankau Lagoon system, a maze-like lagoon that features reversing tidal rapids and is best known to anglers for coho fishing in the fall.

PLEASE NOTE: The land beyond the Ankau Bridge is privately owned. The road to the right at the end of the bridge leads to the community cemetery. Grave sites are located throughout the area and deserve respect. This area should be considered "off limits" to vehicle traffic.