Compared to lush tropical and temperate forests, Alaska's boreal forest is an austere place: it supports a relatively low diversity of species, and a relatively low abundance of individual organisms. But the plants and animals that do live here are well-prepared for the bitter cold, short summers, and frequent fires of Earth's largest ecosystem.Those that remain have unique adaptations to help them thrive year-round.

Many species of birds avoid winter's challenges by migrating: they arrive in spring to nest and feed during the brief boreal summer, then depart in fall for milder climes.

Some boreal forest animals avoid the stresses of winter by spending the cold season in hibernation. Brown bears and black bears, marmots, and jumping mice hibernate. Wood frogs and many species of insects hibernate so deeply that their bodies actually freeze.

Whether it's fur or feathers, an insulating layer keeps an animal's body warm in winter, and cool in summer. Caribou have dense coats of hollow hairs that not only provide superb protection from the cold, but also help them stay afloat as they cross lakes and rivers. Wolves have excellent fur insulation, enabling them to hunt on all but the coldest days. Ptarmigan and grouse grow thick layers of down.

For some boreal forest animals, winter may actually be the season of relative plenty. Predators such as lynx and wolf, whose large bodies and excellent fur insulation protect them well from the cold, may find their prey easier to locate and capture in winter.

Some animals use their environment for insulation. Small mammals such as voles and ermine spend much of their winter lives under the snow, sheltered from the cold world above. Flying squirrels burrow into snow-covered branch tangles. Ptarmigan and grouse dive from trees into the soft snowpack, where they wait through the cold nights.

In winter, the boreal forest's colors shift from greens, browns, yellows, and reds to whites and greys. Some animals, such as ermine, snowshoe hare, and ptarmigan, change their colors accordingly-making them harder to see as they forage or hunt.

Plowing through thick snow is a huge energy expense for animals that often have precious little energy to spare-so many boreal animals, including lynx, snowshoe hare, and ptarmigan, have developed "snowshoes." Caribou have hooves that splay out to help buoy them in snow, and moose have very long legs that allow their bodies to remain above the snow level.

Moose are so large that even the coldest days of the boreal forest winter do not substantially affect them. Rather, they may have their greatest temperature-related problems in summer, when they take to lakes and marshes to feed and to avoid heat and mosquitoes.

As an adaptation to long nights with little chance to forage, some small birds, such as grosbeaks, crossbills and redpolls have special throat pouches that they fill with seeds before roosting for the night. As the birds wait out the long night, they digest the seeds.

For some boreal forest animals, fire makes the forest more livable. Bark beetles home in on recent burns and settle onto the trees to lay eggs on the cooling bark. Soon afterward, three-toed and black-backed woodpeckers, move in to feast on the insect invasion. 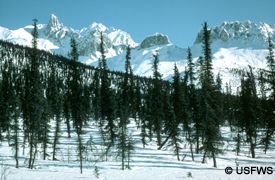 Like animals, boreal forest plants must deal with long, frigid winters, short dry summers, and frequent fires. Few plants are able to withstand this climate-so overall species diversity is low-but those that do, thrive with the help of some remarkable adaptations.

The slender, conical shapes of many boreal forest trees help them to shed snow.

The growing season in interior Alaska is only about 130 days long-compared with 140-200 days for temperate forests, and 300-365 days for tropical forests-so most plants must pack all of their growth into this small window of time. Black spruce and white spruce extend their own growing seasons by retaining their waxy, drought- and frost-resistant needles year-round; thus they can photosynthesize later in autumn and earlier in spring than deciduous species.

Few boreal forest plants have adaptations to help them directly withstand fire. Most survive fires through resilience or persistence: some, such as willow and wild rose, can resprout from unburned rhizomes; others, such as geranium, have seeds that are able to lie dormant in the soil for many years until post-fire conditions become favorable for germination. Aspen and birch seeds are winged, so wind carries them into recently-burned areas where they sprout and grow quickly. Fireweed and balsam poplar seeds are carried on "parachutes" of fine fluff.

Some boreal forest plants benefit from fire: black spruce has "semi-serotinous" cones that are sealed with pitch. When a fire moves through a stand of black spruce, the heat of the flames causes the cones to open. Those cones that are not burned are now ready to spread their winged seeds abroad.