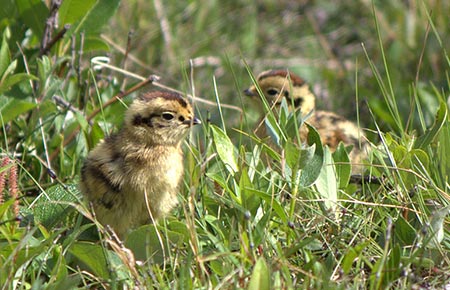 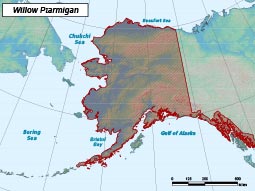 A distinctive feature of the willow ptarmigan is its feathered feet, which help this sedentary bird negotiate the frozen ground.

The thick, wide bill is a trademark of all willow ptarmigan, the largest of Alaska’s three ptarmigan species. Another distinction is the white patch behind the male’s bill, lasting only two or three weeks in spring, before the chestnut plumage of early summer comes in. Only another ptarmigan can distinguish cocks from hens when willow ptarmigan are in winter plumage. Then, both sexes are white with black tail feathers. Beginning early in May the cocks develop a beautiful cape of chestnut-red feathers. They court the hens in this plumage, not completing the change to the brown summer plumage until the hens are nearly finished incubating the clutch of eggs.

No sooner does the male get this first set of dark chestnut feathers, however, than a new generation of lighter brown feathers grows on its neck and breast. This new set is never completed, because by early August the cock is beginning to grow white feathers for the coming winter plumage. In mid-August, male ptarmigan are a patchwork of four sets of feathers: a few old winter feathers on the wings, new white feathers on toes and belly, and parts of the light spring and darker summer feathers.

The willow ptarmigan is the largest of three “Arctic grouse” found in Alaska, which also include the rock and the white-tailed ptarmigan.

Driven by their reproductive urge, cocks become less and less tolerant of each other throughout March and April. In early spring, males stake claims to parcels of ground that they defend in good weather, but spring snowstorms will send these males back into flocks. By late April or early May, males establish permanent territories that they defend in fair weather or foul. Hens arrive on the breeding grounds a bit later than males and then select their mates and nesting areas (often the same ones used the previous year). Males usually remain monogamous within a breeding season. By late May the first eggs are laid under a shrub at the edge of an opening. The cocks stay on their territories throughout June, although the intense strutting, tailfanning and aerial chasing typical of the courtship period wanes after the hens begin to incubate their clutch for about three weeks, which averages between six to ten eggs. Most Alaskan ptarmigan chicks hatch in late June and early July.

Unlike other North American grouse or ptarmigan, male willow ptarmigan usually help to care for their chicks. Sometimes, in fact, cocks will take over all family responsibilities if the hen is killed. Both adult willow ptarmigan are vigorous in their defense of the brood. One of the thrills in store for the Alaskan traveler is the chance to watch the excited actions of a female ptarmigan as she tries to distract attention from her chicks by simulating injury or to duck the flailing wings of the cock as he dives at the two-legged intruder, cackling gutturally as he flies.

Despite all of this care, young ptarmigan encounter many things that can kill them unless they are vigorous and lucky. Poor weather too soon after hatching, the quick pounce of the fox or the swift swoop of the hawk, chance separation from the family, and diseases like coccidiosis, all can be fatal. In most years, 65 to 80 percent of all chicks die before they are 11 months old. A ptarmigan’s life expectancy brightens a little once it reaches maturity since adults die at the rate of about 50 to 60 percent per year. At that rate, a 4-year-old ptarmigan is a fortunate bird. The abundance of ptarmigan at any time is the result of the reproductive success minus the deaths during the previous two years. Ptarmigan numbers can build up with astonishing speed given favorable conditions, but often decline just as rapidly.

Ptarmigan season across most of Alaska begins in early August and runs through the spring, (March through June), depending on the area. Bag limits are generous — check the regulations for specifics.