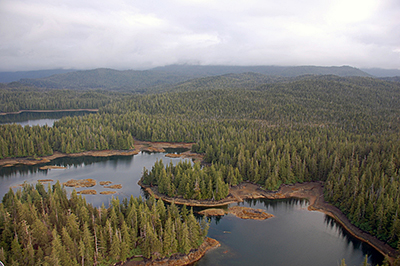 Spring evenings in Southeast Alaska bring welcome warmer temperatures, later sunsets, and the return of bird song. But in the early spring of 2018, residents near Juneau were treated to an unusual sight, small groups of citizen scientists driving slowly down various side roads, with microphones strapped to their car roofs.

No, they were not checking for late-night birds or dinner conversations. Those microphones are specialized, designed to pick up the high-pitched chirps and clicks, indiscernible to human ears, of one of the little-known nocturnal mammals of the state, bats.

It turns out the best way to see where bats spend their time during different seasons is to record their calls, which are distinctive for each of the seven bat species found in Alaska. The Alaska Department of Fish and Game has recruited interested citizens in Juneau and several other communities to help record bat calls and expand the research effort on the local species. Once analyzed, the recordings collected by citizen scientists can be used to gain rough estimates of where Southeast Alaska’s bats may be hibernating. But how do research biologists then find the exact crevice occupied by the bats among the labyrinth of rocky outcrops and ledges? One method involves trapping bats in fine mist nets, attaching a tiny radio tracker, and then following them back to their roosts, a labor-intensive endeavor. But Tory Rhoads and Karen Blejwas, local ADF&G Threatened, Endangered, and Diversity Program (TED) biologists, are testing out a new method that just might be the future of conservation biology, scent-detection dogs, like Jack. 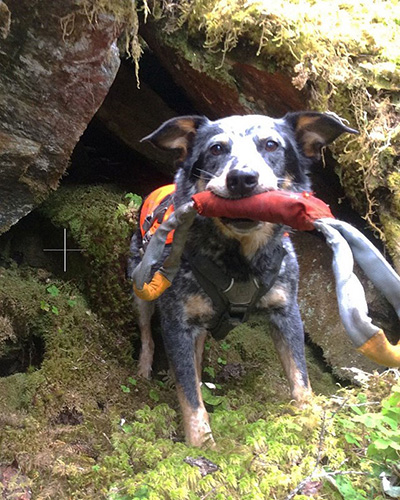 Jack is an Australian cattle dog, a rescue from Washington state who has been training for years for this moment. To test this training, Rhoads plants samples of bat fur and guano (feces) in the woods for Jack to find. Then the whole team follows closely as Jack makes his way through the woods. Scent detection dogs are usually trained to pinpoint the source of an odor, such as scat or a carcass. This study presents a unique challenge because Jack had to learn to search not just for the source of the odor, the bat itself, but also for surfaces where the bat had briefly landed and then left.

After weeks of practice and training, the big test has come. Jack had successfully pinpointed known hibernacula, or bat hibernation sites, many times. Now the team was testing whether Jack can find a new site. The team follows Jack through steep rainforest stands as he searches for areas with recent bat activity. After a time, Jack stops at a certain rock and investigates it according to his training. Satisfied with what he has found, Jack turns his attention toward his handler, Colette, and sits down squarely. This is Jack’s signal that he has found what he was looking for. “Are you sure?” Colette asks Jack to confirm his finding. Impatiently, Jack stands up then sits right back down again as if to say yes, I’m sure. Jack is immediately rewarded with his favorite toy.

To check that Jack has indeed found a hibernation site, the team sets up game cameras at the spot he had shown them. Sure enough, dusk reveals a bat touching down on the exact rock that Jack had indicated. He had successfully found a previously unknown hibernaculum, saving researchers a great deal of time. 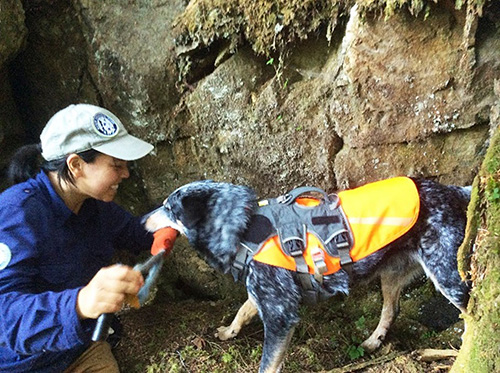 Blejwas and Rhoads are stationed in Juneau and have been working on finding hibernacula of Alaska’s bat species for the last several years. Seven species of bats are present in the state, but six of those are limited to Southeast Alaska; only the little brown bat is known in Interior and Southcentral Alaska. The little brown bat is the most widespread bat in the U.S. (and in Alaska), with its continental range extending coast to coast and all the way up to Kotzebue, Alaska. In the last several decades though, little brown bat populations in the eastern part of their range have been severely impacted by white-nose syndrome, a deadly fungal disease that attacks hibernating bats. First detected in New York State in 2006, the disease spread through the Northeast and into the Midwest. In recent years, the disease appears to have hop-scotched across the continent, showing up in Washington State in 2016. This raises concern about whether it could spread to Alaska and the possible extent of that spread.

The first step in understanding how the disease could spread in Alaska bat populations is to find out where the bats hibernate. Identifying these hibernacula is crucial to long-term monitoring of the bats, which will improve management, increase the probability of early detection of white-nose syndrome, and better allow biologists to monitor the spread of the disease should it reach Alaska. Blejwas has already taken major steps in this regard, using radio tagging to track bats to hibernation sites on forested scree slopes, one of the first studies to find bats hibernating in this habitat. In fact, Blejwas’s research in Alaska has confirmed the findings of other researchers in the western US, who have concluded that western populations of the little brown bat behave very differently from the eastern populations in that they rarely congregate in large numbers in caverns or other large hibernacula. Alaska’s little brown bats may fare even better due to colder temperatures and dispersed hibernacula in close proximity to summering areas, potentially making them less vulnerable to the spread of white-nose syndrome than their eastern counterparts have been. 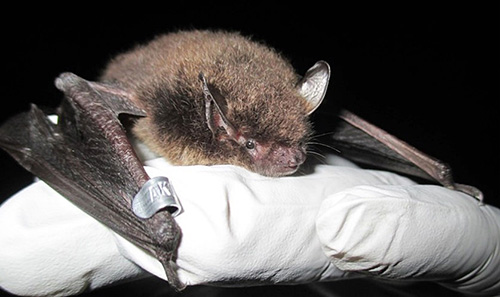 A captured little brown bat with a tag, before release.

To further expand this bat research work, Rhoads is pursuing a MSc at the University of Northern British Columbia. Her thesis will focus on developing potential new methods for locating winter bat roosts, specifically investigating the feasibility of more wide-scale use of trained scent detection dogs like Jack to help find these sites.

Scent Dogs on the Job

Scent detection dogs in conservation is not a new idea. Dogs have been employed as such for over a century, trained to locate invasive species, nesting birds, elusive study species, scat, pathogens, and even to detect pollutants in water sources. With advances in DNA technology, scat can be an incredibly informative and valuable resource in conservation, and dogs are one of the best ways to find it. In large areas with cryptic and dispersed megafauna, where game cameras will not work, detection dogs are on the job. One example is the use of scent dogs to find scat of the endangered Southern Resident killer whale population in Puget Sound, to assess the whale’s feeding habits. What makes Jack a successful scent detection dog is his motivation and strong play/fetch drive. Dogs like Jack are so energetic and play-obsessed that they oftentimes are not well suited to being house dogs or pets. Instead, working in wildlife conservation gives their playful motivation a practical direction, and they are able to form bonds with their handler and lead fulfilling and purposeful lives. A little brown bat crawls across a lawn during a summer evening. It later flew off. The taxonomic name for the bat family translates as "hand-wing."

Going forward, Rhoads hopes to demonstrate that the method is reproducible with other dogs and to further develop it so it can be used in areas where bat overwintering sites are unknown. First, acoustic driving surveys can narrow down areas with high probability of hibernacula, and then conservation dogs can be sent in to specify the exact location. By having citizen scientists conduct driving transects and detect where bats first appear in April, large regions can be narrowed down to smaller, specific areas for the dogs to search. Potential overwintering areas in Petersburg and Haines, which are being surveyed this summer, were all found by citizen scientists in this manner.

Narrowing down sites like this is crucial as the dogs cannot be expected to survey huge areas without clues. For example, prior research around Juneau indicated that bats were selecting one of two ridges for overwintering. Both ridges included steeply forested rocky hillsides, a description that matches the entire Tongass Forest. If the dogs search for too long without any clues or rewards, they become bored and frustrated, and if you don’t know where to start, then you’re asking the dogs to find a “handful of needles…in a field of haystacks” says Rhoads. 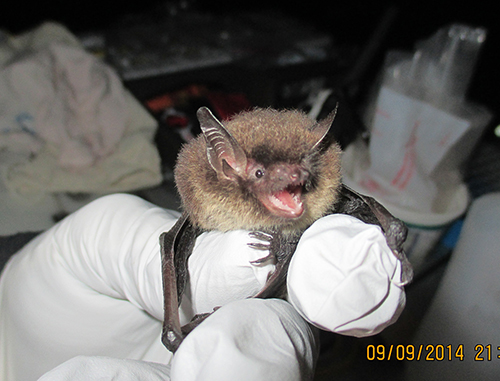 A researcher holds a little brown bat before release.

Jack is one of several conservation dogs in Alaska, and the future of the job is promising. Scent detection is a non-invasive method that can be used to compliment established technology and produce more efficient outcomes. With the valuable new data on bat hibernacula that Jack finds, Alaska’s bats can be more thoroughly monitored for population status and the potential presence of white-nose syndrome. The decimation of bat populations by the fungus in the eastern part of the country, along with its sudden appearance in Washington in 2016, has highlighted the lack of information on overwintering bats in Alaska. Determining these population base lines is vital to the conservation of one of Alaska’s most important insectivorous (bug eating) species. Additionally, developing successful methods of locating bat hibernacula could be broadly applicable to not only Southeast Alaska, but across the western U.S. and wherever bats hibernate in non-cavernous structures. As the work to study and locate Alaska’s bats continues, conservation dogs may just be an important player on the field in the years to come.

Living With Bats, Alaska Department of Fish and Game