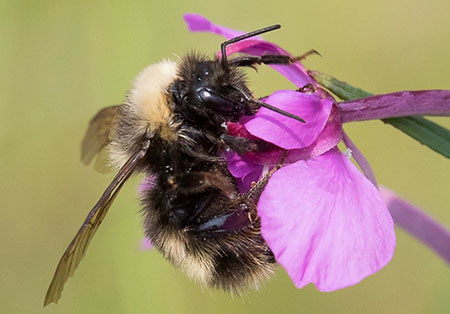 It was last summer that it first occurred to me that I don’t know anything about bumblebees.

I wasn’t terribly interested in them as a child. I spent most encounters shying away from them, tucking my head into my shoulders like a pigeon and trying to make myself as small as possible when they buzzed close. I did the same for any striped, buzzing insect that ventured too close. In fact, I didn’t like them very much at all. This was cemented by an incident in Malaysia, where my family was visiting some friends who lived within a vast durian orchard, and I stepped on an Asian hornet. Needless to say, it was an unpleasant incident. I was lucky enough that a doctor happened to be a guest at the gathering and was able to treat the sting.

It wasn’t until later when I was introduced to a friend’s beehives that I gave bees, as a general species, renewed consideration. Renewed consideration turned into interest, and interest turned into fascination and admiration. Bees are remarkable and essential to the vitality of the world around us. In recent summers I’ve stopped in my tracks to examine bumblebees in particular. I’ve found delight in just pausing to study a fuzzy specimen gathering pollen, even taking to picking up the odd docile bumblebee to take a closer look.

I realized that as much as I enjoy observing these amazing creatures, I didn’t know very much about them. I thought I would share a bit of what I’ve learned.

Of the 250 global species of bumblebees, 46 species exist in North America with 23 species found in Alaska. Bumblebees are a familiar sight as weather warms. Rotund and fuzzy, they are a happy hallmark of spring’s arrival, when queens emerge from torpor to seek out suitable nesting locations and gather nectar for their forthcoming brood. Although many of these furry pollinators appear similar at first glance, we are rather fortunate that we are surrounded by quite a variety of them. 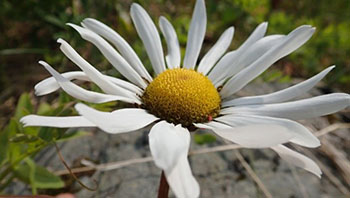 Arctic daisy. Knowing what plants to look for is a good way to find bumblebees going about their business. Photo by Torre Jorgenson, iNaturalist.

Bumblebees can be tricky to identify. Stripe coloration can vary quite broadly within a species and appear similar between different species. Programs such as iNaturalist or field guides such as Bumble Bees of North America are certainly useful in narrowing down what you might have observed. Taking photos of a docile bee from the back (dorsal) and the side (lateral) can go a long way toward identification. I am currently working on honing my own bumblebee-identification skills.

While it would be delightful to explore all of Alaska’s bumblebee species, we’re going to take a look at one of the most frequently seen.

The Western Bumblebee is our most common bumblebee here in Alaska. Our variety is unique to northern climes, subspecies mckayi, sporting longer hair than their more southern cousins. You may espy their queens buzzing around in the springtime; she’s much longer than the workers, a little less than an inch (20-21 mm or 0.77-0.84 inches in length), with the workers being maybe half as long. They can be identified by the large, black spot between the wings and often a black band, and often some white or grey coloration around the tail. The rest of familiar yellow-and-black patterning can vary. 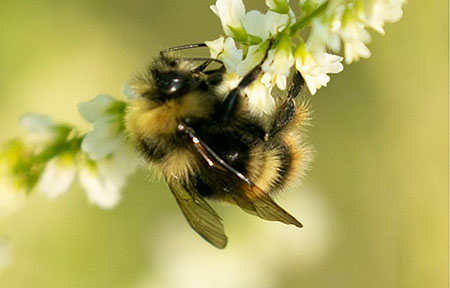 Western Bumblebees possess a similar colony life and life cycle to other species of Bombus. It starts, as always, with the queen emerging in the springtime, typically early to mid-May here in Alaska. The queen overwinters in a state of torpor. Having mated in the fall, she immediately looks to establish a new colony. She’ll be seeking out suitable nest sites, buzzing close to the ground level, usually seeking holes in the ground, or hollow logs, grass tussocks, and convenient manmade structures.

Then, she builds a wax pot for nectar storage. The wax is secreted by glands in the abdomen and the queen uses her legs to scrape off flakes and mold them into shapes. Then comes her first clutch of eggs, laid on a bed of pollen moistened with nectar, and known as a brood clump. The newly-hatched larvae are tended by the very busy queen, who alternates between foraging for nectar and caring for her new brood. The young colony is greatly at-risk in this period, whether from weather, or other queens seeking to establish themselves. Four weeks later, the young brood spin cocoons and pupate for two weeks, then hatching as adult females. At this stage, the queen turns her focus to fully developing the colony, continuing to lay eggs, retain colony temperature, and defend the nest from intruders. Bumblebees can sting repeatedly, but generally ignore people and animals. 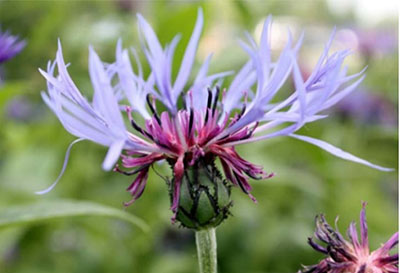 And so, the colony continues thus, with new generations of workers born and raised, and in turn foraging for nectar throughout the summer months. As soon as the colony reaches its full capacity of workers, the queen lays unfertilized eggs to produce males and new queens. The new queens leave to mate, and eventually to enter a state of torpor in the fall in anticipation of the coming winter. The original queen and the males will age and die in the fall. The cycle begins anew in the springtime.

An environment rich in plant diversity is vital for bumblebee survival. Considerable amounts of pollen and nectar resources are needed to tend the colony. Being excellent pollinators and foragers, they’re able to gather nectar from a variety of flowers, sometimes participating in nectar-robbing, where they bite into the base of a flower to draw nectar without pollinating the flower. They pollinate through “buzzing” flowers by vibrating their wing muscles, which causes pollen to loosen and latch on to their hair. This ability is also useful for survival during drops in temperature; they can elevate their internal temperature to cope with colder climes. This is vital to their emergence in the early springtime in Alaska, when there may still be the occasional cold snap from a clingy winter.

We Briefly Interrupt This Article to Talk About Parasites and Threats

Seeing any and all bumblebees is a pleasure; that being said, bumblebees are facing an overall decline in North America. Threats faced include fungal pathogens such as Nosema bombi. Other threats include habitat loss, use of insecticides, climate change disruption, invasive species, and intentional or accidental deaths. 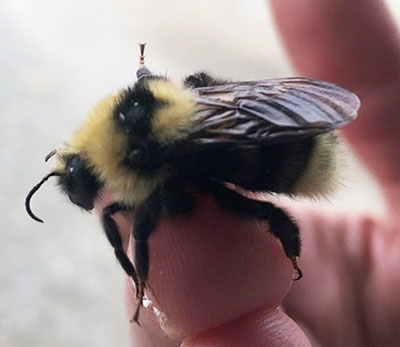 Likely a Bombus insularis, which has markings that may be mistaken for other species. Credit: Sanaa Siddiqi

It may be easy to mistake the real thing for one of their colony parasites, Bombus insularis, the Indiscriminate Cuckoo Bumblebee. This invader, like its avian namesake, will intrude upon a nest and overwhelm the workers through aggression and pheromones. It sometimes may even kill the queen. They plant their own eggs in place of the host’s, which the workers then care for. As the Indiscriminate Cuckoo Bumblebee does not gather pollen or create workers of its own, these tactics are vital to its survival; unfortunately, by that token, this species and other parasites are also contributing toward the decline of the Western Bumblebee.

While they seem to prefer whatever flowers are in abundance, they particularly favor members of the Ceanothus, Centaurea, Chrysthamnus, Cirsium, Geranium, Grindelia, Lupinus, Melilotus, Monardella, Rubus, Solidago, and Trifolium families. Plant diversity is imperative for the genetic health of bumblebees, which makes their favored plants especially important. Knowing what plants to look for is a way to find bumblebees going about their business. Here are some of the related wildflowers that you may find while out on a walk or a hike. 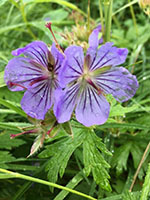 Wild Geranium may be known by other names, such as Woolly Cranesbill. They’re largely abundant in woodlands and meadows, alpine areas, and are visible throughout Southcentral, and Southwestern Alaska. Their lilac-colored blooms show themselves in late June to August, and rather easily; they stand at a tidy 18 to 30 inches tall. They have minute disks and five large petals marked by dark stripes. Their leaves are hairy and deeply toothed, with a wide spread.

As their name suggests, these cornflowers are perennial. Also known as mountain knapweed and mountain bluet, they stand between 9 to 31 inches tall, and might be mistaken for some sort of thistle. Its flowers could be described as pale blue with tufted petals, sparsely spread. It possesses tiered sets of long, tapered leaves. It was brought to North America as an ornamental plant. They grow often along roadsides, disturbed areas, woodlands, and sagebrush scrub.

The arctic daisy is a common sight mid-summer, with their golden yellow disk and white, narrow, and broad white petals. They can be anywhere between 8 inches to 18 inches tall at the stem, with dark green, notched green leaves at the base. Other subspecies of this plant, C. integrifolium, might be white, pink, or lavender. They can be found widely across Alaska, especially in rocky coastal areas and marshes (Pratt 1989). 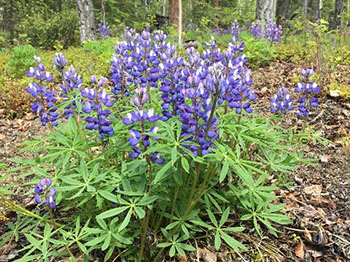 Found throughout most of Alaska with the exception of southern coastal areas, Arctic Lupine are a distinctive sight alongside roadsides, fields, and dry slopes. The flowers are a striking indigo with full, clustered stalks at vertical intervals along the stalk. They may be reminiscent of the pea plant, and little wonder, as they are a part of the pea/fabacae family. To the touch, the flowers are wooly, particularly the buds. The leaves are narrow and fan out. They stand at about 10 to 16 inches tall. Beware, though; while this gorgeous plant is a welcome sight, it is also incredibly poisonous, especially the seeds (Pratt 1989).

A type of daisy, the Elegant Goldenrod can be found throughout Southeastern and coastal Southcentral Alaska, as well as the Aleutian chain. It’s such a distinctive plant; it’s between 12 inches to 24 inches tall, and is crowned by clustered, stacked yellow blooms. (The proper word for this is inflorescence.) The leaves are sharp and toothy and long, climbing up the stem. While the blooms have the appearance of being a singular flower, they in fact are comprised of tiny florets within a ray.

So when you’re out and about in the springtime, and you see your first bumblebee queens of the season, be sure to take a moment and take them in; they are the heralds of the spring and the summer. 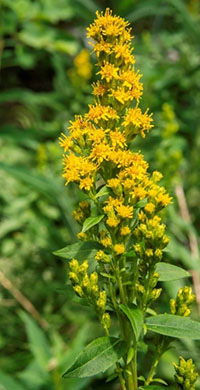 Sanaa is an amateur naturalist with a fondness for bumblebees. Summer or winter (as we do more or less have two seasons up here), she enjoys the myriad outdoor activities Alaska has to offer. She lives near Hatcher Pass, as close to nature as possible.

More on bees and other pollinators in Alaska, and the University of Alaska’s Alaska Center for Conservation Science, and the bee atlas and monitoring program

Koch, J.B., and J.P. Strange. 2012. The status of Bombus occidentalis and B. moderatus in Alaska with special focus on Nosema bombi incidence. Northwest Science 86: 212-220. doi: