European Green Crab: Will they
be the next aquatic invasive species in Alaska? 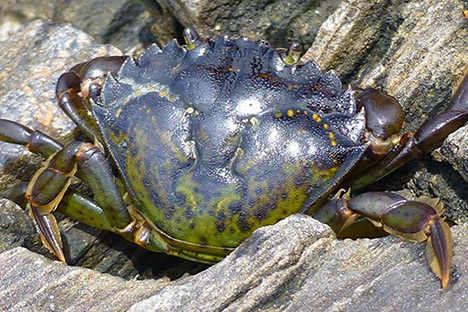 With the recent celebration of the 51st Earth Day, April 22, 2021, and Alaska Invasive Species Awareness Week on the horizon, June 13 – 19, May is an opportune time to think about non-native organisms that can have negative impacts on Alaska ecosystems, economies and human health.

Natural resource managers strive to raise awareness about these invasive species by describing the threats they pose to native species and by sharing information about how to identify them and where they can be found. Nevertheless, detecting recently introduced invaders to aquatic ecosystems can be a difficult task when their populations are in low abundance or when they establish in remote locations. The mission is significantly more challenging in Alaska in part due to the enormity of the sparsely populated state, with more than 12,000 rivers and three million lakes (and uncounted ponds and creeks), and a coastline that surpasses that of all other U.S. states combined. Community-based early detection monitoring and citizen science are ways to overcome these challenges of scale.

Several factors contribute to the premise that European green crab (Carcinus meanas) could be the next aquatic species to invade Alaska, if they haven’t already. Temperate marine habitats around the world now have established populations of the invasive invertebrate native to the northeast Atlantic. Green crabs can be dispersed by natural and human-mediated pathways and they tolerate a wide range of environmental conditions. As ocean temperatures trend warmer than average, green crab larvae dispersed in ocean currents from more southern latitudes will find more suitable habitat along the Alaska coast. By far the most formidable influence is recent detection of adult invasive green crabs in Skidegate Inlet on Haida Gwaii, British Columbia, and larval crabs found in Prince Rupert, both located less than 100 miles south of Ketchikan (figure 2). Southeast Alaska has abundant estuarine and tidal salt marsh habitats ideal for green crabs to become established.

Humans are the significant common thread in the movement of harmful non-native species. Early translocation of European green crabs to the U.S. is thought to have occurred in the 1800’s when they were introduced to the Atlantic coast. Vessels headed to North America filled their hulls with beach rocks or water from European shores for ballast (to stabilize), unintentionally bringing along hitchhiking green crabs and no doubt other species; the ballast and stowaways were discharged upon arrival at the next port. Ships continue to be notorious for inadvertently transporting non-native species on their hulls or within ballast tanks. By the 1980’s, green crabs had arrived in San Francisco Bay- again as a hitchhiker- this time in the movement of live seafood such as oysters and lobster. To prevent invasive species introductions, the seafood industry has improved management practices to reduce the chance of unwanted species distribution. However, aquaculture continues to be a means for invasive crabs and other invasive species to be moved locally from one site to another when organisms, gear and infrastructure are relocated. 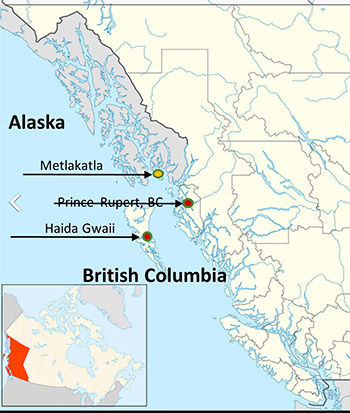 Perhaps most pressing to Alaska is the natural transport of European green crab larvae in ocean currents from populations in British Columbia. After green crabs were introduced to San Francisco Bay, they quickly spread south to the central coast of California and north to the outer coasts of Oregon, Washington, and British Columbia in the following decade. In the years since, green crabs were accidently transported to Sooke Basin, located at the south end of Vancouver Island, BC, and became established when mussels were transplanted from coastal embayments for biotoxin monitoring. Once established in inland waters of the Salish Sea, they further spread to locations in both British Columbia and Washington. Although human-mediated pathways can be mitigated by implementing best management practices and adopting and then enforcing stringent laws, the only way to improve on the management of natural dispersal is eradication of source populations. Barring elimination of larval supply, early detection and control must be planned for in susceptible locations.

European green crab are able colonizers, efficient predators, and ecosystem engineers. Invasive green crabs damage eelgrass and reduce eelgrass habitat, which can cause a cascade of negative impacts to a diverse community of species. Eelgrass (Zostera marina) is a highly productive keystone component of healthy shallow subtidal and intertidal ecosystems and provides living substrate and cover for myriad native invertebrates and fish. Eelgrass beds supply nursery habitat for juvenile salmonids, other fish, and juvenile Dungeness crab (Metacarcinus magister); provide key habitat for spawning herring; and many species forage within the protection of the beds. Bivalves, small gastropods, crustaceans and polychaete worms live just below the soft sediment. Stressors such as invasive species, water quality degradation and development threaten these ecosystems. While hunting for prey in the benthos, European green crabs rip and shred blades of seagrass and dig up and eat plants. A National Park in Nova Scotia, Canada, initiated intensive management of green crabs after discovering that eelgrass beds had been reduced by 98%. Migratory and resident shorebirds, native crabs, flatfish, and sea otters rely on the diversity of species that occupy eelgrass habitats. Declines in biomass and distribution of this important habitat has proven to have dramatic impacts throughout the entire ecosystem.

Seagrass and salt marsh habitat destruction is a main concern when European green crab become established, as is predation upon native nearshore fauna. In fact, invasive green crabs have been blamed for the collapse of the soft-shell clam industry in Maine. They feed on mussels, marine (polychaete) worms, and small oysters, clams and crustaceans like juvenile Dungeness crabs, thereby posing a risk to Alaska commercial, subsistence and personal use fisheries. 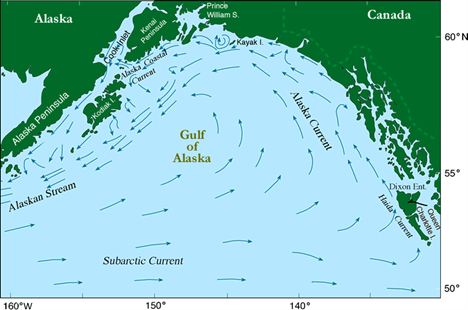 These extensive threats to coastal ecosystems come in the form of what could be mistaken as a harmless shore crab. Having a shell that averages three inches across at its widest point, the carapace or shell of adult European green crabs are considerably smaller than commercially important adult Dungeness, Tanner and King crabs. They are about the size of a typical Post-It note. Contrary to their common name, “green” crab coloration can vary widely from green to brown to yellow, orange, or red. Since the color has such variability, and other native shore crabs are also green, this is not a useful characteristic for identification. A better distinguishing feature are the five spines on each side of the shell to the outside of the eye (Fig. 4). Native crabs have either fewer or more than five spines on the carapace behind the eye. Although juvenile Dungeness crabs resemble adult green crabs, Dungeness crabs have ten small spines on either side of the carapace. Green crabs also have pronounced swimming legs in the back of the body and each of their two claws are differently sized, one is the cutter and the larger is a crusher. The Department of Fish and Game can help with identifying species should you think you have found a green crab (see below).

The common name, European green crab, is misleading because it is known that these crabs are not always green. Further, they are indigenous to areas beyond Europe. The native range of green crabs extends from the northeast Atlantic Ocean to the Baltic Sea, along coasts from southern Greenland, Iceland, and Norway to northern Africa. In Europe, they are commonly called “shore crab” because they are the dominant species there. With a few “shore crabs” native to Alaska, namely purple shore crabs (Hemigrapsus nudus) and green shore crabs (Hemigrapsus oregonensis), it would be confusing to add an invasive shore crab to the list. When specificity is required, the scientific name is helpful. The Latin name Carcinus maenas purportedly translates to “raving mad crab”, which may be a more fitting moniker.

Pocket estuaries, salt marshes and mudflats are preferred habitat by European green crabs, and in Washington they are found to be most abundant at the mouths of estuaries. They are generalist predators that feed on a diversity of bivalves and crustaceans of the same size or smaller. They can dig down in sediment six inches to find food, attacking dozens of clams per day. Female green crabs can release up to 185,000 eggs once or twice a year. The eggs can survive approximately 60 days in water 54°Fahrenheit (12° Celsius) and larval development can be completed in 45 days. 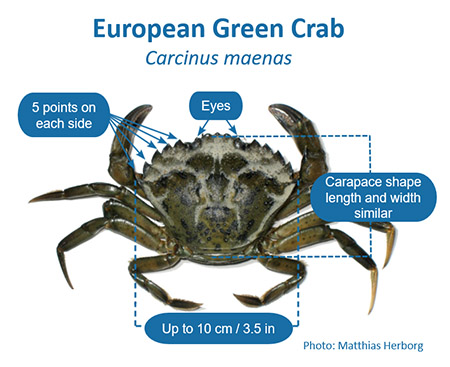 In sum, European green crab have been introduced globally where they have negatively impacted nearshore ecosystems. Human-mediated and subsequent natural spread of invasive crabs could result in new introductions to Alaska (Fig. 3). Source populations of green crabs have been found less than 100 miles away. Water temperatures and habitats in Alaska are suitable to establishment of green crabs, if they are introduced. Once established, one can expect strong effects on seagrass habitat and species that Alaskans rely on for food. Early detection monitoring is a means to find green crab before populations expand.

Since the early 200’s, Alaskans in coastal communities have engaged in marine invasive species monitoring. From Southeast, to Prince William Sound and Kachemak Bay, community-based monitors set traps monthly during high tides following a standard protocol. The traps are left soaking for 24-hrs after which the monitors return to catalog the type and size of organisms in their traps. To date, no green crabs have been detected. In the future, new technologies, such as environmental DNA and metagenetics, may allow a more nuanced method of detecting invasive species in aquatic ecosystems. Water samples, collected by monitors when they set their traps, will be analyzed for presences of European green crab DNA. This technology will be tested by Metlakatla Indian Community this summer as the community nearest to the known populations of green crabs in British Columbia. These hard-working volunteers are on the frontline of protecting coastal ecosystems.

Tammy Davis is the Invasive Species Program Coordinator for the Department of Fish and Game. If you are interested in joining the corps of frontline early detection monitors in your community, would like more information about aquatic invasive species or want to report what you think is an invasive species, please contact her directly by email: tammy.davis@alaska.gov or phone: (907) 465-6183.