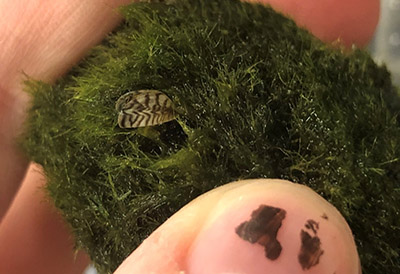 In early March this year, I received the type of alert I have been dreading since I started working as the invasive species program coordinator for the Department of Fish and Game 15 years ago. The US Geological Survey sent an automated report to me and others across the nation, that invasive zebra mussels had been found attached to aquarium moss balls by a keen-eyed employee of Petco in Seattle, Washington.

Within a few hours, my inbox was on fire with messages from invasive species coordinators in western states, stating that zebra mussel infested moss balls had been found in pet stores in their state too. Quickly, it was clear that invasive mussels had hitchhiked on aquarium products to many states in the U.S., and most importantly to me, to Alaska! Currently, 27 states and 2 Canadian provinces have evidence of zebra mussels packaged along with marimo moss ball products sold at pet stores. The implications of this news to the wild and rich waters of Alaska cannot be overstated. If you have purchased marimo moss balls from a pet store or an online source, we need to talk. Please call me.

Velvety in appearance, marimo moss balls are not actually moss, but a rare growth form of live filamentous algae of the species Cladophora aegagrophila or Aegagropila linneaei. These algae are indigenous to lakes and rivers in Iceland, Japan, and eastern Europe. Most moss balls imported into the U.S. in the aquarium trade are from Ukraine. Notoriously invasive mussels are also native to freshwater systems in Ukraine, both zebra mussel (Dreissena polymorpha) and quagga mussel (Dreissena bugensis) are naturally found in its Dnieper River drainage.

Zebra mussels are thumbnail-sized invasive freshwater shellfish named for the striped pattern of their shell. They look like tiny D-shaped clams. Though they don’t look like much, it’s hard to overstate the threat they pose to Alaska public waterways. The Great Lakes region was invaded by zebra mussels in the 1980s and they quickly spread. Over thirty years later, they have infested nearly all watersheds in the Lower 48, the Columbia River Basin in the Pacific Northwest is one exception. In the Great Lakes, the invasive mussels have dramatically reduced primary production and have contributed to basin-wide population crashes of species fundamental to food webs and fisheries. Some studies indicate invasive mussels may facilitate the establishment of other harmful invasive species.

Even where they are native, these mussels outcompete other species, but where they are invasive, the destruction and financial burden are staggering. Although the environmental and economic costs that zebra mussels could impose on Alaska have not been evaluated, the State of Washington estimates impacts to dams, agriculture, salmon, and other resources would exceed $100 million, and we know the Great Lakes region experiences $500 million annually in damages1. With that level of economic hardship, you can understand the alarm that rang across the west when zebra mussels were found in pet stores. 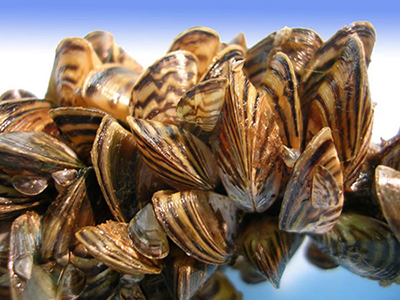 A close look at a cluster of zebra mussels. US Fish and Wildlife Service photo.

If you have towed a boat through the west in the past ten years, you’ve probably been through a watercraft inspection and decontamination station. State, federal and local entities have increasingly set up stations at boat launches and along highways to inspect for aquatic invasive species that attach to hulls and propellers or are concealed in live wells, bilge tanks or other compartments. Boats arriving at these stations after having visited infested lakes and rivers, or displaying obvious clinging mussel shells, dangling aquatic plants or other signs of invasive species, are pressure washed with 104°F water to kill invasive organisms. Trailered watercraft are a well-known pathway for invasive mussel introductions. When zebra mussels were found hitchhiking on aquarium moss balls, it required an immediate shift in thinking by aquatic invasive species managers.

That afternoon, I was on the phone with Dan Coleman, Alaska Department of Natural Resources (ADNR) Invasive Species and Agricultural Pest Coordinator, discussing signs to be posted at Elodea infested lakes. I told him about the zebra mussel observations in various states and that I had been calling pet stores to ascertain if these products were for sale in Alaska. Upon my news, Dan said, “I’m heading out the door, I’ll stop at the Wasilla Petco, and get back to you.” Shortly after I hung up, Dan notified me he had found what appeared to be zebra mussels in a container with a Betta Buddy marimo ball. He also sent a close-up photo. Even though they were quite small, slightly larger than a grain of rice, they looked very much like zebra mussels.

As Dan was visiting his local outlet, I continued calling other stores in the state. Any pet store with marimo balls for sale were asked to voluntarily pull their stock until we had more information. In most cases, store managers were happy to avert an invasive species threat by holding back their stock. By mid-day, Petco had informed their stores nationwide to pull all products suspected to harbor zebra mussels.

Pet stores and aquarium hobbyists will pay the price if zebra mussels take over their aquarium systems. However, Alaska has a lot more to lose if someone illegally dumps their aquarium into a lake or storm drain. The fact that ADF&G receives reports of non-native ornamental fish in state waters demonstrates this behavior occurs. You might remember that ADF&G eradicated goldfish from Anchorage’s Cuddy Pond in 2019. If zebra mussels have been introduced into an aquarium from a marimo moss ball, they will take over the system, and it will be challenging to eliminate them. If aquarium water from an infested tank is dumped down the drain or toilet, zebra mussels could clog your home plumbing or cause more severe and costly consequences for municipal water infrastructure. Clogging pipelines by forming dense colonies is among the many negative consequences zebra mussels cause. 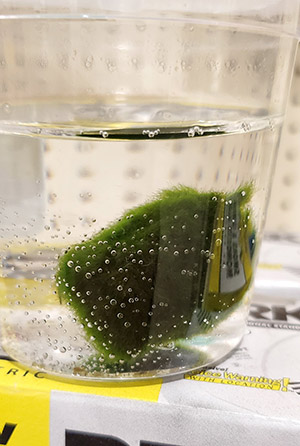 A Marimo moss ball in a cup of water. This is the Betta Buddy brand and has a zebra mussel that's not visible in this picture. Courtesy ODFW

In addition, when introduced to lakes and rivers, invasive mussels cause widespread, long-term, damage by altering food webs, changing water chemistry, and harming native fish, plants and other aquatic life. They foul shorelines making them unusable, encrust fish passage facilities and aquaculture operations, and damage boats and marinas. They are highly efficient filter feeders which means when large populations take over a lake, they can deplete plankton, starving native species. The waste they produce accumulates and degrades the aquatic environment, depleting oxygen and making water acidic. Any way you look at it, preventing zebra mussel infestations is the best choice we have.

Once these little bivalves become established, eradication is nearly impossible. Some consider zebra mussels to be the number one invasive species threat to freshwater environments because of the destruction to fish habitat, loss of recreational opportunities, and the economic impacts to fisheries, hydropower, and municipal drinking and wastewater infrastructure, as well as to lakeshore property owners.

Preventing zebra mussels from destroying our lakes, fisheries, and favorite ways of spending time on the water is up to all of us. The water chemistry, temperature gradients and other habitat parameters of Alaska waterways are suitable for zebra mussel to become established, which is why preventing an introduction is paramount. The first thing you can do is to handle your aquarium contents legally and safely, which means never dumping its contents into water bodies. If you are a boat owner, also remember to “Clean, Drain, and Dry, Every Time”. By always cleaning plant material, critters and sediment from your propeller, hull and trailer; draining water by pulling the plug before you leave the launch and drying any water from your boat before you launch again, you can help stop the spread of aquatic invasive species.

If you are an aquarium hobbyist and have purchased marimo moss balls, zebra mussels could have been introduced to your tank. Again, first and foremost, never dump aquarium contents, including fish, plants, and water, into a nearby lake or river or down a storm drain. It is illegal and harmful to the environment. There are stiff fines for violations. Next, dumping the contents of your aquarium down the drain in your home should only occur only after the water has been sanitized and any unwanted living organisms have been dispatched. If you have a marimo moss ball in your aquarium tank, fish bowl or even a decorative jar, please call the Invasive Species Hotline at 1-877-INVASIV (1-877-468-2748) for guidelines on how to safely dispose of them, sanitize your system and protect your aquarium Your actions make a difference. 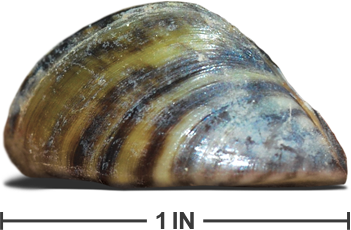 It can be difficult to euthanize a pet you’ve grown attached to yet can no longer care for. It may seem harmless to give it a chance at life in the wild. But none of the likely scenarios are good. Your pet will either become lunch or die from the drastic change in environment. If it lives, the worst-case situation is that not long after you release it into a nearby lake, natural resource agencies and local non-profits that are invested in healthy ecosystems and clean water will be called in to clean up an expensive environmental problem. A real-life example in Alaska is Elodea. It is a hardy, invasive, aquatic plant that was sold in the aquarium trade and used in science classes in the state before 2014. When numerous water bodies had become infested, ADNR quarantined five aquarium plants, including two species of Elodea. Today, 24 water bodies in Alaska are invaded, including waters from Cordova to Southcentral and into the Interior. Evidence indicates infestations in Cordova, Fairbanks and Anchorage originated when someone dumped their aquarium. In the past ten years, state, federal, and tribal agencies and local organizations have eradicated Elodea from 11 water bodies.

Projects to eradicate invasive species infestations that originated from illegal release of non-native organisms require expertise, collaboration with other agencies and landowners, reallocation of staff time, and financial resources over years. Though costly, these projects are necessary to reduce the chance of further spread, to restore valuable habitat, and reestablish or improve fishing opportunities. To efficiently use funds and avoid environmental and economic harm, preventing the introduction of zebra mussels to Alaska waters is crucial.

Thank you for doing your part to help: