By Riley Woodford and Arin Underwood 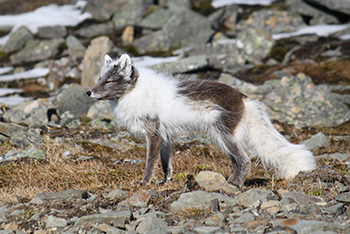 A shedding arctic fox photographed mid-molt by Arin Underwood in Svalbard, Norway on June 9, 2018. By July this fox will have the summer coat.

Spring brings changes to Alaska’s wildlife. One of the most pronounced is the new fur coat sported by the arctic fox, which transforms from fluffy white to sleek brown-and-grey, better suited to warmer days and the relatively snow-free landscape of the Arctic summer.

The arctic fox’s close cousin, the red fox, is also found in the Arctic and is abundant in the north. While there are many color variations in red fox, they do not turn white. The coat of both foxes is a combination of dense warm fur worn under longer guard hairs, which help shed moisture, and may be a different color than the fur beneath.

Arctic foxes begin shedding in early April and by late June wear their summer fur. The change to winter pelage begins in September and by November the luxurious white winter coat is complete. Twice as thick and dense as their summer fur, this seasonal coat provides outstanding insulation.

The arctic fox is well adapted to the cold. With a compact and round body, short, rounded ears and muzzle, the arctic fox can survive temperatures below -50°F. Furry footpads protect the bottom of their paws. This is referenced in their scientific name, Vulpes lagopus, (vulpes is Latin for fox) lago-pus is Greek for hare-foot, a nod to the similarity to the snowshoe hare’s furry feet. The arctic fox also makes good use of its incredibly fluffy tail, which it wraps around its body and face when sleeping in the cold.

Many animals shed winter coats for lighter summer fur, but few make such a dramatic transformation in appearance. Snowshoe hares are perhaps the best known, and ptarmigan are the most familiar bird to make the change to camouflage white. Collared lemmings are the only rodents in North America that turn white in winter. Ermine wears a white winter coat and turn brown in summer, and like the arctic fox, ermine are also both a predator and a prey animal. The white coat helps them hunt and hide in the snowy landscape. 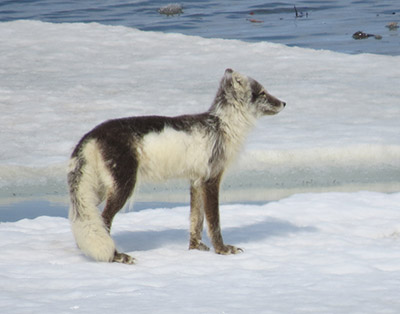 In all cases it’s daylight, not cold or warm weather, that triggers this seasonal shedding and hair growth. Animals register changes in the photoperiod - the hours of daylight - which spurs the secretion of hormones such as prolactin and melatonin. This has been duplicated indoors in experiments - shortening the photoperiod induces hormone production and the growth of the winter coat, and lengthening it artificially simulates the springtime phase of the cycle.

In Alaska, the blue phase more common on the Aleutian and (especially) on the Pribilof Islands, and is rare in the north. This is due to blue foxes, or coastal ecotypes, relying more on marine food sources and less on rodents. Along the islands, their darker fur provides better camouflage against ice-free coastlines in winter. 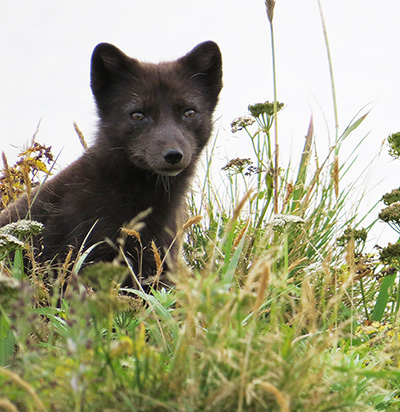 A blue fox in the Pribiloff Islands. This is a dark color morph of the arctic fox, and although rare overall, it is common on the Pribiloffs. Photo by Kelly Nesvacil.

State wildlife biologist Nate Pamperin caught arctic foxes for his master’s degree research project. Between 2004 and 2007 he collared 37 foxes in Prudhoe Bay and around Teshekpuk Lake to see if their movements differed with the influence of human-provided (anthropogenic) food sources around the Prudhoe/Kuparuk oilfields. He said he only ever caught white phase arctic foxes and never saw a blue phase on the North Slope. Across the snow-covered tundra, white is a more useful color while hunting rodents than foraging on the rocky coasts.

The arctic fox has a circumpolar distribution and is found in Eurasia and North America, Greenland, Iceland, Norway, and barren arctic islands off the coast of Siberia, Canada and the Bering Strait. It is the only land mammal native to Iceland. In Norway, the blue phase is more common in the Svalbard region (from three to 16 percent), compared to just one to three percent of the population in general.

Despite inhabiting northern islands, most arctic fox populations can travel seasonally via sea ice, also called pack ice. Motivated by local competition, foxes sometimes disperse out across their range. Some foxes move over vast distances, using sea ice to move between arctic continents and islands. In fact, this travel across sea ice is an important component of arctic fox genetic dispersal. As sea ice temporarily connects continents in the Arctic Ocean, arctic foxes can easily travel between islands and land masses. In 2019 a tagged juvenile female blue phase from Svalbard, Norway traveled to Ellesmere Island, Canada over four months, covering 2,700 miles. She averaged about 30 miles a day, and her GPS tracking collar logged one remarkable day when she moved 96 miles. 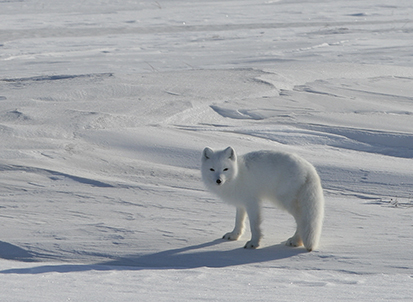 On islands where pack ice is uncommon, though, foxes can remain genetically isolated and thus distinct. This occurs on the Pribilof and Commander Islands off the coast of Alaska and Russia where populations remain isolated for generations.

Red foxes also occur in different color morphs. Red is most common in general, but color can range from light yellowish to deep auburn. Different color phases can occur in the same litter. Red foxes displaying color morphs are referred by the name of that phase, such as cross, silver, and black. The cross fox, for example, has a black/brown cross on the back and shoulders that contrasts with the fur on the flanks. The silver and black phases are similar, but the black does not have the silver-tipped guard hairs characteristic of the silver fox. The black-silver morph appears to increase toward the north and the northwest of Alaska. However, even where most abundant, it comprises less than two percent of the population. 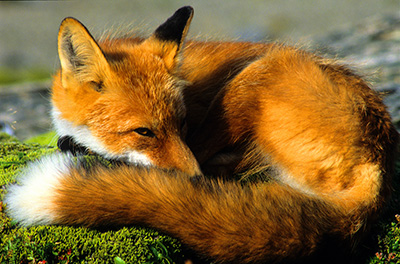 A red fox naps on the tundra in Becharof National Wildlife Refuge, May 9, 2006. This is the classic red fox coat, with dark ears (on the outside) and a white-tipped tail. Photo by Mark Emery.

Pete Beattie of Whitehorse began trapping in the Yukon in 1971. In almost five decades of trapping and living in the woods, he saw a lot of foxes. The difference between the summer and winter coats is striking.

“They are way furrier in winter,” he said. “They look pitiful sometimes in the summer, but by the end of November they look all round and beautiful, they’re all filled out.”

He said about three-quarters of the foxes he trapped in the central Yukon were the classic red fox color.

“I saw quite a few cross foxes,” he said. “The cross foxes come in all different patterns, and they’re really beautiful sometimes. Different areas are darker, sometimes it’s like big spots or areas of their flanks that are darker.”

“The silver foxes, they’re super rare. I saw maybe five or six in 50 years in the Yukon. When you see them from a distance they look black, but when you get closer you can see the longer white guard hairs, and they look silvery.”

He said fox populations seemed to follow the snowshoe hare cycles, as lynx do.

In other areas, the classic red fox is less common than other color morphs. Nate Svoboda, the Fish and Game area wildlife biologist on Kodiak Island, said they don’t see a lot of the traditional red fox coloration there. 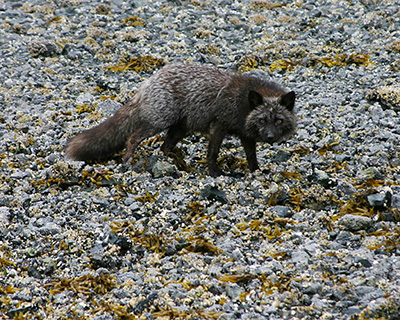 A wary “black” or “silver” red fox on Kodiak Island, photographed in June. The longer silver guard hairs stand out against the black fur. Note the lighter fur at the tip of the tail, characteristic of most red fox morphs. Photo by Aaron Christ

“We really have a mixed bag on Kodiak,” he said. “From tannish off-color all the way to black, and silver foxes. We also have arctic foxes, which were introduced, and they hybridize.”

Red foxes are native to Kodiak, but the island is well-known for the many introductions of a variety of animals, beginning with the Russian introduction of foxes in the 1700s. Because of their greater commercial value, “blue foxes” were most introduced, but the sliver and cross color morphs of the red fox were also introduced in fur farming ventures early in the 20th century. Over time, introduced foxes escaped or were released, providing the island with a mish-mash of fox genetics.

Foxes on the North Slope

Biologist Nate Pamperin said he saw red foxes quite often on the North Slope. And they appear to be increasing.

“From observations by oilfield workers as well as some other work done by researchers, the presence of red foxes has increased from what it may have been historically,” he said. “There are documented instances of red foxes taking over den sites that used to be occupied by Arctic foxes.”

It has been suggested that the southern range of arctic foxes is determined (by competition) by the northern range of red fox. It is believed that red foxes expanded their range northward over the 20th century. While a number of biologists have seen this trend on the North Slope, it’s not necessarily occurring everywhere. Biologists would like to learn more about this range expansion and the dynamics between the fox species. A brown-tan colored red fox, with a darker back, and the white-tipped tail, on Kodiak Island in summer. Kodiak Island foxes show a range of colors. Photo by Arin Underwood.

This can prove to be a problem for the smaller arctic fox, whose competitive advantage over the red fox is its extreme cold tolerance. As the range of the red fox creeps northward with warming Arctic temperatures though, this advantage begins to lose its edge.

That was Pete Beattie’s experience in the Northwest Territory as well. Between 2008 and 2014, he and his wife Mary traveled to the arctic six times, for several weeks in late March and early April, to help a friend with his reindeer herd on the Mackenzie River Delta. Foxes were all over the place.

Video: Red fox on Round Island, Alaska, by Maria Gladziszewski 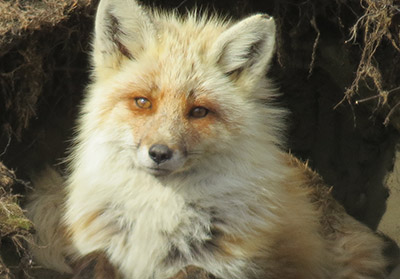 Arctic fox on North Slope rolls on a snow patch

The annual Alaska Trapper Report offers insights into foxes in Alaska. For example, in the 2019 season 78 arctic foxes and 577 red foxes were trapped in Alaska – and more than half (273) of those red foxes came from Northwest Alaska (Region 5).

Thousands of arctic foxes (the blue fox morph) and red foxes (generally cross and silver morphs) were introduced to at least 455 islands in Alaska between 1750 and the 1930s. Fox farming was big business in Alaska in the early 20th century. The introductions were sometimes disastrous, sometimes short-lived, and in some cases, reversed. Learn more in Game Transplants in Alaska.