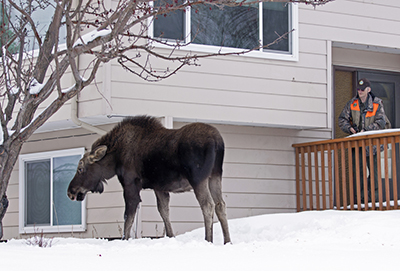 An Anchorage urban moose. A wildlife biologist is watching from the house next door. ADF&G photo.

It feels good to connect with a wild animal. My Octopus Teacher documents that fascination, as does that movie about Timothy Treadwell. My daughter feeds birds in the winter and she feels like they’re friends. But those birds aren’t going to tear the siding off the house when the feeder is empty, or attack the neighbor. But bears and moose will, and that’s why feeding them is illegal. It gets out of hand.

Carl Koch, a state wildlife biologist, cringed at a similar Facebook video posted a few months earlier from Haines – this time a woman hand-feeding a cow moose with a calf. “People don’t understand that this huge animal may defend her calf if she feels threatened, or can be cranky because it’s winter,” he said. “One time they’ll approach the calf and if the cow doesn’t like it she’ll stomp them.” 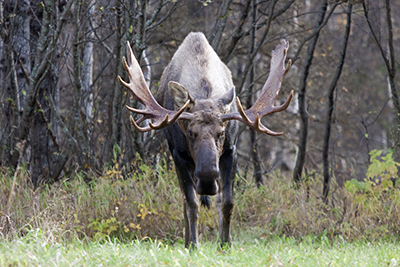 A bull moose in stares down a photographer in Anchorage. ADF&G photo.

On March 1, 2021, Fish and Game was alerted to another emoji-rich post and photo of a South Anchorage homeowner excited about feeding a moose. The text accompanying the picture read, “I am so loving Alaska! My new home!” She was likely less excited when an Alaska Wildlife Trooper cited her.

Koch said while some people are really naïve, many admit they know it’s illegal but don’t care.

“They think it’s cute and harmless, and we’re bureaucrats overreacting,” he said.

In other cases, people call for help when things get out of hand. In 2016 Koch and his colleagues dealt with a bear-feeding operation in Juneau that had gone seriously awry. “This guy called because he was having problems with bears,” he said. “This was out the road, and there were close to a dozen bears involved.”

Both the state troopers and Fish and Game responded. When the troopers first arrived there were two bears sitting in the yard, and a walk around the property revealed six more bears. The area was trampled and bear scat was everywhere. The story unfolded: The man had been feeding bears dog food for years. He liked having them around, he said, at least he used to. He’d been feeding one particular sow for six years – and this summer she brought her three cubs. But now there were more and more bears and they were coming day and night. They were chewing on his deck and damaging the siding on the house. 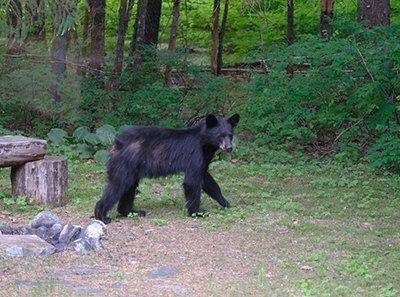 A yearling black bear in Juneau. Photo by Jennell Jeniges

He was feeding the bears a 50-pound bag of dogfood every day just to keep them at bay, said Chad Rice, a wildlife technician who helped live-trap bears. “He was feeding them that amount of dog food because he’d fed them for so long it was a problem. He was scared and he needed help. They were literally chewing up his house at night trying to get in. There were claw marks on the siding.”

Wildlife biologist Ryan Scott said there were hundreds of empty dog food bags on the property. “What did that cost?” He wondered, recalling the scene. “I don’t think a single bear we handled from that is alive today,” he added. 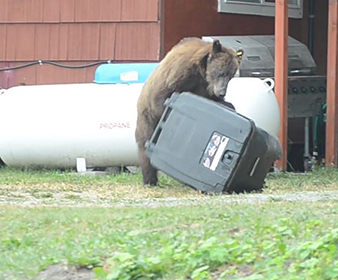 A young female brown bear in Haines, which was collared as part of a bear population study in that community, attempts to gain access to a bear resistant trash container in summer of 2019. She was ultimately unsuccessful and eventually went elsewhere in search of a meal. ADF&G photo.

Koch said some of the bears were live-trapped and relocated, but others had to be euthanized because they would not stay away.

“We collared some of the bears, and some got hit by cars,” Rice said. “These kind of things never work out for bears in the end.”

Bears rarely just start breaking into houses, they work up to it. Birdfeeders are often the beginning of trouble.

Bird seed is extremely attractive to bears, and Fish and Game has long advised bird-lovers to stop feeding birds in spring and summer. As an attractant, it’s right up there with garbage, barbecue grills, chicken feed and fish smokers. Small rewards register big with bears, and in a summer when the berry crop or fish runs are poor, bears that might have stayed away from homes and neighborhoods are more likely to turn to human sources for food.

“Bears are good problem solvers, and we had a lot of problem-solving bears this past summer,” Rice said. “They were getting into vehicles, and structures like garages and dwellings.” 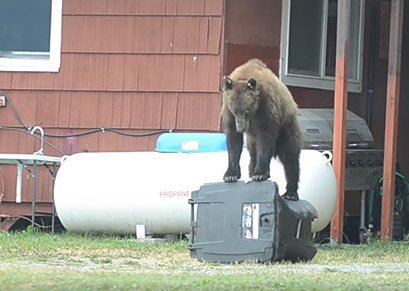 Bears are persistent when they've been rewarded. They will move on when they are not.

Rice said he receives calls about bird feeders attracting bears several times a month in summer - usually from concerned neighbors. “We try the education approach and generally we get pretty good compliance,” he said. “Some people push back. Until they see property damage, they don’t make a connection.”

“The common thing you hear all the time is, ‘I’ve been doing this for years and never had a problem,’” Koch said. “And they blame the bear and say it’s an unusual bear.”

Koch said people get away with small things like a feeder, leaving an empty trash can out or leaving a bag of dog food in the back seat of the car, but when a hungry bear starts coming around those attractants get noticed. That happened this past summer in Juneau, and it started with a bird feeder on a second story deck.

The homeowner “pushed back” when contacted, and was unwilling to put the feeder away, even though the spilled bird seed scattered beneath the deck was attracting a bear. The bear worked the neighborhood, finding unsecured coolers – empty but smelly – and outdoor refrigerators and freezers that were not empty. Before long, the bear climbed up a fence onto that second story deck. 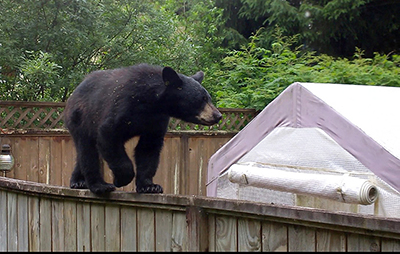 A young black bear in the Mendenhall Valley in Juneau. Bears may pass through Alaska neighborhoods and investigate food opportunities, but will move on if unrewarded. Photo by Lynda Jones.

“The neighbors realized it was a problem,” Rice said, “but by now the bear is hooked, and he’s coming around to see if there’s anything new in the freezer. And the whole neighborhood is involved. That bear actually went into an apartment. At that point the bear is past the hazing point, it’s game over and the bear is euthanized.”

The best thing people can do for wildlife, Scott said, is to keep these bad things from happening in the first place. He fully appreciates the desire to connect with wildlife and lives in a neighborhood where people co-exist with their wild neighbors.

“I have bears around where I live and I enjoy seeing them,” he said. “And I know if these issues start, I won’t be able to enjoy having them around.”

For more about bears, birds and moose, see the Living with Wildlife pages on the Fish and Game website.