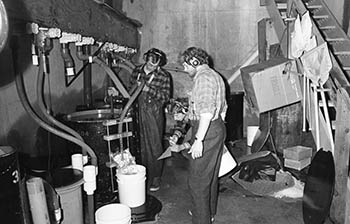 In November of 2015, while working in my cubicle at the Alaska Department of Fish and Game headquarters in Juneau, Alaska, I got a call from Sam Bertoni, a retired fishery biologist. He had three large boxes of hatchery slides, prints, and negatives from the 1970s and 1980s he fished out of the garbage and took with him when he retired. They had been in his garage for decades and he heard from someone who knows someone that I was scanning old Fish and Game slides for the ADF&G Image Library. Yes, I tell him, I am, and yes, I am interested in his haul. We made a plan to meet, and he arrived at my cubicle the next day with a small stack of three ring binders filled with prints of the Snettisham Hatchery construction, meticulously documented. We agree I’ll scan the best images. 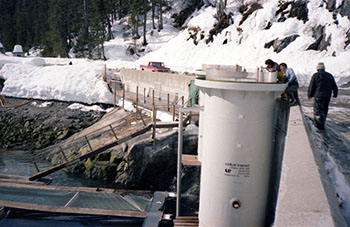 Snettisham Hatchery fish silos, 1982. Both the silos and the incubators are Chem-Proof brand. Below is a raceway divided into sections for rearing fish. Sam Bertoni, far right.

Sam and I met a few days later and I explained why I selected and scanned the images I did, how I stored the metadata in the electronic file, and that I’d need to keep the prints I’d scanned to hand over to the State Archives along with copies of the electronic images. We then sat down and went through the scanned images one by one and he filled in the information gaps: names, dates, and locations. 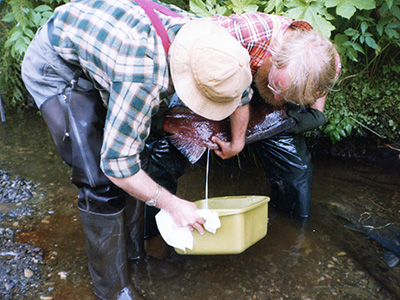 When we finished, he paused and studied me. He said he had more slides… and was I interested. Yes, of course, I said; stop by any time to drop them off. He leaned in close and said these three binders of slides were a test, and that he felt comfortable bringing in the rest of them.

Later that week he brought in his three boxes of slides, prints, and negatives. We agreed I’d scan them in batches and he’d stop by and give me additional information about the images. When he left, I lifted the lid from the first box and written in ball point pen on the inside of the lid was a last will and testament for the slides: if the boxes were found in his garage after he died, they were to be delivered to the Alaska State Archives. 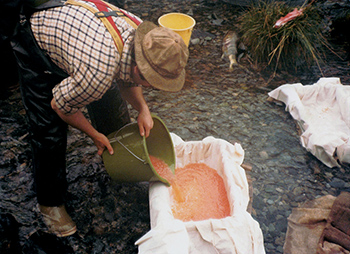 Sam Bertoni pouring newly taken eggs into a basket for the trip back to Juneau. October 1975.

Altogether, I scanned 800 images from Sam’s collection. We met several times as I worked my way through the boxes. He often had a story for the images, and I’d type as he spoke. Often my typing couldn’t keep up with his narrative. Once, while identifying a group of men in a stream, including himself, he paused, peered at my monitor, and said “I still have that shirt.” From Sam I learned about broodstock collection, egg transport, smolt transport, tagging, weir construction, egg shocking, Norwegian net pens, and hatchery construction. 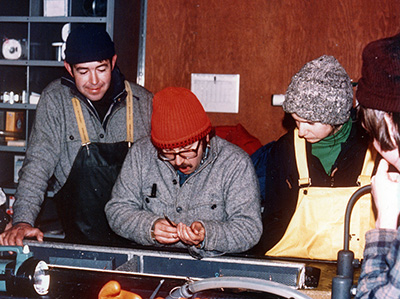 Sam’s years as a fishery biologist coincided with Alaska Fish and Game’s development of hatcheries and fishery enhancement in Southeast Alaska, but his expertise was sought outside the state too. In 1990, Bruce Bachen with Northern Southeast Regional Aquaculture Association was at an American Fisheries Society meeting. He met someone from the Izaak Walton League who was looking for someone with weir building experience. They wanted to build a weir on the Owens River in California to trap migrating adult trout in an effort to improve Crowley Lake fishery resources. Bruce put them in touch with Sam, who then traveled to California to oversee construction and installation of this weir. 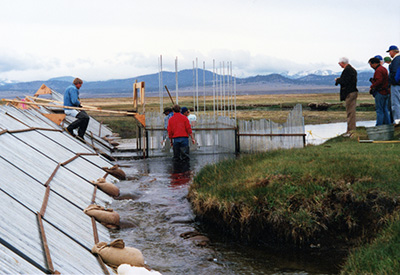 Owens River weir construction, 1990. This fish weir was constructed by the Izaak Walton League, under the direction of Sam Bertoni. 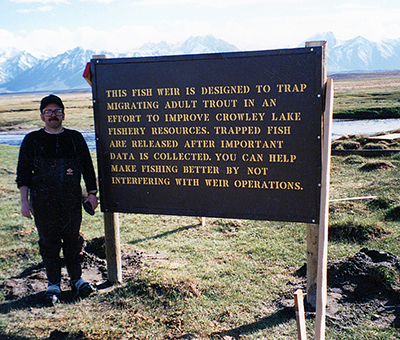 Sam Bertoni standing next to the Owens River weir construction informational signage, 1990. This fish weir was constructed by the Izaak Walton League, under the direction of Sam Bertoni.

Because my cubicle is located at the intersection of Sport Fish staff and hatchery staff, his animated explanations and stories often attracted nearby coworkers to my cube, and a group would gather to discuss streams, smolt transport, egg counters, the birth of the Southeast Alaska hatchery program, and what was going on with it today.

On our last day together, Sam presented me with a copy of Patricia Roppel’s 1982 book Alaska's salmon hatcheries, 1891–1959. He apparently had a bunch of those in his garage too! It was an enjoyable read. It reminds me of Sam, his generosity of spirit, and his invaluable contribution to the visual and narrative history of hatchery development and fishery enhancement in Southeast Alaska. Many of Sam’s contributed images are available to the public via the Alaska State Archives: https://vilda.alaska.edu 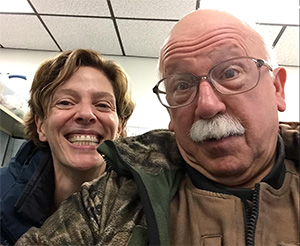