Dave Klein
A Lifetime in Wildlife Biology and Ecology 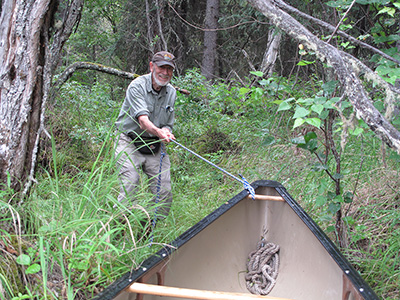 Dave Klein, one of Alaska’s most influential wildlife biologists, died Nov. 21, 2020 at the age of 93. An internationally recognized expert of northern ecosystems and wildlife, most notably arctic ungulates, he is remembered as a much-appreciated mentor to scores of biologists working in Alaska today.

Science writer Ned Rozell knew Klein as a friend and neighbor in Fairbanks for most of the past 20 years. He wrote: Before I met him, Dave had retired as a biologist and ecologist at the University of Alaska Fairbanks. He never really seemed retired to me.

Over the years, he helped so many graduate students earn their degrees they could fill an auditorium. Those men and women spent hours watching caribou and musk oxen and bison and other wild animals roam over Alaska. Those students are now decision-makers in Alaska and all over the world.

Along with that legacy, Dave left a nice example for aging with grace and happiness.

He always had a Science magazine open on his desk, his reading glasses resting on top. He sought out younger people to join him in adventures, such as skiing into his Quartz Lake cabin in the winter. And he kept that tall body moving, tending his small garden, burning brush and building chickadee nest boxes in the garage. 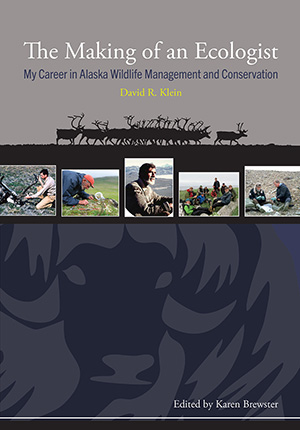 Dave Klein spent more than 60 years researching wildlife in Alaska and circumpolar regions and promoting the role of habitat in effective wildlife management of large hoofed mammals, including deer, moose, caribou, mountain sheep, muskoxen and mountain goats. He was valued for his understanding of how ecosystems functioned and the importance of interconnectivity for the conservation of species. He wrote or co-authored more than 130 scientific papers.

In 2019, at 92, he published a book with Karen Brewster on his life and philosophy of ecology, The Making of an Ecologist: My Career in Alaska Wildlife Management and Conservation.

Born in 1927, Klein grew up in rural New England. In a 2014 interview with former student and retired Alaska Fish and Game biologist Pat Valkenburg and oral historian Karen Brewster for a Wildlife Society conservation history project, he spoke of his childhood on a small family farm. “It was like Nirvana to me,” he said, “hilly pine forests, small farms and small villages.” He liked caring for animals and growing things – which would pay off later – but had an eye for the forest beyond. “I was interested in things around my grandfather’s farm, the trout stream and the deer that would come and eat his apples. I realized I was more interested in the ecology and the landscape.” 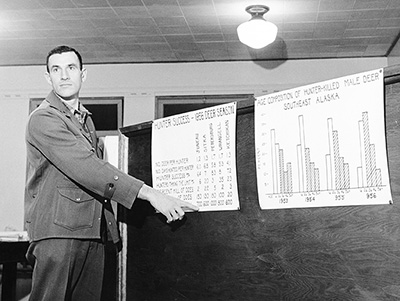 After high school and a year in the Navy (shortened when WWII ended) he worked with forestry crews in New England, gaining woodworking skills that later proved valuable. He rebuilt a Model A Roadster which he and a friend drove to Fairbanks in 1947.

He did carpentry work in Fairbanks and late that summer flew into the Brooks Range to work on a wilderness lodge on Wild Lake. “I did some terrific lake trout fishing, a little hunting for mountain sheep and moose, and I fell in love with Alaska. It was better than I had imagined in Alaska. I had decided by now to study wildlife management. I was focused on mountain ecology, arctic and northern. I was interested in plants as well as animals, alpine ecology, I fell in love with that in the Brooks Range.”

The University of Alaska in Fairbanks, recently upgraded from an agricultural school, did not yet have a satisfactory biology program, so Klein decided to return to Connecticut to attend college. He did not have enough money to make the trip south that fall, so he spent the winter of 1947/1948 in Fairbanks working at the university experimental farm’s dairy herd and taking some classes. He drove out in the spring when the roads cleared – a memorable year in Alaska that set the stage for his career. 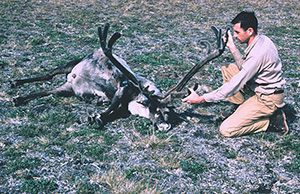 He earned a bachelor’s degree in zoology and wildlife at the University of Connecticut and returned to Fairbanks in 1951 to pursue a master’s degree through the newly formed Alaska Cooperative Wildlife Research Unit, conducting some of the first research on mountain goats on the Kenai Peninsula. He graduated in 1953, the third person to earn a Master’s in Wildlife Management at the University of Alaska Fairbanks.

After graduation, he learned that his year in the Navy did not exempt him from the draft, so he joined the Army and served in Alaska during the Korean War. In 1955, he was hired by the US Fish and Wildlife Service as the area biologist in Petersburg to manage deer in Southeast Alaska. In the late 1950s and early ‘60s he continued his deer work in Southeast while pursuing a PhD in Zoology-Ecology at the University of British Columbia in Vancouver. His dissertation was based on his work with deer, comparing population dynamics of high- versus low-density deer island populations. His related predator-prey study of wolves and deer on Coronation Island is a classic in wildlife research. 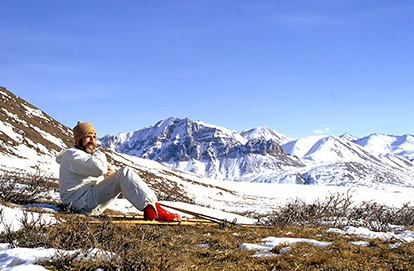 In 1961, as he was finishing his dissertation, he became one of the first biologists with the new Alaska Department of Fish and Game and moved his family to Juneau. He worked with James Brooks, the first director of the Game Division (and later department commissioner), who had been a biology classmate in Fairbanks. Within a few months, Klein was asked to lead his alma mater, the Alaska Cooperative Wildlife Research Unit in Fairbanks, but he was hesitant to take the position because of his commitment in Juneau. “I went and talked to Jim Brooks about it, and he said the best place for me would be there and I should take the opportunity,” he said.

In 1962, he moved to Fairbanks to lead the Alaska Cooperative Wildlife Research Unit, funded by the US Fish and Wildlife Service and administered by the University of Alaska Fairbanks, where he served for 35 years. He taught and debated the principals of wildlife studies and good science with graduate students, post-doctoral students and faculty within the Coop Unit, the Institute of Arctic Biology, and the Department of Biology and Wildlife Management at UAF. He was extremely active and hands-on in fostering and mentoring almost 100 graduate students and their field research. Klein was also influential in the establishment and management of the Institute of Arctic Biology and served on the board of the Institute’s Large Animal Research Station. 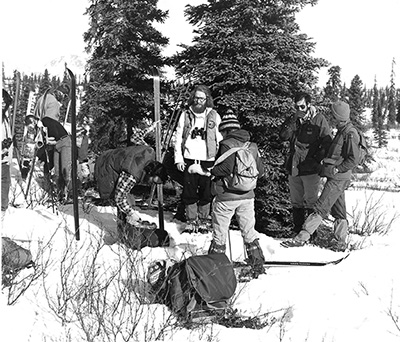 Wildlife biologist Scott Brainerd met Klein when he was a student at UAF in the 1970s. An Alaska Fish and Game biologist for many years, Brainerd also spent much of his career in Norway, where he lives today. He said as the leader of the Research Unit, Klein cooperated extensively with ADF&G and other agencies, primarily on arctic ungulate research. Brainerd wrote: In that capacity he had a huge impact on management of Alaska wildlife and trained many biologists who subsequently worked for ADF&G. He had a tremendous impact, perhaps greater than any other wildlife biologist in Alaska. He was a kind and generous man with a great sense of humor and a curious mind, and I will miss him.

Brainerd noted that Klein’s paper on the introduction, increase and crash of reindeer on St. Matthew Island is also a classic in wildlife research. Klein first visited St. Matthew Island in 1957 to investigate the island’s introduced reindeer population. He made subsequent trips in 1963 and 1966 documenting the reindeer’s decline and subsequent disappearance. His groundbreaking research demonstrated the connection between the reindeer, the lichen they were eating, and the impacts of severe weather events. Although the reindeer were gone by 1967, he continued to visit the island in 1985, 2005 and 2012 to research its ecological history, such as changes in the habitat and ecosystem, shifts in red and arctic fox populations, effects of climate change, and the connections between geology and cliff nesting sea birds. This type of long-term comparative research in a single location is unusual in science and is one of his major contributions to northern ecology. 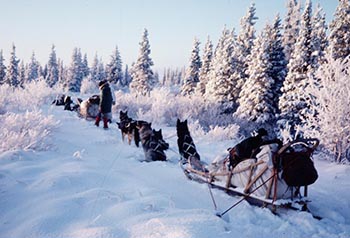 Dave with the dog team on the Stampede Trail, on the trip referenced by Rod Boertje. Dave Klein Photograph Collection. Courtesy of Karen Brewster.

Retired Fish and Game wildlife biologist Rod Boertje was another one of Klein’s graduate students in Fairbanks. He wrote that “Dave had all the building blocks for a student to be successful...probably long before I arrived in 1978.”

“Dave’s strengths in regard to his students were largely related to his familiarity with pertinent published literature, mentoring in editing/publishing, and his mentoring of students in field work and overall field logistics,” he wrote.

He added, “Dave accompanied me on two winter field trips on skis along the Stampede Trail north of Denali Park. On the second trip he stayed only a single night (after helping set up the wall tent) ...managing to ski out at 30 below just before temps dropped to 60 below for three nights and three days. We had borrowed the National Park Service’s dog team on that trip. NPS decided it was too cold for the dogs... so dogs were retrieved after first -60 night. I was able to view caribou most of that trip...so was successful documenting winter caribou activity patterns. I think all Dave’s graduate students likely had a field trip or two with Dave.” 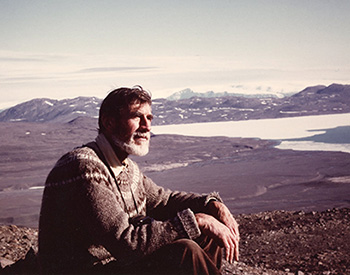 Klein established many pioneering collaborations with ecologists outside Alaska. He was frequently asked to join and advise research projects across the circumpolar north. He brought his family to Denmark and Norway on projects and trips in the late 1960s and early ‘70s, and did field research in Norway, Greenland and Iceland in the 1980s and 1990s.

In the 1970s and ‘80s, he participated in scientific exchange visits to the USSR and the Russian Far East to share scientific understandings, research techniques, and do joint projects with Russian caribou and muskox biologists. With colleagues at UAF, he proposed and helped organize the First International Reindeer/Caribou Symposium held in Fairbanks in 1972 and the First International Muskox Symposium in 1974. These were well attended and continue today as the International Arctic Ungulate Conference. His connections with scientists in Canada, Russia, Scandinavia, Iceland, Greenland, Portugal, and South Africa led to many fruitful exchanges, collaborations, and friendships over the years. He also was one of the first officers of the Alaska chapter of the Wildlife Society and remained active in that organization throughout his life. In 1999, he was awarded the Wildlife Society’s Aldo Leopold Award, which he considered the most significant of all his accolades since he considered Aldo Leopold as one of his early inspirations. 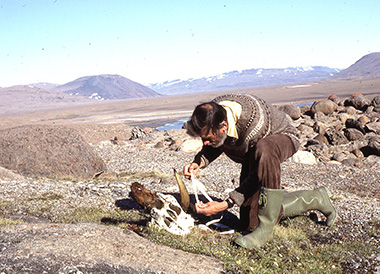 Klein served as Unit Leader for the Cooperative Wildlife Research Unit until 1991, when his position changed to Senior Scientist with the Unit; he retired in 1997 as professor emeritus. He continued to publish research and promote interdisciplinary projects through his friendships and mentorships for the next 23 years. Dave Klein was fortunate to find success in a career where he could combine his love of the outdoors with his talents for observation and making ecological connections and his enthusiasm for sharing his scientific knowledge and ideas. He has left a significant legacy within Alaska wildlife biology, management, and conservation. 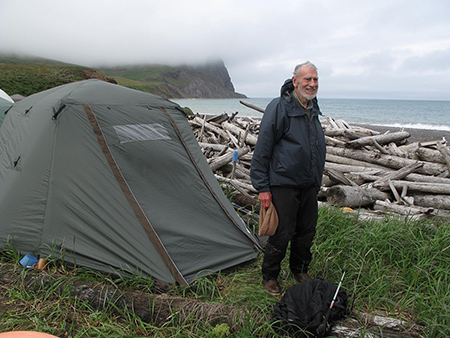 The Making of an Ecologist: My Career in Alaska Wildlife Management and Conservation.

A video interview with Dave Klein from 2014 with Pat Valkenburg and Karen Brewster as interviewers.

Thanks to Karen Brewster, Ned Rozell and Scott Brainerd for their invaluable contributions and help. Karen Brewster provided captions and many of the pictures from the Dave Klein Photograph Collection. Ned Rozell provided pictures and shared his thoughts on Dave Klein from his Dec. 21, 2020, Alaska Science Forum Column, “Time Stands Still on Winter Solstice.” This article draws from the aforementioned video interview, Scott Brainerd’s review of Dr. Klein’s book in the July 2020 issue of Arctic, as well as Klein’s obituary.