By Coowe Walker and Tammy Davis 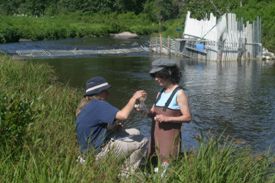 This summer was rife with spawned-out salmon rotting on river banks in the hot sun. The smell can be off-putting, but the value of those decomposing salmon to the food web is striking. Coowe Walker, a watershed specialist with the Kachemak Bay Research Reserve, is looking at how nutrients from returning salmon support stream food webs, and especially how they contribute to the development of young salmon.

Walker and other researchers are using the North Fork and Chakok branches of the Anchor River north of Homer as their study site. They are interested in how decomposition of salmon may contribute to healthier salmon populations and to increased salmon returns.

“I find this project fascinating because it looks indepth at the incredibly extensive connections between ecosystems. I think it is amazing how every process relies on others; every plant, bug and fish is greatly influenced by tiny changes in its environment,” said Lisa Tracy, an intern working on the project.

As young smolt, Pacific salmon travel to the sea where they spend several years feeding on the ocean’s bounty, gaining 90 percent or more of their weight before returning to the streams where they were born to spawn, die and decompose. While maturing at sea, salmon accumulate marine nutrients. When they return to freshwater to spawn they transfer that stored biomass to the stream habitat. The decomposing carcasses contribute food for the entire ecosystem.

Scientists have developed a technique called stable isotope analysis to measure the proportion of carbon, nitrogen and sulfur in animals’ tissue. These elements can be traced as animal protein – such as decomposing salmon – becomes integrated as nutrients into the food web. These elements have distinct signatures that reveal their origin. The stable isotopes of nitrogen and carbon found in the ocean are heavier than those on land, allowing scientists to distinguish between nutrients derived from ocean or terrestrial sources. These heavier isotopes end up in the food chain of freshwater watersheds when salmon migrate upstream to spawn. The productivity of Anchor River food webs can be traced by examining marine-derived nutrients transported to freshwater stream systems by salmon. 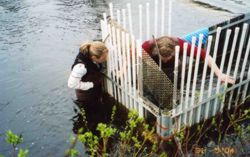 Researchers in Washington state have found that salmon provide food for at least 137 species of microbes, stream invertebrates, mammals and birds. Coowe Walker believes that these “salmon-derived” nutrients are important to the health of stream ecosystems, and especially to the growth and development of young fish. She asks, “How can we know?”

To answer this question, researchers working are sampling water chemistry, adult and juvenile fish, stream invertebrates and vegetation at seven locations, from the headwaters to the river mouth on the North Fork and Chakok branches of the Anchor River and Happy Valley Creek. The Anchor River and its branches support runs of chinook and coho salmon, but the Happy Valley Creek does not have salmon runs due to a natural waterfall barrier.

Chinook (king) salmon and coho (silver) salmon migrating upstream are trapped for study by a weir that Division of Sport Fish employees helped install. All captured fish are counted and a subsample of fish is measured for length, girth, and sex. A scale is removed to age the fish. Weir technicians Justin Theriot and Melissa McCray are careful to gently handle fish so that they can continue their upstream journey unharmed.

“We can relate this biomass to the nutrient loads in the system,” said Walker.

She offers a premise. “As part of this study we will be measuring fatty acid and lipid levels in juvenile fish,” she said. “Fatty acids create lipids, which are fats. Greater fat content, especially ‘good fat’ is thought to lead to increased growth rates and body size, which would help fish survive.” Recent evidence suggests that higher levels of omega-3 fatty acids (the same ones that are publicized as being healthy for humans and one of the reasons Americans should eat more salmon) are present in fish when salmon-derived nutrients are present.

In addition to monitoring fish, project scientists also sampled water chemistry at the weir site. Both living and dead fish release nutrients into the water - living fish expel wastes as part of their bodily functions and dead fish decompose.

“We intend to find out if it’s possible to use changes in water chemistry as a measure of fish number in streams,” said Walker.

When migrating salmon enter a stream their normal body functions (urination) cause increases in nitrogen in the form of ammonium. Once they spawn, die and begin decomposing, nutrients contained in their bodies are released into the water causing increases in nitrogen in the forms of nitrate and ammonium. Project researchers will measure nitrate and ammonium levels frequently at the weir site during the salmon runs to determine if there is a consistent correlation between these nutrient levels and fish numbers. If there is a connection, it may be possible to develop a method that uses stream chemistry as a tool for assessing salmon escapement.

This project is a collaborative effort between the Research Reserve (part of the ADF&G Sport Fish Division), the University of Alaska Fairbanks, School of Fisheries and Ocean Sciences, the US Geological Survey, Denver, and the National Marine Fisheries Service, Auke Bay Laboratory, with additional support from the Sport Fish Division. Additionally, it is funded in part by the Gulf Ecosystem Monitoring program of the Exxon Valdez Oil Spill Trustee Council.