By Chuck Pratt and Jason Woodhull 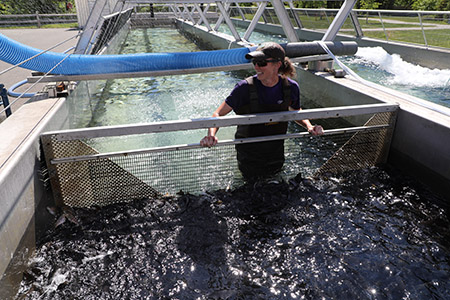 If you picture a fish hatchery, a series of long rectangular tanks comes to mind. These tanks, known as raceways, are water intensive and work well in hatcheries with an abundant supply of fresh, cold water. But fish culturists are looking at options and innovations in Alaska hatcheries are providing alternatives to the traditional methods.

Circular tanks are self-cleaning and can reuse a significant portion of the water – a major benefit that’s contributed to their growing popularity. They are used at the Alaska Department of Fish and Game’s William Jack Hernandez Sport Fish Hatchery in Anchorage. But the new tanks require new methods when handling fish for sampling and transfer activities.

Historically, the Elmendorf and Fort Richardson hatcheries reared fish in long rectangular raceways. While crowding fish together with a flat screen pushed from one end to the other was effective, raceways were water and labor intensive. Circular tanks leave the fish culturist with a square peg and a round hole when it comes time to crowd fish.

Staff at the William Jack Hernandez Sport Fish Hatchery have worked through this conundrum: progressing from three-panel crowders to purse seines. Steady improvements in technique and tools have now made it possible for one person to easily seine a 26-foot tank.

A seine is folded on the rim of a round tank; the floats keep the top edge of the seine net at the surface, and the netting hangs like a curtain underneath. Note the pole bracket held in place with clamps on the side of the tank.

In 2011, during the initial phase of the Hernandez Hatchery operations, culturists built three-panel crowders for use in the 26-foot diameter by six-foot deep tanks, of which there are 31 in the hatchery. The crowders were made up of two long sections and one short section. When in use they looked like a piece of pie with the first bite out of the tip. The crowders proved cumbersome to move around the production floor into the tanks. Once in the tank, crowding and pumping the first 90 percent of the population worked well. But removing the last 10 percent was frustrating and time-consuming.

Hatchery staff worked with Christiansen Net Works to develop a purse seine which is a net that can be formed into a bag using a line along the bottom pulled under the fish to make a bag like drawstring purse. Different mesh sizes were needed depending on the size of fish being worked; 3” smolt, 10” catchable, or the 26” brood. Improvements included sleeves for poles on the seine ends to aide in controlling the seine around the tank and prevent fish from escaping between the seine and the tank walls. A red cork installed at the center of the seine helps to maintain a symmetrical bag when pumping.

Round tank seining at the hatchery

Over the years, staff have learned techniques and added tools to make the seining process smooth and efficient. “It is important to realize that change can be a good thing,” said Fish Culturist Jason Woodhull. “Doing the same thing only because that’s the way it has always been done is making an excuse to not reevaluate procedures as new techniques and tools become available.”

Improvements can be as simple as modifying how fish are released from a net. “The first time we released the fish by opening the upstream side of the seine and we realized how calmly they swam away. The technique has been standard operating procedure ever since.”

Additional improvements include seining the tank in the direction of the current, which allows the culturist to easily guide the seine around the tank. Clamp-on pole handles for leverage while trying to keep the seine tight against the tank improved ergonomics. The judicious use of a plunger which makes bubbles helps to move fish away from the seine edges into the bag. For smolt, adding pool noodles to the middle section of the corks minimized fish loss over the top of the seine between the corks when pumping from a tight bag. 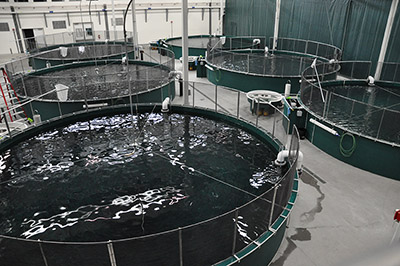 A pole bracket clamped to the side of the tank holding the purse end of the seine is by far the biggest improvement. Now, one person can seine a tank. The bracket slides over the seine pole and holds the stationary end tight against the tank while a culturist circles the tank with the net. Once the purse line is pulled, the clamps holding the bracket are released, poles pulled up then rings pulled over the side to complete the set.

The crowders now rest against the wall, not having been used in years. Seines are used exclusively in all tanks now – 10 feet, 16 feet and 26 feet diameter. Culturists now cannot remember how vexing this operational challenge was or how the initial surge of cold water into leaky raceway waders previously felt.

Chuck Pratt and Jason Woodhull operate the Broodstock Development Center at the William Jack Hernandez Sport Fish Hatchery of the Alaska Department of Fish and Game in Anchorage, Alaska.