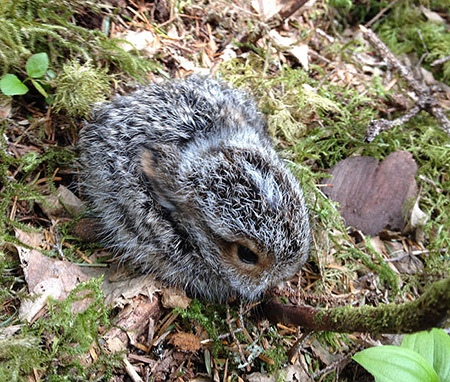 A young snowshoe hare; baby hares are called leverets. Because hares rely on camouflage, they may remain still when approached. This does not mean they are in trouble, and they should be left alone. Photo by Dave Gregovich

Newborn moose calves, deer fawns, and tiny bear cubs are being seen in Alaska, the first of many calves, cubs, kits, and chicks Alaskans expect to appear between now and the end of June. Biologists are warning Alaskans who may encounter newborn wildlife to resist the urge to approach or “rescue” them.

“There have been instances where people have picked up and tried to care for a deer fawn,” he said. “A few years ago we learned a woman was taking care of an otter.”

He appreciates that people are well-intentioned but wishes they would not put themselves in these roles. “Please leave them alone and contact Fish and Game if you are concerned.” 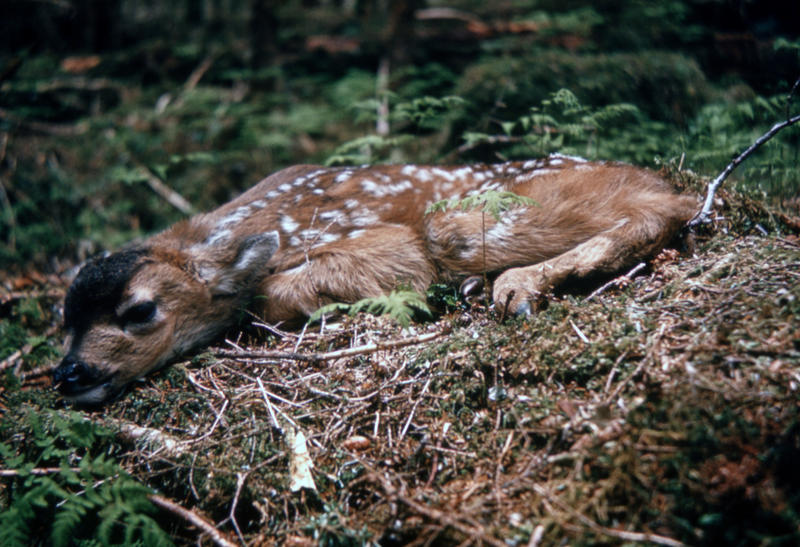 “Does will cache them for several hours while they go off and feed,” he said. “It’s a strategy. It’s safer for the fawn to not be with the doe while she’s feeding. It’s not orphaned, and people are actually kidnapping it.”

Tony Hollis in Fairbanks said the office there gets a few calls about moose calves each year, “but a majority of the issues are with the public bringing in young birds, hares, squirrels, and fox pups in a box and asking us what to do with them.”

“They might be abandoned, but probably not and they have a better chance out there,” he said. 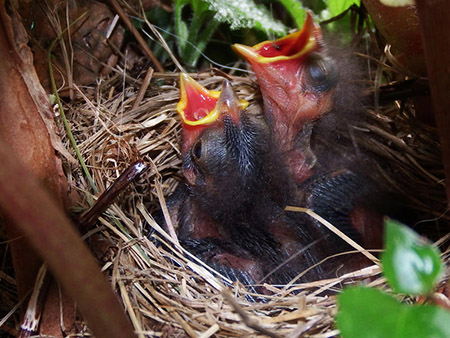 Junco nestlings. Baby birds should be left alone in the spring. Photo by Linda Shaw.

If a moose calf or bear cub is encountered without its mother immediately in view, be alert in case you’ve walked between them. The best course of action is usually to back away and leave from the direction you came. Also, do not assume young animals found alone are orphaned. Mother moose and bears frequently walk out of sight, cache their young, or become separated from them by fences or roads. Sow bears often send cubs up trees to wait before leaving to find food. In nearly all cases, the mothers return to their young.

Battle also advises Alaskans to take steps to avoid potentially dangerous encounters with wildlife mothers. “Try to avoid single tracks and narrow, brushy trails where limited visibility might lead to a run-in with a cow moose and calf.”

Bicyclists and runners should be especially alert as they can swiftly top hills or round corners and run into moose, bears and other wildlife. Making noise to alert wildlife to your presence is always a good precaution but may not be enough when speeding down a trail to avoid clashes with moose cows with calves.

“Newborn moose calves aren’t able to run from predators – or from pets or people on bicycles,” Battle said. “Mothers are likely to stand their ground, even when they hear you coming.”

Even when young animals truly are orphaned it’s best to leave them alone. Don’t attempt to feed or pick them up; this type of contact with animals is illegal and could result in a citation and fine. Lingering near or approaching a young animal for a photo may discourage the mother from returning. 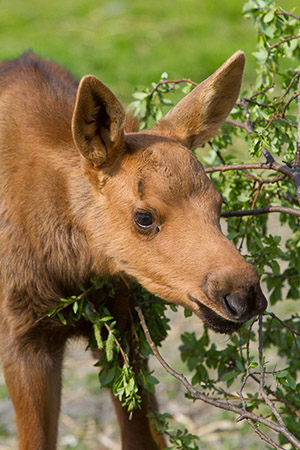 A captive moose at the Alaska Wildlife Conservation Center. Mother moose are notoriously protective of their young and statistically are more dangerous than bears. Don't approach young moose. Photo by Dave Lindstrand/AWCC.

If you observe a young animal that appears to have been left alone for more than 48 hours, contact the nearest Alaska Department of Fish and Game office during regular business hours, or use the department’s smartphone-friendly link to file a report online by visiting http://www.adfg.alaska.gov and clicking the “Report a Wildlife Encounter” button. If a situation involves an immediate public safety concern, call 9-1-1.