Learning to Love Life on Snowshoes 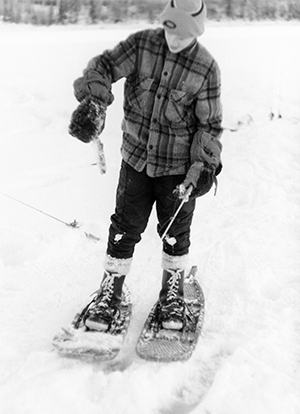 Still wearing his trapper snowshoes, the author, at age 13, examines a tiny kokanee he caught from Scout Lake in 1971.

When I was in elementary school, my father decided it was time for me to experience the joys of snowshoeing. He’d already taught me how to freeze my tail off while ice-fishing, and how to sweep the porch and shovel snow. While waiting for me to grow large enough to tromp around in a pair of his old, heavy military-issue cross-country skis, he probably figured it was about time to introduce me to another method of travel in the great outdoors.

In the mid-1960s, snowshoeing came with two basic options, both crafted from strips of wood and animal hide: There was the long, traditional “trapper’s shoe” or the shorter, rounder versions in either teardrop or bear-paw form. Dad opted to train me on a pair of bear paws.

Those who know snowshoeing and have spent time on bear paws understand that the learning curve can be steep. Bear paws are roughly oval, and their width tends to force the user’s legs farther apart than natural, forcing a pronounced waddle more than a regular walking stride. The adjusted gait can cause inner-thigh discomfort over the course of a long day out on the snow. Also, because bear paws, unlike teardrops, have no tails that drag like rudders to keep the snowshoes properly aligned, they can be “sloppy” underfoot. Even extra tightening of the bindings—in those days little more than straps of leather and some heavy-duty laces—could not always guarantee consistent tracking as the shoes attempted to rotate around the user’s feet. 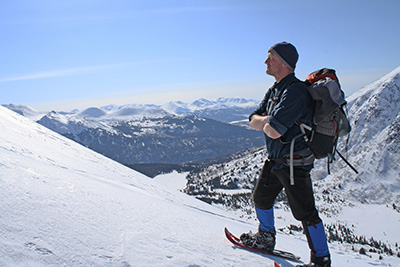 The snowshoe-clad author basks in warm spring sunshine high above the Fuller Lakes, 2012.

Bear paw snowshoes are also generally flat. They lack the curved-up toe of the trapper’s shoe, and therefore the novice user must learn to lift the front of his/her foot to begin each step; otherwise, the leading edge will catch in the snow and pitch the user into a face-plant.

In those days, too, it was considered a sissy move to use ski poles or hiking poles to help remain upright while ambling over the snow. And since my father and I usually wore snowshoes in either the deep woods or out onto lakes to go ice-fishing, we were often carrying rifles, fishing rods or axes, thus complicating our ability to defend ourselves when toppling over.

Despite these negatives, however, the bear-paw style offered distinct advantages. Bear paws are extremely maneuverable in heavy timber or when stepping over deadfalls, whereas the much longer trapper-style shoes can make for difficult navigation over such terrain. 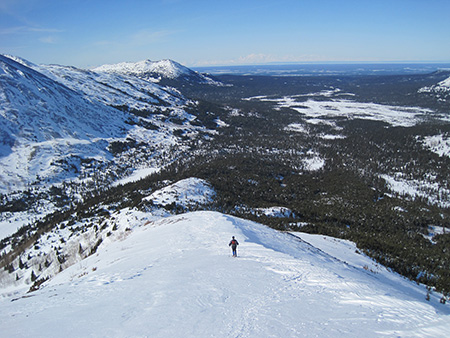 A pair of snowshoes and some gumption can really open up the winter landscape, as in this scene near Fuller Lakes, 2012.

The history of snowshoeing goes back thousands of years. Peoples inhabiting northern climes—perhaps observing how the large feet of a lynx or hare enabled it to glide over deep snow that hindered other creatures, including themselves—strove to create footwear that would spread out their weight and allow them, too, to float rather than sink. Snowshoes greatly enhanced winter travel, primarily for hunting or migration, and were one of the cultural elements common among peoples of otherwise decidedly different traditions in the great expanses of northern Europe, Asia and North America.

There was even a little-known Battle on Snowshoes, in 1758, fought in what is now upstate New York between British Ranger companies and allied French and Indian troops during the French and Indian War. The battle received its name because the British troops were wearing snowshoes, and the story would be a sexier example of the advantages of snowshoes if only the French side hadn’t won so convincingly.

As cumbersome as traditional snowshoes could be at times, I enjoyed the benefits they offered in deep snow, particularly when it came to breaking trail. On cross-country skis, one could still wallow in deep powder—not so much on snowshoes. 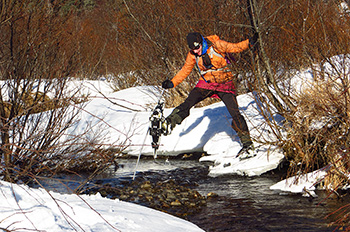 Even snowshoes can't help with every wintry obstacle, such as this stream crossing near Dillingham in 2016.

Still, as I navigated through adolescence and into early adulthood, I began gravitating more toward skiing because, overall, the pace was brisker and the downhills were more exhilarating.

It wasn’t until I hit my mid-thirties that I began moving back to snowshoes as a preferred method of winter travel. I had never mastered telemark or backcountry skiing, but I loved being in the mountains in winter. Snowshoes enhanced my ability to get there.

I quickly learned, however, that to get fullest advantage from snowshoe travel, I needed to change with the times. I began by hanging up my wooden snowshoes—by that time I had inherited Dad’s old bear paws and trapper’s shoes—and turning them into more conversation pieces than tools of the outdoors. I then purchased my first pair of aluminum snowshoes and a pair of trekking poles that telescoped to various heights and had baskets on the pointed ends. 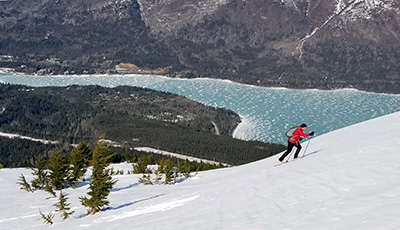 Hinged bindings greatly improve the facility of snowshoes on steep slopes, as shown here on Cecil Rhode Mountain near Cooper Landing in 2018.

My Tubbs 36-inch snowshoes had aggressive crampon-like claws on pivot points beneath the bindings. This design allowed my feet to remain level while climbing and allowed the snowshoes to grab and hold in the snow.

But these new snowshoes weren’t without problems. The webbing of a traditional snowshoe had been replaced by a solid flap of material, and on descents it could act like a ski, causing one’s feet to fly forward faster than the rest of one’s body. Thus, butt-plants took the place of face-plants.

I also learned that those snowshoes could be equally as slick and frustrating during spring side-hill travel over a hard crust of snow.

Ultimately, I ventured into Alaska Mountaineering and Hiking in Anchorage, informed the sales clerk there of my complaints and asked for some recommendations. About an hour and $200 later, I emerged from the store with a pair of MSR Denali Ascents, narrow enough to allow for a natural stride and only 24 inches long, with attachable tails that could increase their length to 30 inches for travel in deeper snow. In addition to the crampon beneath the pivot point, there was on each underside a serrated blade of metal, perpendicular to the crampon’s teeth, that greatly inhibited side-slide on crusty, angled slopes. 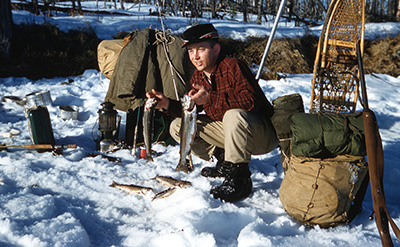 The author's father displays a pair of rainbow trout he caught in 1959 after snowshoeing into a good ice-fishing spot on Kenai Lake.

The result was greater mobility and stability. It was possible even to run on such snowshoes. And so the alpine winter world opened up, and my winter-happiness quotient improved tremendously.

I still own my dad’s old wooden snowshoes, although I haven’t strapped them on in many years. Whenever I need to burrow through the mess in my storage shed, I eye with nostalgia the old shoes as they hang from ten-penny nails embedded in the wall studs, and I recall with a smile my dad lacing my small, red rubber boots into the bear-paw bindings and telling me how much fun this was going to be.

Despite an occasional face-plant, he was right.

Clark Fair, a lifelong Alaskan, grew up on a homestead in Soldotna, and taught high school English for 20 years. He now lives in Homer, works part time for Kenai Peninsula College, and has been a freelance writer and photographer for the last decade.

Any references to specific products or businesses in this story do not imply an endorsement.