Give Your Hazards a Flash to Avoid a Crash 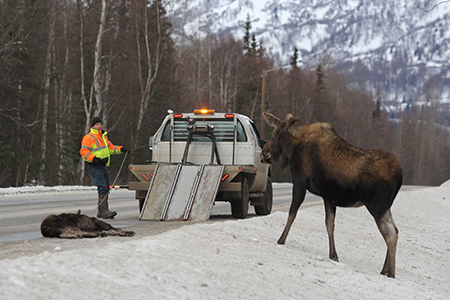 A cow mooses watches as her road-killed calf is salvaged. Photo by Brian O'Connor

One of the most challenging parts of living in Alaska is driving in the wintertime. Not only are roads slick, but visibility can be limited by darkness and blowing snow or sleet. Drivers are also likely to encounter moose and other wildlife crossing the road. Moose can weigh in at 400 pounds for a winter calf and 1,600 pounds for a very large bull. These lanky giants tend to gravitate to plowed roads when snow is deep and heavy elsewhere. This creates a major safety hazard for moose and motorists. Per mile driven, Alaska has one of the highest rates of moose-vehicle collisions in the world. More than 800 moose are killed in collisions each year and people are often injured or killed too. We can assume many more accidents occur where the fate of the moose is unknown, whether it survived with minor injury or wandered into the woods and died later.

As a driver, you might wonder what areas are most dangerous and where you should be extra vigilant about looking out for moose. Alaska Department of Fish and Game and its partners have developed a Moose Vehicle Collisions story map — an interactive tool that allows you to explore maps of Alaska comm 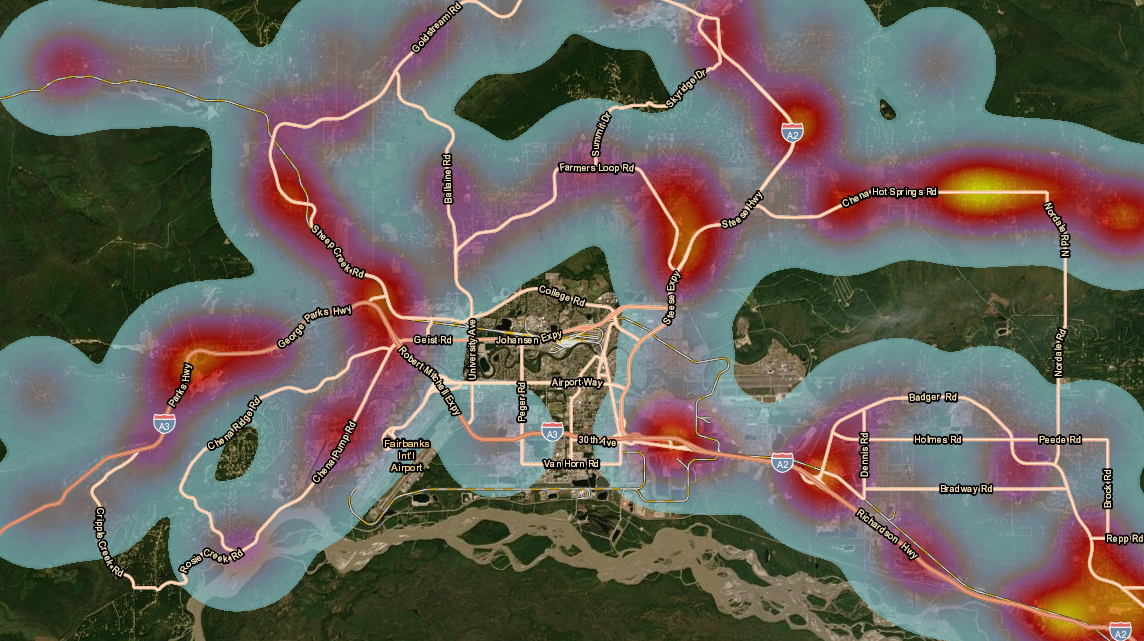 unities with the highest rates of moose-vehicle collisions, including Kenai Peninsula, Anchorage, Matanuska-Susitna Valley, and Fairbanks. Click on a community and a heat map appears, illustrating where moose collisions are most common. Zoom in and you can view accidents that occurred from 2013 through 2016. For each accident, a pop-up window displays the date, time of day, weather, lighting and crash severity. Currently, Palmer wildlife biologists collect this information throughout the Matanuska-Susitna Borough. Data for the rest of the state is collected by Alaska Department of Transportation and Public Facilities and is later shared with ADF&G. It requires a lot of resources to gather and analyze data for each moose-vehicle collision, resulting in a delay of recent accidents being shown. With that said, ADF&G intends to update the maps over the years as new information becomes available. 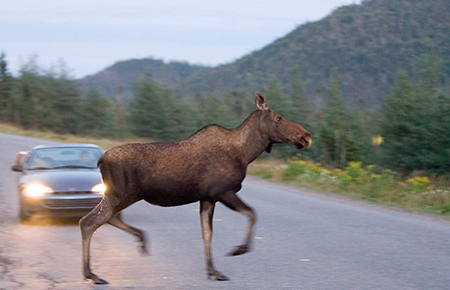 You might be wondering why it is called a story map? Simply put, story maps have the ability to relay more information than a map would on its own. The Moose Vehicle Collision story map goes beyond sharing information about collisions and delves into Stories from the Road, a page dedicated to real Alaskans sharing their experiences. You might want to knock on wood if you have never been involved in a moose-vehicle collision; many of our interviewees shared a similar notion — it happens fast, and it can happen to even the most cautious of drivers.

What can you do to avoid a collision? ADF&G encourages drivers to slow down, look around, and flash your hazard lights to alert other motorists to the presence of moose on or near the road. We are also introducing a new mascot, Miles the Moose. You may come across him in a variety of settings, including on the story map, ADF&G’s Driving in Moose Country webpage, on DMV monitors, in the newspaper, on social media, at community presentations, and on bumper stickers.

You may even hear his voice on the radio reminding drivers to “Give your hazards a flash to avoid a crash!” Our hope is that Miles the Moose becomes a well-known ambassador for drivers and wildlife for years to come.

Video: Give your hazards a flash to avoid a crash