By Sue Rodman and Miles Spathelf 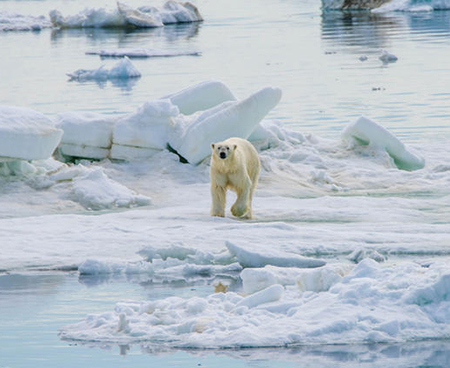 Polar bears are aggregated on the WAFWA CHAT in the Crucial Habitat Rank display and in the Species of Concern layer; this category includes threatened and endangered animals. Within the AHMG Marine Mammals display of Alaska’s CHAT, polar bears are displayed by coastal denning areas and general distribution. Within the hexagon framework, these specific site locations are buffered as protected by Alaska Statute which prohibits the release of denning sites, along with other species location data. Photo by Justin Jenniges, (USFWS permit #: MA039386-2).

For the last decade, the Alaska Department of Fish & Game (ADF&G) has participated in the development of the Crucial Habitat Assessment Tool, also known as CHAT. Originally, ADF&G’s affiliation with this tool began in 2008 through the Western Governor’s Association. In 2015, the project was transferred to the Western Association of Fish & Wildlife Agencies (WAFWA). We first reported on this project here in June 2014 with sample map products and explanations on how this tool could support conservation with respect to development and various landscape level interests.

The WAFWA CHAT is supported by many western states and interest from British Columbia and the Yukon Territory. While its mission and intent remain the same, the map products and partnerships have matured in recent years to a CHAT mapping application that displays the relative importance of wildlife habitat in each state participating in the CHAT project. The project is tiered in that the west-wide view supported by WAFWA is a combined, coarse-scale assessment of habitat value across states. The state view reflects an individual state fish and wildlife agency’s assigned value of current landscape level information. This varies across western states as they each choose on how they represent species or species group, geographic resolution, habitat or range attributes, and other related information.

Further, assimilating Alaska’s fish and wildlife information into CHAT-style products will be a long-term and beneficial process in that the department does not currently store species level data in one place for analysis or synthesis. Rather, species research is analyzed internally by region and project. Considering the five regions of the state within ADF&G’s Division of Wildlife Conservation (DWC), combining data sets is challenging but benefits conservation and development planning by addressing the landscape scale of species’ ranges and seasonal patterns. The CHAT project has motivated the development of a statewide data management system to ensure that wildlife research data is stored, analyzed, and synthesized in a meaningful location and with a structured process.

A Crucial Habitat Assessment Tool (CHAT) is a nonregulatory tool meant to provide a common starting point for the intersection of development and wildlife. The desired outcome is to reduce conflicts and surprises while ensuring wildlife values are incorporated into landscape planning. Currently CHATs developed by individual states consist of a hexagonal coverage of the landscape that incorporates ranked values of important habitats as determined by the respective state fish and wildlife agency.

Alaska’s version of the CHAT is still in progress but gaining momentum as the data management system is continued. Many map products are available, but many are yet to be created or combined across regions. As a functional base layer, ADF&G’s Habitat Management Guides are now digitized; they delineate important habitat for individual species by DWC region across the state. When applicable, important life stages are also mapped for game species. For example, nesting and rearing may be indicated for bird species where the information was known.

To display wildlife information that can also be queried, WAFWA designed a hexagonal framework that lays a virtual ‘honeycomb’ across the landscape. Within each square mile of area represented by one hexagon, a query or pointer tool can access the wildlife and habitat attributes within. This framework exists also on the Alaska CHAT, so ranked values from western North America can be combined with the information available from the digitized Alaska Habitat Management Guides. When zoomed out, the one mile hexagons become 7 square mile cogs.

Updates to Alaska’s CHAT web page will guide interested parties to displays available for marine mammals, terrestrial mammals, and birds. Descriptions are also posted for each of Alaska’s layers attributed on the WAFWA CHAT. 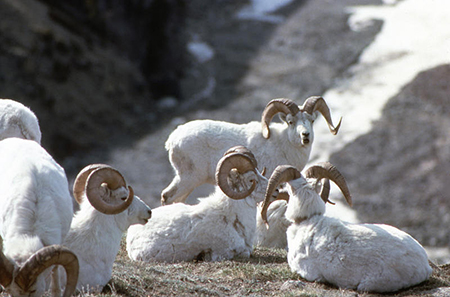 On the WAFWA CHAT, Dall’s sheep are not currently ranked in any of the Alaska displays, but we will have a layer of game animals and fur bearers on that page in the future. Other states do this under a layer called “species of economic and recreational interest.” On the Alaska CHAT, the AHMG Terrestrial Mammals link has a Dall’s Sheep layer that displays several attributes of its habitat such as winter use areas, mineral licks, and general distribution.

On the WAFWA CHAT, the three distinct map products for Alaska identified in the list above are combined with species richness and additional species identified in Alaska’s State Wildlife Action Plan to form the Crucial Habitat Rank, identified on the legend as ‘CHAT Rank.’ This view shows the relative importance of wildlife habitat across the state based on these input layers. More data layers are in progress and will eventually contribute to the ranking schema.

In the coming years, we have outlined the next steps for Alaska’s CHAT to include more functionality along with expanded display of wildlife information.

While the process has been slow to produce Alaska’s CHAT, we have overcome significant hurdles. The data management system being developed now will dramatically increase the security of wildlife data over time, along with access for future comparative studies. Having established a portal for viewing wildlife information along with the hexagon framework, the public will gain access to map products and details that display this valuable trust resource across Alaska. The variety of spatial features that can be displayed within this application allows ADF&G to share information readily. With the coarse-scale view, private and public conflicts cannot be recognized; the non-regulatory nature of this application means that it provides information that directs the user to concentrate further inquiry toward specific questions. Eventually, more contact information will become available so that map products are correlated with ADF&G offices. Fine-scale information can then be requested for specific projects and areas.

This interim progress report intends to keep the public informed about one of ADF&G’s ways to improve communication and outreach for Alaska’s fish and wildlife resources.

Sue Rodman and GIS Analyst Miles Spathelf are part of the Wildlife Habitat Enhancement & Spatial Analysis Program At the Alaska Department of Fish and Game.