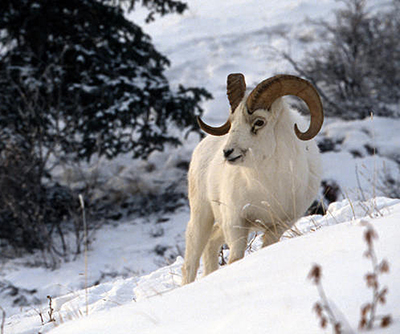 Dall's sheep are among the animals that Fish and Game monitors as part of the Wildlife Health and Disease Surveillance program.

Reports like these are helping Fish and Game to better understand and maintain wildlife health in Alaska. The department is monitoring a variety of wildlife diseases and wildlife issues, including: ticks on pets, people or wildlife, distemper in foxes, any reports of mule deer or white-tailed deer in Alaska, sick or dead bats, suspected occurrences of tularemia or rabies, and respiratory pathogens in Dall’s sheep, mountain goats, and other ungulates.

Two reports in late summer of 2019 of dead Dall’s sheep were particularly helpful.

On July 29, 2019, a dead Dall’s sheep ram was spotted by a pilot in the Tok Management Area (TMA) and reported to Fish and Game. On Aug. 1 Tok Area staff flew to the location and picked up the partially scavenged carcass and shipped the head, heart, lungs, liver, rumen, and a front leg to Fairbanks. On Aug. 2, Wildlife Health and Disease Surveillance veterinarian Dr. Kimberlee Beckmen examined the carcass and determined the cause of death was pneumonia. 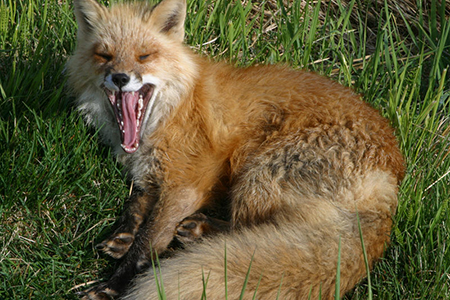 A red fox yawns. Fish and Game would like any reports of sick or dead foxes. Photo by Jim Dau.

On Aug. 20, a dead Dall’s sheep ewe and a live lamb were spotted in GMU 12 and reported to ADF&G. The next day Tok Area staff collected the carcass of the ewe. The lamb was euthanized. Both carcasses were shipped that day to Fairbanks, and Dr. Beckmen necropsied the animals. The cause of death for the ewe was mastitis.

“The fresher an animal is the better,” she said. “When we received those reports, we went out and got those sheep with helicopters, it’s that important. We want to hear about anything unusual that hunters see - animals coughing or sick, or dead.”

These reports do not imply a new problem with Alaska’s Dall’s sheep. The number of sheep observed during survey of the Tok Management Area in July 2019 was comparable to recent years. That suggests no indication of a significant increase in mortality and that the population is stable. With few exceptions, observed and harvested sheep have appeared healthy.

Dall’s sheep are not the only animals of interest to biologists with Fish and Game’s Wildlife Health & Disease Surveillance Program. In late August, two dead wolf pups were reported near Delta Junction and were quickly picked up by Fish and Game staff. Dr. Beckmen said it’s unprecedented to find dead or sick wolf pups, as they usually die in the den and are never found. These pups will provide an opportunity to look at diseases such as distemper, which can affect domestic dogs, wolves and foxes. 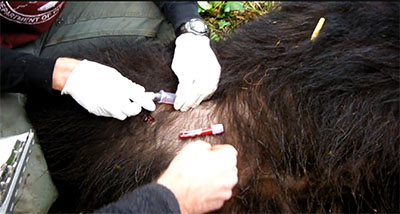 “When we get them really fresh, we are able to get a handle on which pathogens and parasites cause death,” she said. “Thanks to the public’s help in getting these reported, we are really learning what diseases might be significant and we’re finding new things we’d never have known about.” 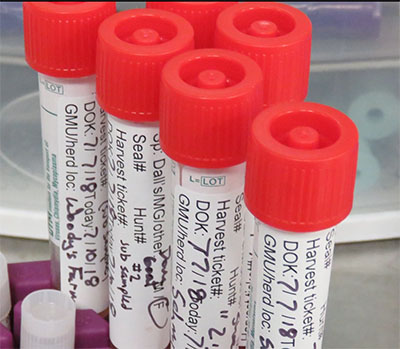 “The recent outreach about ticks has been very successful,” Dr. Beckmen said. “I’m getting at least one or two calls a day with questions about potential abnormalities on wildlife, dead animals or ticks on pets. Our biologists can’t find things like this without the public’s help and they are doing a great job.”

Not every dead animal is important, but it might be, so it’s worth a call to Fish and Game. “We handle these on a case by case basis, and we want to take advantage of every opportunity to investigate a report,” said wildlife biologist Darren Bruning.

Outreach in the fall of 2018 alerting hunters to efforts of the ADF&G to learn more about Mycoplasma ovipneumoniae (M. ovi, for short) received a welcome boost. Providing specimens from the field, hunters from around the state helped the department collect samples from more than 330 Dall’s sheep, 110 mountain goats, 100 caribou, and 100 moose. In 2019, 78 nasal swab samples have been collected during hunter harvest surveillance and tested. 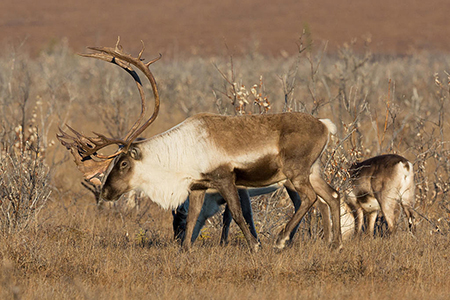 In 2018, hunters from around the state helped the department collect samples from more than 330 Dall’s sheep, 110 mountain goats, 100 caribou, and 100 moose.

M. ovi is a respiratory bacterium that can cause disease in susceptible hosts and is sometimes found in domestic sheep, goats, and wild sheep and goats in the Lower 48. Animals can carry the bacteria while showing no signs of illness.

To report a sick or dead animal, contact the local Fish and Game office, or contact Dr. Beckmen at the Wildlife Health & Disease Surveillance Program

A wildlife biologist bands a little brown bat in Southeast Alaska. Researchers are studying bats in Alaska, and also monitoring for rabies and other potential diseases.

More on sick or dead bats

Deer: Any deer, dead or alive, reported in Interior or Eastern Alaska are important to document. Call the nearest area office. Contact Dr. Beckmen regarding dead deer in Interior Alaska.

Rabies – Facts about rabies and trapping