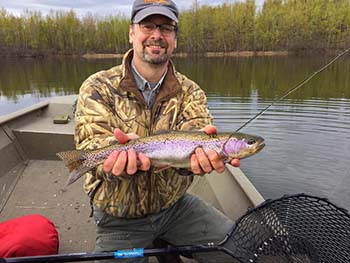 Several miles downstream of the Kenai-Russian River confluence, I stepped off the one-man pontoon raft Danny Z. had loaned me and pulled my 8-weight fly rod from the rack. It was late September and the cobble bar and surrounding shallows were littered with the carcasses of spawned-out salmon — reds mostly, dwarfed by a few old kings thicker and longer than a big man’s leg. They lay on their sides, poked and torn by eagles and gulls, empty eye sockets gaping skyward; the air was foul with decay.

Danny pulled in 200 yards upstream to fish a pocket on the far side of a bend. He had floated the river earlier that week and said the timing was perfect; water levels were low, the fishing for summer-fat rainbows the best he’d ever seen. Meanwhile, Pat had beached his raft near an eddy a good, hard shout above me and was casting now, framed by the mountains and hillsides of the 12-mile-long valley that stretches from Cooper Landing to Skilak Lake.

I checked my rig, a single hook topped with a salmon-egg-size bead Danny had given me, then glanced at the water. The tail-out was swifter than I had expected, so I crimped a couple of split-shots onto my tippet and started stripping out line.

The morning had gotten off to a traumatic start, the kind that makes a guy want to step back and reexamine his priorities; no one had said anything, but I suspect that’s partly why the three of us chose to spread out for a while and fish separately. We all needed a little space. Not to make too much of it — things could have gone far worse — but the event that had nearly canceled our trip could just as easily have ended our lives.

Prior to the crash, we had been traveling a good 55 mph over wet pavement. You could hear the tires hissing, kicking up water as we’d hurtled down a steep grade, the pickup shuddering through the early morning darkness like a train busting through a tunnel.

Fog and rain had smothered the high beams, rendering them worthless beyond 30 feet or so — ugly conditions, though not unusual for fall in Southcentral Alaska. Besides, it was Pat’s truck and he was driving, so any immediate problems navigating were pretty much in his hands. I was riding shotgun and Danny, a longtime Anchorage bar owner whose knack for finding and sticking husky rainbows is well known in local fishing circles, sat behind us in the extended cab explaining our plan for the day. 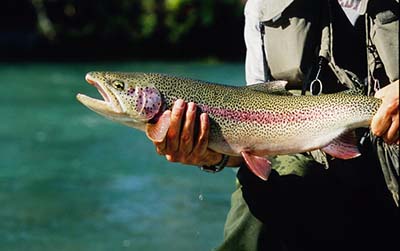 A rainbow in hand, before release. Photo courtesy Ken Marsh.

That’s when the moose stepped onto the road. One moment the headlights were lost in empty murk, the next they lit up a 7-foot-tall, green-eyed bull straddling the centerline directly in our path.

I’m still amazed we dodged the moose. The impact at that speed would have been violent, murderous. But Pat locked up the brakes and yanked the steering wheel. The truck veered sharply and the animal vanished as the trailer loaded with our rafts jackknifed, launching us into a 360-degree spin. Then came the sounds of squealing tires and shattering glass as the truck pitched backwards into the ditch and rolled, coming to rest on its side.

And there we’d been. Not yet outside the Anchorage city limits, our day apparently over before it had begun.

Now on the river, trying to put the scene behind me, I crouched slightly, tuning in to a wrinkle in the current where my first drift had drawn a suspicious pluck. Through the graphite rod I could feel the split-shots ticking lightly along the bottom. My arm was tight, cocked like a spring.

On the river’s far side the mountains reared abruptly, the aspens, cottonwoods and berry shrubs of the Kenai Mountains foothills forming a palette of vibrant yellows and reds. The high crags, sharp and ragged as pikes’ teeth, were dusted with snow. A few minutes earlier, the sun had broken through, a welcome departure from the gloom and dampness of early morning. Local weather systems — brewed by the alchemy of sunlight and air currents blowing off the peaks, ice fields and saltwater fiords to the east — keep the skies here in constant motion.

Through the center of it all, the river flowed, a striking blue-green ribbon tinted by glaciers and enriched by eons of salmon spawning, dying, and rotting away. Rainbows better than 10 pounds hold in that current, along with fiery-bellied Dolly Varden to 8 pounds or more.

Fall is the best time to catch them. The shorter days and darker nights, an edge in the air that promises snow and ice and hungrier times, drive the fish to fatten up. They grow ravenous, insatiable as we who pursue them, and it occurred to me there at the river’s edge, a fresh breeze kicking up and the mountains around me beaming in sunlight, that in a perfect world, September in Southcentral Alaska would last forever. 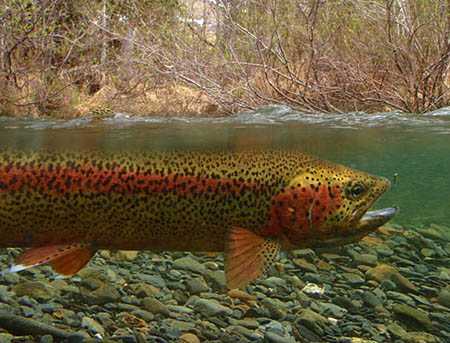 Shane Herzog photograped this rainbow in its own environment.

Briefly that morning, after the truck had come to a rest on its side, there had been silence. I’d hung in the darkness from my seat belt, dangling perhaps four feet above Pat. Then from the back seat Danny had called out, asking if everyone was OK. We were. The cab fell silent again as visions of that blue-green river and its thick-shouldered rainbow trout began to fade.

Suddenly, Pat, lying on his side against the driver’s door, had pounded his fist against the steering wheel and cursed. Danny and I kept a respectful silence; the truck, after all, was brand new — only three weeks old.

Then Pat had apologized for the accident, completely unwarranted considering that four-legged, 1,000-pound obstacles are not unusual on Southcentral Alaska roads. He blamed himself, uttering something about screwing up the fishing trip — when in fact his quick actions may well have saved our lives — and I realized then that Pat wasn’t thinking so much about the truck. Not on a September day with the air cool and the river running low and full of good, peppery fish.

Back on the water my second drift brought nothing, making me wonder if that first bump had been my imagination. Pitting the resistance of the current against the backbone of my rod, I pulled the line from the river and plopped it into the head of the eddy. In a second or two the split-shots were skittering across the bottom and again I crouched, settling into the drift.

It was clear, after we had climbed out of the pickup that morning that the truck was badly damaged. Yet, incredibly, the trailer with our one-man pontoon rafts was fine. A passerby called the police who arrived with flashing lights just as dawn was breaking. A tow truck showed up later and, as we stood around with our hands in our pockets, Danny reminded us that his house was only a 5-minute drive up the road. No one responded, so Danny continued, saying in essence that we could go home defeated, or he could catch a ride, get his truck, hitch up the trailer. ...

I can’t recall now what made me set the hook. I may have sensed a hesitation in the drift, or perhaps there was a slight tug — something subtle. In any case, I lifted my rod tip sharply and watched my floating line rip audibly out of the current. Instantly, my drag started buzzing and my forearm tensed as the fish tore for the center of the river. I glanced upstream to see if anyone was watching and saw Pat looking back. 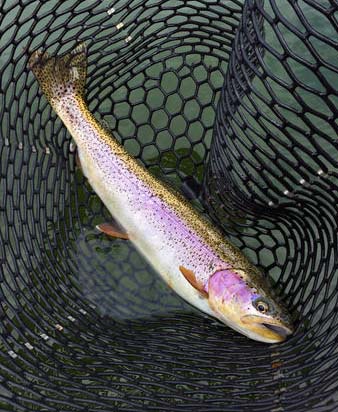 In the net before release. Photo by Ken Marsh.

Even before the fish jumped I knew it was a rainbow. Trout own an unmistakable zip, a certain power and speed matched rarely, if ever, by Dollys. The trout leapt once, twice, maybe six or seven times in all, splashing down hard before racing downstream and peeling off more line.

I held on as best I could, keeping tension on the fish, feeling its strength against the current. Along the way my heart pounded, drowning out the sounds of the wind and the river, and for just a moment the universe seemed to spin and the colors on the mountainsides appeared suddenly more vivid. This is the “rush” that anglers speak of, a sensation known to wreck marriages and careers and send the worst of us wading around the world for another — just one more — sweet fix.

Eventually, of course, the fish wore down and the ride was over. I led the trout, a chunky, silver-sided sprite of perhaps 4 or 5 pounds, into the shallows. The hook slipped easily from its jaw and I held it for a heartbeat or two before letting it vanish into the sunlight that dappled the river’s edge.

Pat, Danny and I would all catch larger fish — some much larger — before evening fell and darkness ran us off the water, though weights and measures were really beside the point. I looked upriver and saw Pat was casting again, pushing aside images of the accident to focus instead on the water, the fish, and the final moments of a season that passes by far too quickly.

High above us the snowy peaks were tucked behind a fresh wave of clouds. One day soon it would all be over; that snow would haul ass down the mountainsides, the river would lock up with ice. Winter here is inevitable, part of the heartbreak of being an Alaska fly-fisher. But anglers here are a dedicated bunch, driven to keep on swinging until the cold, bitter end. Something as trifling as a tumble in a truck won’t turn us back, not as long as the river flows freely and those fish, God bless ’em, keep feeding.