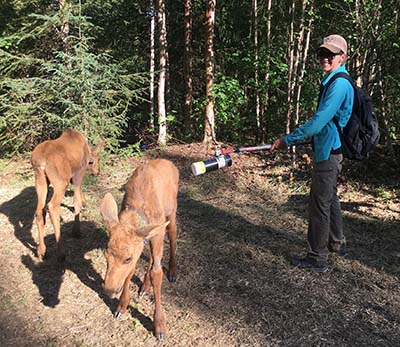 Bridgett Downs Benedict with the insect aspirator, vacuuming insects off a moose calf.

This summer, Bridgett Downs Benedict lived with moose and their insect hordes at the Kenai Moose Research Center near Sterling. A Ph.D. student from Texas A&M University, she’s learning about the insects that harass moose and how moose cope.

One aspect of moose behavior is particularly interesting.

She’s also looking at their effects. The recurrent insect bites develop into open wounds on the moose’s lower hind legs. In colder climates, such as Alaska, the risk of catching diseases from insect bites is low, however, understanding how the immune system responds is poorly understood in moose. 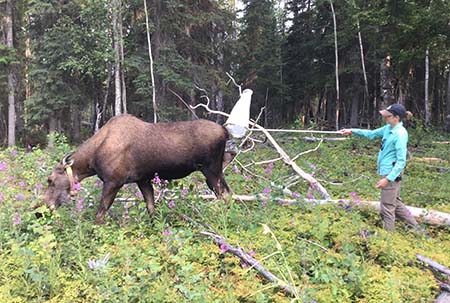 Sometimes her work involves sitting in the shade observing moose, or following moose as they move through the forest. She’s working closely with some friendly calves-of-the-year, and said they are good company. The insects are another story. She’s following moose with a long-handled net, netting the pesky parasites as they swarm around the rear-end of their victims. She’s also trapping insects, which requires attracting them.

“On the worst days I wear long sleeves, long pants, a hat, a head net, and bug spray as I walk around with insect attractant,” she said.

This is the first summer of a three or four-year project, and Benedict is setting the stage for future work. That includes training five moose calves, grooming them to be cooperative and tractable subjects. Benedict has trained horses and grew up showing and riding quarter horses. She said it’s interesting to compare the similarities and differences between the animals.

This project is part of a long history of moose science at the Kenai Moose Research Center (KMRC). The Alaska Department of Fish and Game facility has been in operation since the late 1960s and is tucked into the rolling hill and lake country of the northwestern Kenai Peninsula. An hour drive down gravel roads from Sterling, the center is home to more than a dozen tame, captive moose. Sixteen miles of tall fencing encloses four tracts, each a square-mile, with a landscape of trees, meadows and small lakes. 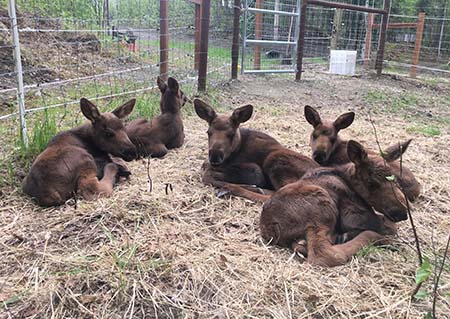 Moose calves of the year at the Kenai Moose Research Center.

Over the years, researchers from Norway, Sweden, Russia, Canada and the Lower 48 have worked on projects at the center. Many of the studies are long term, because scientists can work with the same animals for years, an opportunity rarely available in the wild. More than 150 scientific papers based on research at the center have been published.

It's tough for a biologist to dog the heels of a foraging wild moose to watch exactly how it eats, or to closely monitor the pregnancy of a cow moose. But tame moose don't object to human company. By bottle raising moose and conditioning them to human contact, biologists at KMRC have cultivated (mostly) cooperative subjects.

Benedict has found the level of cooperation varies from day to day. “Host sampling” involves netting insects that are swarming around the moose, sweeping the air with a long-handled net. Moose flies (a specific type of insect) in particular target the hocks and back legs.

“You need to be careful around the back legs of moose,” Benedict said. “Moose definitely have a personality, and they are different from day to day. It might be hot one day, and they will be, ‘No, you can’t come near me today and sample insects.’ They might tolerate me or take off running.” 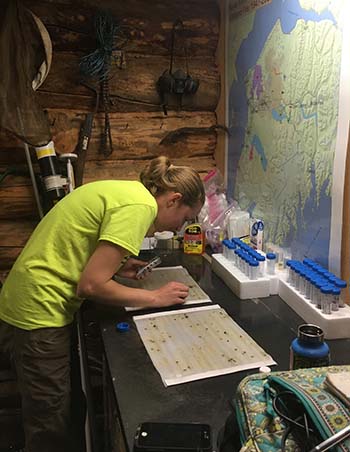 She said the calves are more agreeable to netting.

“They don't mind netting at all,” she said. “The adults put up with it, but calves seem to enjoy it. I’m hoping that stays with them and they remain tolerant. I'm also introducing them to an insect aspirator, a vacuum. It’s designed to vacuum spiders out of the corners of a room. I'm using it to vacuum insects off the moose. The adults don’t like it, it's loud, but calves will tolerate it.”

Turning on the vacuum during feeding (bottled milk) helped develop tolerance, as well as treats like bananas.

Benedict said calves tend to fare better with the insect hordes than the adults. Their coat, furrier and fuzzier than the adult hair, resists insects better, and they don’t get open sores like the adults.

“They still get bit, especially on their noses and ears, but the young calf coat definitely helps,” she said.

Benedict is doing on-host sampling with the calves and adult moose. While netting to see what insects are around them, she also records climatic variables such as temperature, time of day, and relative humidity. She swabs their mouths for saliva and looks at levels of salivary cortisol. 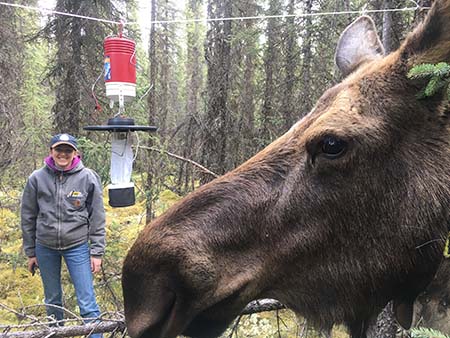 Bridgett Downs Benedict next to an insect trap.

“That’s a way to measure the level of stress,” she said.

“It’s interesting, the moose seem to hang out in the black spruce habitat, and they lay down in the shade,” she said. “The insects can really get on them when they’re lying down, and they can’t reach their back legs.”

Benedict is trapping insects in different habitat types at KMRC. She uses several different types of traps for “off host sampling,” sticky traps, and a trap for smaller insects like mosquitoes that uses a fan. UV light attracts the insects and the fan blows them into the trap. She also uses dry ice, which emits CO2. “It attracts them like an animal breathing,” she said.

Benedict will be back in Texas for autumn, and the cooler weather will dramatically change the insect harassment situation for the moose. Next summer, the calves will be yearlings, considerably larger, and hopefully still amenable to having insects vacuumed off their bodies.