Meet the Beetles
Getting the Perfect Skull 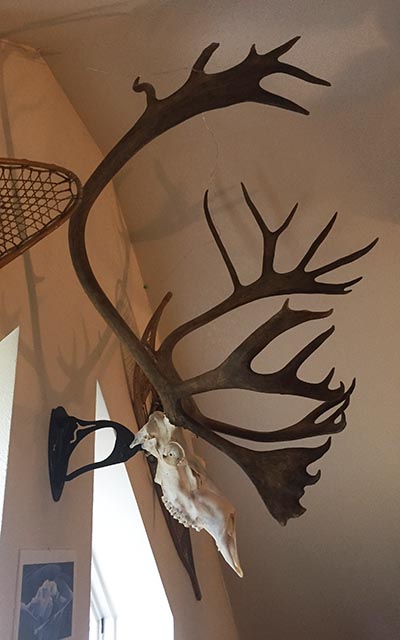 Kids are fascinated by skulls. The gleaming teeth and empty eye sockets offer intriguing clues to the skull’s once-living owner. Hunters often choose to display a skull rather than a head-and-shoulder taxidermy mount, the “European mount” serving to memorialize a hunting experience. A full-body articulated skeleton is an amazing thing to behold, whether it’s a human skeleton in a health class or a slinky cat skeleton in biology class.

For folks willing to handle a deceased critter, getting that clean, porcelain-white skull is straightforward. You cut off as much meat as possible, simmer it in a pot of hot water for several days, and keep trimming, scraping, scooping, soaking, flushing, and cutting until it is clean. A bath in hydrogen peroxide (and/or a detergent of choice) wraps up the process.

The downside is that the teeth tend to fall out and maybe get lost, and it’s possible to damage a skull with all that handling, soaking and heating. It’s a fair amount of work, depending on the size of the animal. The state of decay is a significant factor as well; it’s the same job, but far more unpleasant when it is not fresh.

Fish and Game wildlife biologist Heidi Hatcher cleaned animal skulls in college, using the soak and scrape method. Now she’s the Glennallen Area biologist, and a few years ago, as the assistant area biologist, she was looking at cleaning two large skulls. She considered getting some helpers – a few hundred little helpers who would work for food.

“In the fall of 2015 I was tasked with cleaning a Dall sheep skull here for the office, and that same year I got a pretty nice caribou,” she said. “I thought rather than boiling it and all that, and with the cost of getting a European mount, for $50 I could get a colony and be way ahead.” 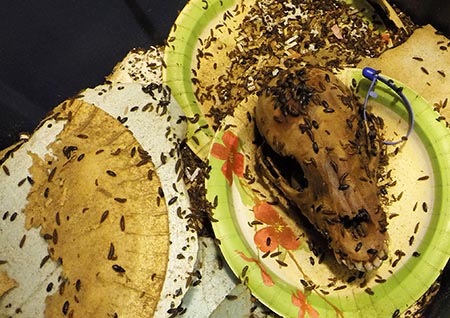 Beetles and larvae at work on a bear skull.

She said the dermestid beetles arrived in a package about the size of a Cool-Whip container, three- to five-hundred insects in all life stages.

“I had to grow them, get the colony bigger so they could clean skulls, and it didn’t take long,” she said. “They did a great job on the sheep and the caribou.”

Like all insects, the beetles go through several stages of development. Adults lay eggs which hatch into tiny larvae in about four days. “They look almost like little caterpillars, and they are the ones that do most of the actual eating. When they hatch you can barely see them. They grow to be about an inch long.”

She keeps Styrofoam blocks in the Rubbermaid totes with the beetles. The larvae burrow into the blocks when they are about an inch long, and in about a week they metamorphose into adult beetles. “The adults do some eating, not quite as much as the larvae, and they lay eggs. They like to lay eggs on bones, so I leave clean bones in there for them.”

The larvae go through seven-to-nine molts over about six weeks, before burrowing in and emerging as adult beetles. The adults live about two months, so the total lifespan is four to five months.

Hatcher divided the beetles into two colonies, and she guesses they both now include thousands of insects. She keeps them in an old upright freezer with the compressor removed, a larger colony on the bottom and a smaller one on a shelf above. A fan vents to outside, on a timer, and comes on every hour or so. It’s important to keep other bugs from invading the colony, so she screens the vents. Depending on what gets in, she said outside insects could take over, become a nuisance, or possibly destroy the colony. 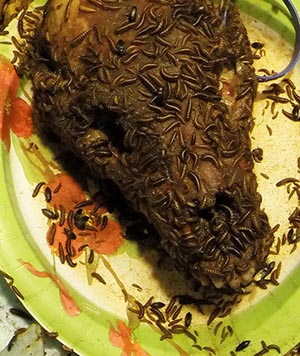 A close up of the bear skull with adult beetles and the larvae - which do most of the cleaning. The colony has beetles in all life stages. Under good conditions, they can clean a skull like this in a week.

“Now it’s completely self-perpetuating, the whole system, I just have to keep them watered and fed, and at the right temperature and humidity,” she said.

A colony can clean a skull pretty fast, depending on the condition of the skull, the size, and the mood of the beetles. She preps the skulls to speed up the process, removing the eyes and brain and cutting off much of the meat.

“It depends a lot on how the colony is feeling at the moment, whether they are really hungry, and where they are at in their life stages,” Hatcher said. “If they are really raring to go, I can do a bear skull in a week. It depends on the skull, I have this bison skull that’s really dried out, and I have to keep taking it out and soaking it in water, then they are able to make more headway on it when I put it back it.”

After the beetles finish their work, Hatcher follows up with a soak in hydrogen peroxide, which sanitizes and degreases the skull. A couple of days to a week does the trick.

“If you left it in a stronger solution for longer time, it could start to dissolve, but the three-percent over the counter peroxide is fine. If it’s really greasy I’ll also use Dawn detergent.”

Hatcher cleans skulls for other people, and for her own personal skull collection. She grew up in North Carolina and her dad launched her collection with the gift of a five-inch-long turtle skull. 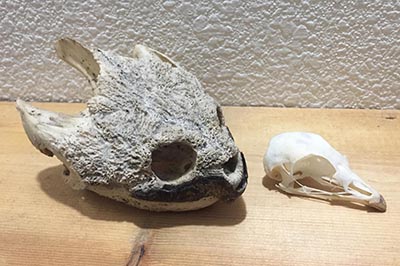 A snapping turtle skull found in the woods, and a grouse skull, cleaned by the beetle colony in a single day.

“I’ve collected skulls since I was a little kid,” she said. “My dad is a retired game warden, and when I was little he’d bring home things he found in the woods, and that’s what got me started. I still have my first one, a snapping turtle skull.”

Her current projects include several whole skeletons, a caribou calf skeleton and a wolf skeleton, for a Bureau of Land Management archeologist. “She’s also having me clean bones so she can compare the fresh bones to ones they find in archeological digs.”

Hatcher said she got a taxidermy license so she can charge people for work. Trappers provide skulls, and people will trade something they want cleaned for some other raw skulls. She said lately she’s been cleaning a lot of bison skulls, and has three in progress – along with the caribou calf skeleton and a lynx skull. Moose and caribou with large antlers are difficult because they don’t fit into the containers.

She said one of the fun things about cleaning skulls is that you discover things you wouldn’t see. She cleaned the skull of a young wolf that had a bunch of porcupine quills stuck up in the nasal turbinates, the soft tissue on the walls of the nasal cavity. “There was another young wolf, probably from that same pack, and it had a congenital hole in the top of its skull. The skull was fully formed, and it wasn’t between the sutures. It wasn’t a gunshot, a birth defect I guess.”

There is an online market for skulls, and she also sells skulls at craft fairs. Those clean, gleaming skulls on a table are kid magnets. “Kids are fascinated,” she said. “They’ll just stare at the skulls and ask a lot of questions.”