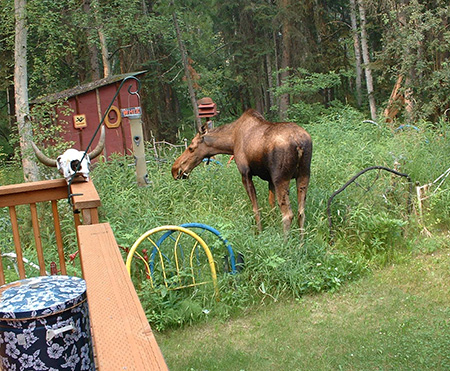 A visiting moose provides an Interior Alaska homeowner a close up look at a common moose parasite. Photo by Pam Bruce.

A concerned Alaskan contacted a Fish and Game biologist in mid-July regarding a weird-looking moose. This cow moose and her twin calves-of-the-year were hanging around the woman’s yard outside Fairbanks.

“They napped on a wet spot next to my lawn then got hungry,” she wrote. “As I chased them away from some of my shrubs I noticed that the cow's back legs were in horrible condition. When I first saw it I thought that maybe someone had shot at her with a shotgun... The calves are both very healthy. The cow is fine too except for her back legs. Any information would be welcome.”

Wildlife biologist Tom Seaton responded. The animal had a moose fly infection. The inflamed bumps peppering the animal’s hocks were insect bites. Seaton explained that they are common, but they don’t happen to every moose every year. It’s a summer phenomenon, peaking in July and usually clearing up by September. Some years are worse than others.

Dr. Kimberlee Beckmen, a veterinarian with Fish and Game, said a moose with a moose fly infection is reported by at least one member of the public every year.

“It’s usually the worst in July, so that’s when people see it. I’ve already had one or two reports this year,” she said. “It’s not there in the fall when people are hunting; but the general public might see it in summer and be concerned.”

Because of frequent questions from wildlife viewers who see wildlife with parasites or diseases, and especially from hunters who see weird things when field dressing game animals, Fish and Game has produced guides to common diseases and parasites. Links are provided at the end of this article. Biologists are monitoring parasites in Alaska and are interested in reports – particularly ticks, and parasites that show up in areas where they have not been seen before. 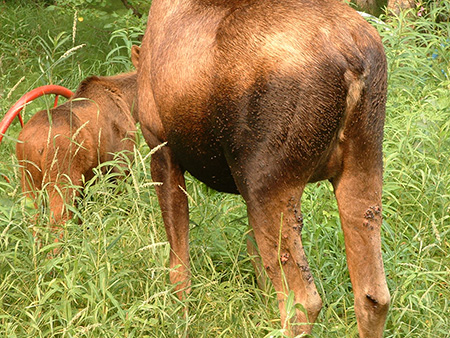 The cow moose and one of her calves. Moose can't reach their back legs to shoo the flies away - a series of bites and sores can be sen halfway down the back of the moose's hind legs.

Beckmen explained that the moose fly is an obligate parasite of moose, meaning it has to spend the entire life cycle on the moose. Like the mosquito, the females suck blood in summer for nutrition needed to lay eggs. When the moose gets up in the morning and poops, the flies jump off and lay their eggs on the feces and then get back on the moose. The eggs hatch on the feces and then the grubs pupate, and overwinter as pupae. The adult flies die in the fall.

The moose fly transmits other parasites to moose in the process of biting and feeding, parasitic worms like legworm under the skin and Setaria, a free-floating worm in the abdomen, that hunters sometimes see when field dressing moose.

As a veterinarian working with wildlife, Dr. Beckmen has had personal encounters with moose flies.

“Supposedly moose flies won’t bite other animals, but I have been bitten by them and it hurts,” she said. “But I’m back there getting samples. They bite like horseflies, they’re in the same group as deerflies and horseflies. It’s bothersome to the moose, it doesn’t kill them, although the other parasites they carry can be serious. The moose kick and twitch, trying to get rid of them. It makes moose sensitive around their rear legs - moose are sensitive about about their back legs, even tame research moose.”

Both Seaton and Beckmen pointed out that other ungulates have their own bothersome hangers-on, like the warble flies and nasal bot flies that bedevil caribou in summer. 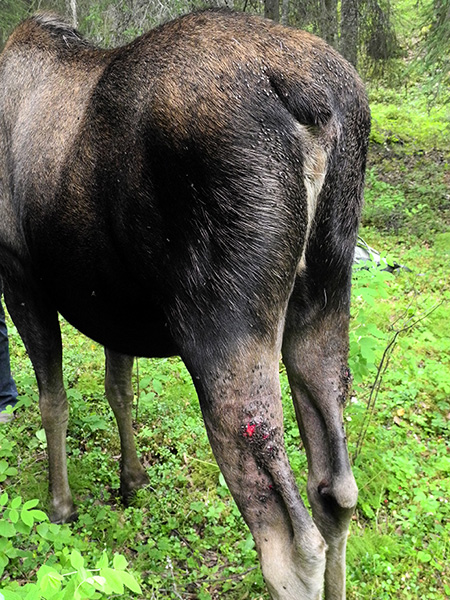 The moose fly bites heal up by autumn. Hunters might notice scars on the moose’s back legs but they’re subtle, and don’t affect the meat.

Beckmen said reports of moose flies are typical from Southcentral and Interior Alaska, but unusual elsewhere, especially from Arctic and sub-Arctic regions.

“In the past few years I’ve gotten reports of these from the Northwest, Nome, and this is new for them,” she said. “This may be an example of a parasite that is able to increase its geographic distribution because of climate change. We’d like reports of these insects being seen in areas where they have not been seen before.”

Questions or reports can be emailed to the DWC Wildlife Health and Disease Surveillance program directly at dfg.dwc.vet@alaska.gov

What is this thing in my game meat?