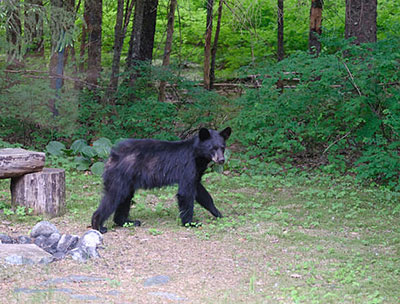 A yearling bear in Juneau. In late June, mother black bears tend to "run off" yearling (about 18 month-old) cubs, prior to mating. These yearlings may be especially curious and quick to investigate human food sources. Keep all bear attractants out of reach. Photo by Jennelle Jenniges.

It’s important to be safe around wildlife all year long, but spring is a particularly important time.

A big reason is baby animals. Birds are protective of nestlings, and mammals (especially moose and bears) can be defensive and unpredictable when they have vulnerable youngsters.

The other big reason is bears and attractants – and bears in town. In Alaska, most bears emerge from hibernation in April. Spring is the time to be especially vigilant about keeping bears out of trash. A bear rewarded with a food source will return and likely become a persistent problem for the whole neighborhood. Bears are creatures of habit. If they show up and food isn’t there, they’ll move on. And they’ll move on to easier sources of food.

We’ll start with some of the less-well-known wildlife safety issues, and move on to the more familiar ones.

Many gulls and terns nest on the ground, often in colonies, and can be defensive in nesting season. If birds are screaming and dive bombing you, leave the area. Gulls can make contact and it can hurt. Ground nesting waterfowl will defend nests, and geese can be quite aggressive.

Getting chewed out by a Steller jay is not a big deal, but defensive raptors have hurt people. Sharp-shinned hawks, relatively small birds of prey, will dive on people near a nest, but goshawks are the one to avoid.

Goshawks live in forested areas of Alaska. They can be quite aggressive in the spring and early summer if you approach their nest area, and they have attacked people. Generally the female’s shrill call – a “kakking” vocal outburst – will precede a dive-bombing attack. Males will protect the nest area as well, but females can be so aggressive they’ve been known to attack their own mates. A male goshawk provisioning his mate may leave food nearby rather than approach the nest. If a goshawk is squawking repetitively, leave the area. A goshawk will swoop down and strike a person in the head with its talons when sufficiently agitated. 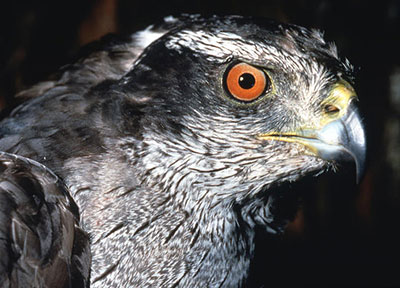 Bald eagles have become aggressive toward people, but it’s not typical behavior. Eagles that have been fed, or become habituated to human activities, trash, fish and other food sources, have behaved aggressively and hurt people. Eagles may also behave defensively around a nest. Give the big raptors space.

Beavers rarely hurt people, but it has happened. In 2013 a sport fisherman in Belarus was killed when he grabbed a beaver in an attempt to take a selfie with the uncooperative animal. The beaver bit him in the thigh and opened an artery, and he bled to death.

The best advice is common sense: give animals space. Wild animals do not want to be approached, crowded or pursued. That includes controlling pets. Juneau naturalist Bob Armstrong is aware of several unfortunate beaver and dog encounters. 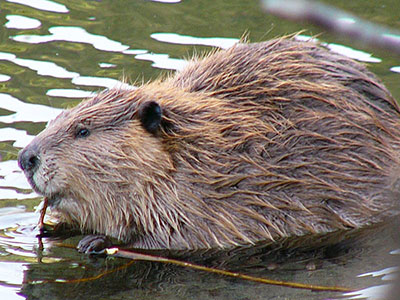 Beavers can be shy and nocturnal, or active by day and fairly indifferent to people. Beavers can be defensive when approached by dogs, especially in the water, where they are quite agile. Control dogs outdoors, and always give wild animals plenty of space. Photo by Frank Zmuda.

In Anchorage, a favorite off-leash dog park includes a beaver pond. A woman who often walks her dogs in the park had a surprising encounter when one of her dogs swam near a beaver. The beaver reacted defensively and bit the dog, almost puncturing a lung. The dog survived, but it is a good reminder to watch for wildlife even in areas that you frequent.

When you look at a porcupine, it is easy to get the message that you need to keep your distance. Their sharp, barbed quills are as dangerous as they look, and while they cannot shoot them, they can still ruin your day.

Porcupine quills are unlikely to cause anything more than scarring to a human but can create a more serious situation for a pet. Dogs often explore the world with their mouths and can easily end up with a mouthful of quills. Dogs that get quilled can end up in shock or with an infection if the quills are not removed promptly. If your dog is quilled, seek veterinary help.

To prevent a prickly encounter, keep your dog on a leash and give wildlife plenty of space. Even gentle herbivores like porcupines can put up a fight when they need to defend themselves.

Bears in towns and afield

To help prevent bear problems around homes or neighborhoods, it is important to minimize things that attract bears: 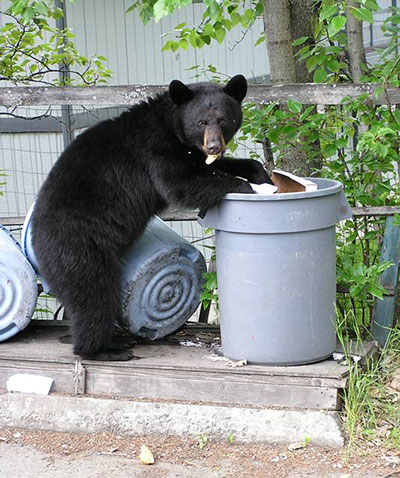 An urban black bear with an inappropriate food source. Photo by Rick Sinnott.

Garbage - Store trash inside buildings or in bear-proof containers; keep secured until the day of scheduled pickup. Encourage neighbors to do the same. Freeze smelly food and put it in the trash right before it is picked up.

Bird Feeders – Take feeders down April through October, store out of bears’ reach and remove spilled seed. There is plenty of wild food available for birds in spring and summer, and bird feeders really do attract bears.

Other attractants include barbecues, pet food and freezers - Clean barbecue grills, especially grease traps, after each use. The same goes for fish smokers later in the summer. Feed pets indoors or clean up excess and spilled food between meals. Store pet food, livestock food, and birdseed indoors or in bear-resistant containers. Keep freezers locked in a secure building or otherwise out of bears’ reach.

Electric fences – Properly constructed electric fences can keep bears out of gardens, compost, and away from buildings, chicken coops, and domestic animals. For more information, contact your local department office or visit the webpage at www.adfg.alaska.gov/index.cfm?adfg=livingwithbears.bearfences.

As a general rule, be careful at night outdoors. Make noise, turn on lights, and be careful that you don’t startle a bear that may be passing through the neighborhood or drawn to some attractant.

Spring has a couple of advantages regarding safety and bears in the outdoors. Better visibility and fewer fish. Bears do not like to be surprised. Visibility is better in the spring, until the vegetation and foliage has fully sprouted out, so it’s easier to see bears and for bears to see you. A few months on, in summer, salmon bring bears and people to the same places for the same reason – to noisy, brushy salmon streams and rivers where surprise encounters may be more likely. 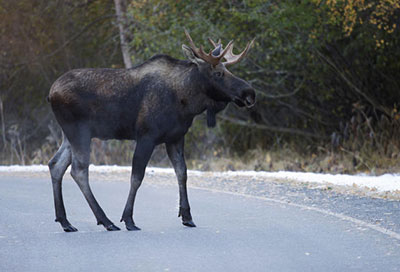 An urban moose in Anchorage. Mother moose can be quite protective of young in the spring. Photo by Ken Marsh

The basic rules for traveling in bear country apply in spring. Make noise: talking, clapping, and singing, will let bears know humans are about. Stay alert: be aware of sign like tracks and scat on the trail, and don’t wear earbuds or headphones. Carry a deterrent like bear spray and have it readily accessible. Make sure to practice so you know how to use it. Keep dogs under control.

Moose are perhaps some of the most underestimated animals in Alaska. They are a common-place institution, and it is easy to become complacent around the comical-looking herbivore. Unlike bears, moose are around year-round, and their behaviors can be erratic.

A moose that is defensive may have its ears back, hackles up, and be making vocalizations. Give moose a wide berth, and if one charges you--run away and try to take cover behind a tree or other large object.

More on living with moose

More on electric fences for bears, living with bears, and bear safety

What you should know about bear spray