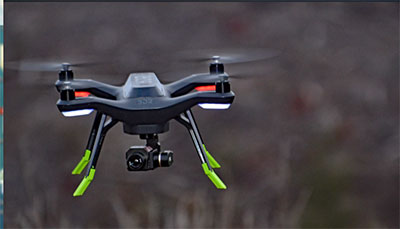 Drones, also known as Unmanned Aircraft Systems (UAS) are very often equipped with cameras like the one pictured that record video and transmit an aerial view from the aircraft's perspective. The Alaska Board of Game agreed that this provides done-equipped hunters an unfair advantage.

I will be coming up to Homer Alaska at the end of May to film a bear hunt and some fishing. We are currently working with the state to get the proper permits. I've just got a few questions about the use of drones. We are planning to have a small drone to capture some b-roll of hunting/fishing/landscapes. What are the restrictions for use when hunting or fishing? We just want to make sure we are doing everything by the book. Any help you could give would be fantastic.

I explained that In Alaska, it is illegal to use drones while hunting – a drone can’t be used to locate game animals. I also checked with the state wildlife troopers, who enforce Alaska’s wildlife regulations.

Trooper Jeremy Baum, posted in Anchor Point near Homer, said, “Drones can’t be used in any portion of a hunt until after the bear is killed and taken from the field.”

He added that a drone can’t be used purposely or incidentally in the process of taking game. After the hunt the individuals can go back into the field with the drone, but that’s not a hunt, it’s a photography trip. Even scouting an area to hunt for bears using a drone is illegal.

Captain Rex Leath elaborated; adding that a hunter can’t use a drone to locate an animal even after it has been shot (“take has occurred”), until after it is found by the hunter.

He wrote: “If someone is moose hunting and they shoot a moose, once that moose is dead and located, they can use a drone if they are done hunting. The dynamic can get confusing if there are other people in the group still hunting. If others in the group are still hunting, they cannot communicate what is seen with the drone’s camera by way of wildlife or they will be in violation." 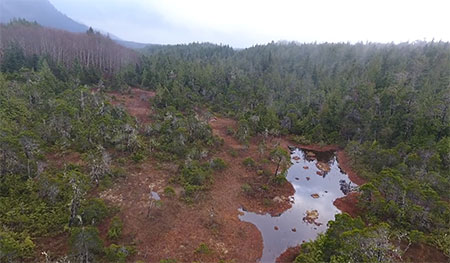 Drones offer a bird's-eye-view are not legal for scouting game in Alaska.

Early in this decade, Alaska Wildlife Troopers became aware that unmanned aircraft were being used to spot and assist in taking big game. To remedy this, they approached the Board of Game. In Alaska, anyone can propose a change to hunting regulations via a Board of Game proposal. At the statewide meeting in 2014, Proposal 180 addressed the use of aerial drones and remote controlled camera equipment, noting that: “Some of these remote controlled aircraft can operate up to several hundred feet above the ground, giving the hunter an unfair advantage and potentially causing a direct conservation concern for the resource.”

The board passed the proposal, and the current regulations state that “You may not take game by…using…any device that has been airborne, remotely controlled, or communicates wirelessly, and used to spot or locate game with the use of a camera or video device…”

“Take” is not simply harvesting an animal. According to Alaska Statutes (AS 16.05.940(35) “take” means taking, pursuing, hunting, fishing, trapping, or in any manner disturbing, capturing, or killing or attempting to take, pursue, hunt, fish, trap, or in any manner capture or kill fish or game.

In 2014 the National Park Service prohibited the use of drones in all national parks. Wilderness areas and congressionally designated primitive areas are also off limits, as drones are considered to be both “motorized equipment” and “mechanical transport.” 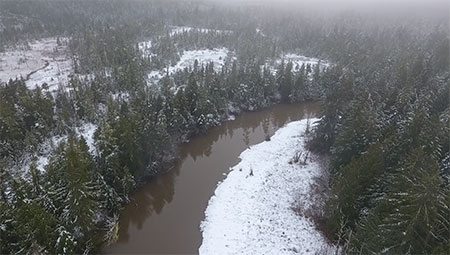 A drone's perspective of a river and riverbank. Drones are prohibited in national parks and many national wildlife refuges.

Others don’t specifically prohibit drones, but they do apply the Code of Federal Regulations regarding use of aircraft (Title 50 CFR 27.34). The section states: “The unauthorized operation of aircraft, including sail planes, and hang gliders, at altitudes resulting in harassment of wildlife, or the unauthorized landing or take-off on a national wildlife refuge, except in an emergency, is prohibited.”

Tracy Fischbach is a natural resource planner with the USFWS, based in Anchorage. She said each refuge in the system is set aside with a legal purpose, and those purposes drive what can and cannot be allowed on a specific refuge.

“Refuges are set aside for wildlife conservation,” she said. “So you’ll see more restrictive use of wildlife refuges, especially in the Lower 48, to insure that.”

Two of the primary concerns with drones are the potential to harass wildlife, and conflicts with other refuge users. In some cases, use of a drone may be allowed with a special use permit – that’s the “authorization” aspect. That involves working with the refuge manager and a permit specialist.

“Permits depend on what you are doing and why, and when and where,” Fischbach said. “If someone is doing a commercial film about the refuge and they want aerial footage, we have done permits to allow that. A film that doesn’t have anything to do with the refuge, someone just want pretty landscape footage, that’s probably not going to work.”

Drone advice from the US Forest Service.