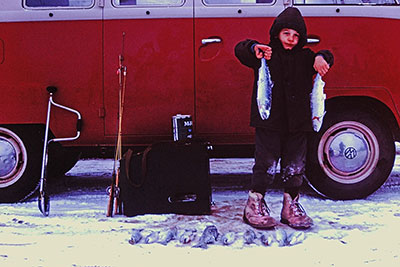 Probably cold and tired, five-year-old Clark Fair poses with some of the fish caught by him and his father on Scout Lake in 1963.

One day, while shivering over a hole in the ice on windy lower Aleknagik Lake, I recalled that when I was very young, my father had been so eager to share his love for ice-fishing that he was willing to make me miserable in order to help me enjoy the experience.

Technically, Dad didn’t intend to make me miserable, but he was prepared to allow a modicum of suffering if it meant he could fish a little longer.

My father was not an angling ogre. My suffering usually resulted from three factors: (1) I was rarely dressed adequately for the conditions, especially when such exposure lasted several hours. Red rubber boots, even those lined with lamb’s wool, and tiny mittens enclosed in plastic shells, provide poor insulation from the cold emanating from frozen lakes and frigid winter air. (2) Admitting that I could no longer feel my hands and feet was tantamount to whining. (3) Because whining interfered with fishing, whining was not appreciated.

So beneath my flimsy coverings, my dainty digits iced up.

This is not to say that I didn’t enjoy ice-fishing. I did, and I still do. But benumbed, grossly whitened fingers and toes hampered my ability to fully revel in the experience. Consequently, although I began each adventure with enthusiasm, I often concluded it in despair.

Dad was typically apologetic, after the fact. Once we had trudged back to the car and he had removed my boots and mittens to reveal something like Raynaud’s syndrome, he’d become almost remorseful. “Why didn’t you tell me it was this bad?” 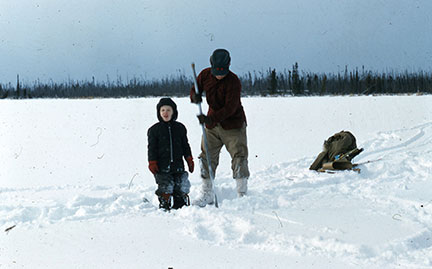 This 1962 image is Clark Fair's earliest photo of him ice-fishing with his father, Calvin Fair. Clark had just turned four.

Translation: I was guilty of concealing the extent of my misery.

Then came the comforting: rubbing my ghastly extremities, cranking up the heat in the car, and jamming fresh wool socks over my feet and hands for insulation as I thawed. If I looked pitiful enough, or pushed out a quiet tear, he might even dig out a snack for me from his bulky fishing pack.

But I must admit: Despite the cold, Dad did instill in me a love for ice-fishing—at not quite the same intensity of his own mania, perhaps, but an affection nevertheless. And I did eventually toughen up. More importantly, I learned to dress myself … and more warmly.

The oldest photo I have of my father and me ice-fishing comes from March 1962, the month I turned four. Dad is pounding at the lake surface with a long-handled ice-chipper. It must have been fairly warm because, although his feet are encased in bunny boots, he has removed his thick jacket and is wearing only thin gloves as he hammers away. I, on the other hand, am wearing red mittens, a thick jacket, baggy insulated pants, and red rubber boots sheathed in what appear to be the felt liners from a pair of Sorels. I do not yet look miserable, so I surmise that we had only recently arrived and that Dad is creating our first fishing hole.

I have some fond memories of ice-fishing, particularly with my father and brother. I also enjoyed introducing my children to the activity, watching the sheer joy on their faces as they jerked gymnastic trout through a hole the circumference of a coffee can. The last time I ice-fished with them, we drove far out a snow-drifted road near Sterling, where on a sunny March afternoon both kids caught bigger fish than I did, and there was no hint of whining to be heard. 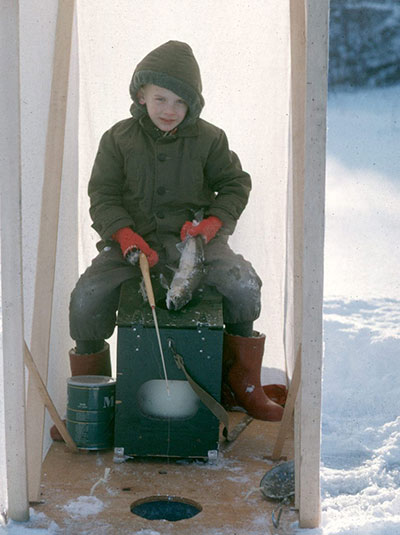 A nearly six-year-old Clark Fair shows off a landlocked silver salmon he caught while ice-fishing on Scout Lake, just north of Soldotna.

One of my first “dates” with my partner, Yvonne Leutwyler, also involved ice-fishing, as we dragged two large wet dogs and a sled full of gear through some very deep snow to a remote lake, returning (exhausted) with a mess of tasty rainbows and Dolly Varden to cook up with rice for dinner.

When we decided to move to Dillingham, I’d heard so much about the amazing fishing there that I was compelled to pack my winter fishing gear in addition to my rods and reels for unfrozen days. Then, once we arrived, I grew concerned that a lack of access to the best fishing spots might prevent me from wetting a line through the ice.

That problem was solved one January when we learned that huge schools of rainbow smelt had traveled out of Nushagak Bay and 20 miles up the Wood River to Aleknagik Lake, where they could be caught through an ice shelf covering part of the lake.

Rainbow smelt look somewhat different than the hooligan navigating the lower Kenai River each spring, but the taste is quite similar—delicious when dredged in flour, sprinkled with salt and pepper, and fried quickly and crisply in butter. So, although I am not fond of fishing on ice near open water, I decided to bury my fears and hope for the best. 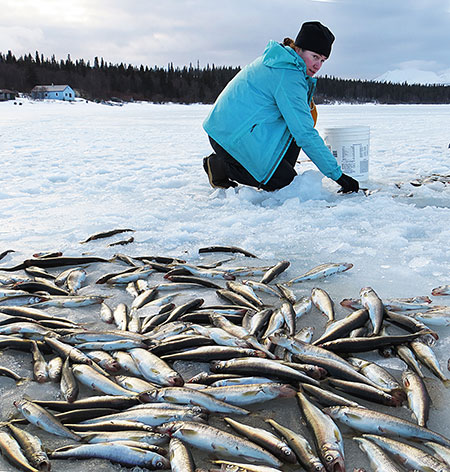 Yvonne Leutwyler begins to collect some of the rainbow smelt that she and the author pulled through the ice on Aleknagik Lake near Dillingham. Clark Fair photo.

At the end of Aleknagik Lake Road, we met a local resident who pointed up the lake to the best place to fish and assured us that our recent spate of warm weather had left open a few holes created by previous anglers. We were pleased to hear this since we had no auger, no axe and no ice-chipper.

After a short drive, we found ourselves tromping through slush covering ice less than a foot thick and dotted with snowmobiles, fishermen, open holes, and scattered piles of fresh smelt. The water beneath the ice was about three feet deep and clear enough for us to see the bottom, the view of which was interrupted with great frequency by the darting, shadowy bodies of small fish.

Down a pair of available holes we dropped single egg-like beads pegged above small single hooks, accompanied by tiny lead weights to urge the bait to sink. Peering down the holes, we witnessed a feeding frenzy. Smelt attacked both bead and weight, and thus began our liberal removal of fish onto ice. 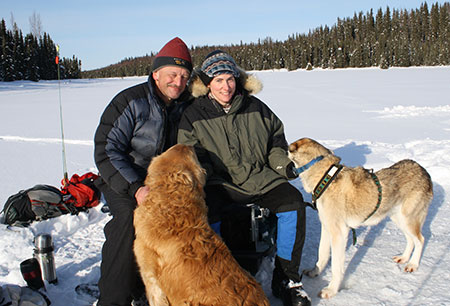 For Clark and Yvonne, one of their first dates involved ice-fishing. Here, their dogs join the photo op on a remote lake north of Soldotna, in 2012.

Although I’d like to say that Yvonne caught the most fish because I spent time taking photographs, that claim would be dishonest. The truth is, she out-fished me, at times extracting two or three smelt for each one I pulled from my hole. The majority of the butchered smelt we later jammed into our tiny freezer could be attributed primarily to her skillful smelt annihilation.

My father was similarly adept as a fish whisperer, seemingly able to draw trout through the ice of any lake, no matter how frustratingly barren was my own location only a few yards away. The Kenai Peninsula’s Dolly Varden Lake—if I were arguing my point at trial—would be Exhibit A. I have been skunked at that lake almost as many times as I have caught fish there, but it was one of Dad’s favorite close-by places to try our luck.

His luck was always good. Mine was often bad.

In order to go home early, I’d have whined about cold feet at Dolly Varden Lake, but by the time Dad and I began fishing there regularly, I was old enough to dress properly.

I was also experienced enough to know that whining made no difference.

Clark Fair, a lifelong Alaskan, grew up on a homestead in Soldotna, taught high school English for 20 years. He now lives in Homer, works part time for Kenai Peninsula College, and has been a freelance writer and photographer for the last decade.