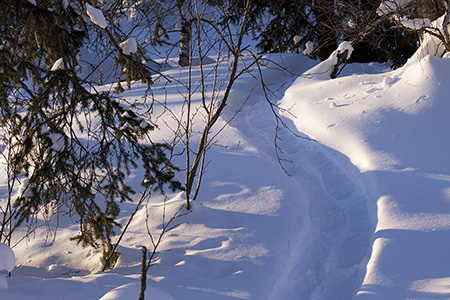 Thirty years ago, living as a trapper in Alaska’s upper Susitna Valley, I traveled on snowshoes nearly every winter day. Against a tapestry of muskegs, spruce forests and ice-covered lakes and streams, I hiked uncounted miles, starting daily before dawn and continuing through the bright hours into dusk.

At my cabin late in the evenings, worn from the winds, drifts and adventures of the day, I would kick off my snowshoes, knock the snow from my boots, and follow my headlamp beam into the darkness where the woodstove waited to be lit and fed. Dinner came next — maybe moose stew and biscuits, black bear roast with canned peas, or simply beans and salt pork with a hunk of crusty sourdough bread — then I would fall asleep to firelight dancing on the log walls, images of wild tracks, whirling snowflakes, and events of the day lingering in my dreams.

Eventually I traded wilderness living for a conventional urban routine, though my snowshoe days never really left me. The smell of spruce smoke on cold December mornings or the sight of sunlight falling like gold over snow-covered hills can stir familiar longings.

On its surface, winter in Alaska seems a silent season. The lawnmower clatter, fishing-trip frenzies, and late-night barbecues of summer are long gone, replaced by a welcome stillness. The sun burns briefly and dimly come November, hardly breaking the horizon by December. On the solstice, winter’s shortest day, Anchorage receives only 5 hours, 28 minutes of sunlight; farther north, subarctic Fairbanks receives 3 hours, 42 minutes; and well beyond the Arctic Circle, the sun that set in Barrow on November 18 won’t rise again until January 23.

Tempting this time of year to watch television or curl up with a book. Maybe take a nap.

But surrender is no option for outdoors-loving Alaskans. Outside, beyond the frozen forests and snow-covered mountains, life goes splendidly on. From November through the end of March, on any given winter day, we can be found outdoors, embracing life in a land as scenic and exhilarating as any place and any season on the planet. 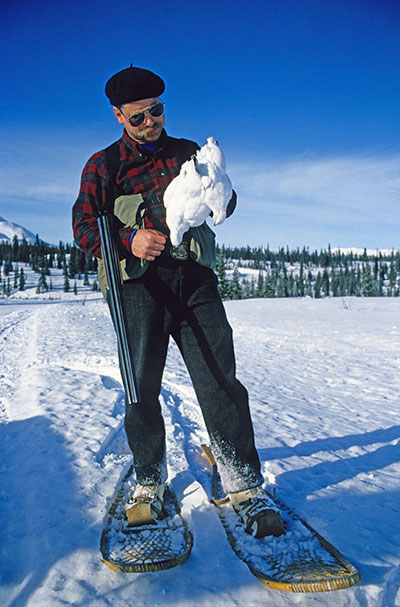 A hunter uses snowshoes to pursue ptarmigan in winter. Photo by Ken Marsh.

“The Wild still lingered in him and the wolf in him merely slept.”

Early last December, feeling out of shape and restless, I parked my truck near an undeveloped tract on the outskirts of Anchorage, stepped into a pair of snowshoes, and shuffled head-down into the silent woods. My course was random, the plan simple: I would establish a winter trail away from the noise and exhaust of city traffic; a path to enjoy not only that day, but on subsequent visits, too, should the mood strike me. Along the way I would exercise body and spirit while working to ease that certain “wild” still lingering in me.

I started out breaking trail through snow nearly two feet deep, the top four or five inches a freshly fallen, feather-soft powder. My new snowshoes — stubby contemporary models with aluminum frames and nylon decks in place of webbing — seemed to work as well as my old Alaskan Trails. Those old shoes, chucked years before at a garage sale, were narrow and five feet long. Light, but sturdy, they had traditional steamed birch frames and were webbed with babiche (a term of French-Canadian origin for the rawhide strips once universally used to build snowshoes). The Alaskan Trails had a classic look and feel evocative of old-time Alaska, but the new ’shoes, an October birthday gift from my wife, promised to take me where I needed to go.

Alaska’s Native people, particularly those of the Interior, and residents of Arctic and subarctic climates worldwide crafted and used snowshoes for thousands of years. Even today in difficult terrains where more efficient means aren’t practical mountaineers, mushers, and trekkers of all kinds frequently turn to snowshoes. Beyond that, snowshoeing has evolved to transcend mere necessity and become, as the Outdoor Industry Association reports, the world’s fastest-growing winter sport.

Many interested in year-round outdoor recreation have discovered that in addition to making passage possible through rugged, snow-blanketed landscapes, snowshoeing also provides superb exercise. A person snowshoeing on a given winter day can burn more than 600 calories an hour — that’s 45 percent more calories than walking or running at the same speed, according to research by Snowsports Industry of America, a nonprofit trade association.

Of course, the snowshoeing renaissance extends throughout North America’s wintery regions, but few destinations pledge more varied or immediately available opportunities to step out, get in an excellent cardiovascular workout, and enjoy some of the world’s most beautiful scenery than Alaska. Snowshoes can be purchased for around $125 to $300 per pair, or rented for about $15 per day from outdoors retailers in most of the state’s larger communities. 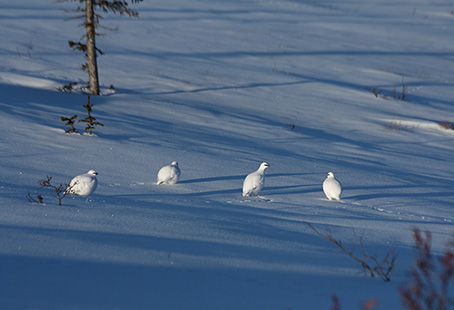 Hundreds of miles of snowshoe-friendly public-use trails are available in and around Alaska’s cities — from Juneau to Anchorage and north to Fairbanks. Whether visiting Alaska’s biggest city in February to attend the annual Fur Rendezvous celebration (a 10-day winter festival sometimes billed as Mardi Gras of the North) or dropping into the state capitol or the Golden-Heart City on business for just a day or two, snowshoeing promises an easy, healthy, inexpensive diversion.

“To one who lives in the snow and watches it day by day, it is a book to be read.”

–John Haines, The Stars, the Snow the Fire

The afternoon was cold, around -10 F on the high ground, dipping perhaps to -15 F in the hollows and creeks. I felt my beard freezing right away, a sort of dry, sticking sensation produced as frost collects under the chin and nose. For the first mile I broke trail along a ridge overlooking a creek bottom, stamping my way beneath tall birches bent like arches under heavy loads of snow.

Here and there I encountered stories written in the snow: The deep, posthole spoor of a cow moose and her yearling calf recorded a morning spent feeding on willows; the shallow prints of snowshoe hares and red squirrels crisscrossing a small glade suggested a moonlight dance the night before. And on a ridge descending into the creek I was astonished — delighted — to find in the snow the signature of a long lost friend: a pine marten. Nearly unmistakable to any trapper or naturalist who has studied them, marten tracks are distinguished by their size (similar in dimension to those of a housecat) and distinctive paired paw-print pattern. Cousins of the valuable Russian sable, marten are tree-climbing members of the weasel family, related to ermine, mink and wolverine. They are wilderness creatures most often associated with Alaska’s farthest-flung corners; to find one living within a mile of a busy Anchorage thoroughfare - and not more than three miles from my own home - was a welcome surprise. 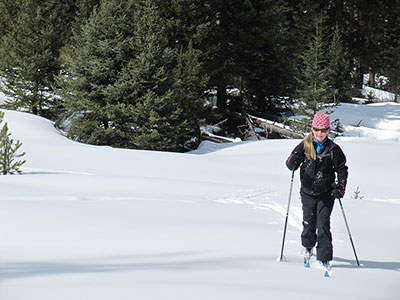 Afloat on my snowshoes, I marched along, following the tracks down the ridge, over logs and through an alder thicket. Where, I wondered, might this cat-size beast lead me? As it happened, it took me back in time, to the trap-line where I’d spent my days “watching the snow,” as the late John Haines (a poet laureate and trapper once himself) wrote, “reading what is written there, the history of the tribes of mice and voles, of grouse and weasel, of redpoll and chickadee, hunter and prey.”

Snowshoeing is one form of winter recreation popular among some Alaskans, but skiing is near and dear to the hearts of many more. Nordic, alpine and downhill skiing is eagerly embraced here, the sports forming the impetus behind many community clubs and groups.

Groomed Nordic ski trails are prevalent in and around many communities, with more than 100 miles of Nordic ski trails groomed for classic cross-country and skate skiing available in Anchorage alone. Popular Anchorage area trails are included at Kincaid, Far North Bicentennial, and Russian Jack Springs parks. Elsewhere, skiing opportunities can be found at the Beach Lake Ski Trails in Chugiak, the Matanuska-Susitna Borough Ski Trails near Palmer, the Birch Hill Trails in Fairbanks, and the EagleCrest and Mendenhall Glacier trails near Juneau. Trails in Anchorage, Fairbanks and Palmer offer lighted sections convenient for after-work nighttime skiing.

Anchorage-area downhill skiers short on time or just learning the sport can get started at Hilltop Ski Area just a 15-minute drive from downtown Anchorage, while Arctic Valley ski area north of town offers four open bowls, a terrain park and 25 trails that receive about 250 inches of snowfall annually.

Eaglecrest ski area on Douglas Island near Juneau is a popular Southeast Alaska destination. Featuring 34 marked alpine runs and access to some superb backcountry skiing, Eaglecrest boasts 1,400 feet of vertical drop and an average snowfall of 200 to 300 inches. 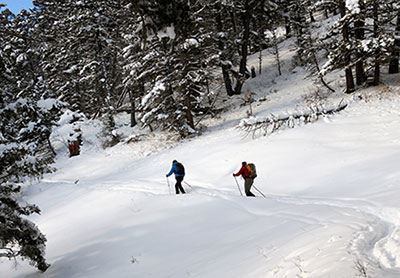 As with snowshoes, skis and boots can be rented by the day in Alaska’s larger communities. Find rentals at places like REI and Alaska Mountaineering and Hiking in Anchorage, Alyeska Resort in Girdwood, Beaver Sports in Fairbanks, and EagleCrest Resort or Foggy Mountain Shop in Juneau.

I’ve reached the creek, my turnaround point, and can hear it gurgling cheerily beneath a thick sheet of ice. Hoarfrost-coated willows and alders, branches fat and fluffy with icy-white rime, border the channel. New tracks are visible: A female mink (the small-sized prints indicate the animal’s gender) has poked around the willows hunting mice, and a pair of coyotes has trotted upstream, headed in the direction of a beaver pond. Best of all, a slender trough plies the snow in the creek’s center: river otter.

Otters slide over the snow on their bellies, leaving distinctive, trough-like trails. Feeding mostly on fish, they hunt under the ice, entering streams in places where fast-flowing water remains unfrozen. To find otter tracks at the edge of a city of 300,000 is a precious gift indeed; the happy result of nature at its best, running wildly, but quietly, within an easy walk of city skyscrapers.

The temperature is dropping. Time now to turn around, hike back up the trail under a gathering crowd of stars. I can hear Anchorage traffic hissing faintly in the distance. Over the mountains, a full moon scales the backsides of the highest peaks. Caught between past and present, there’s no denying the wild still lingering in me. Today, though, I’ve seen enough; the wolf for now is satisfied. In a heartbeat I’ve turned and regained my stride. Back to the forest I go.

Ken Marsh is a writer, photographer and lifelong Alaska outdoorsman. He serves as an information officer with the Division of Wildlife Conservation, based in Anchorage.