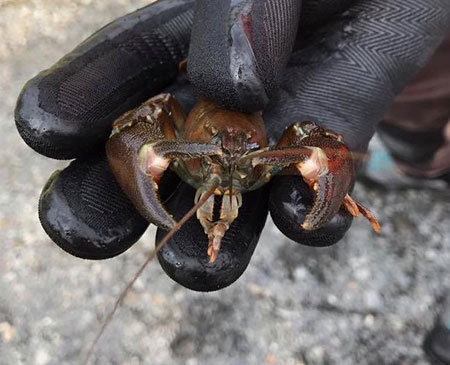 As an invasive species biologist with the Alaska Department of Fish and Game (ADF&G) I had heard reports for years of crayfish in Kodiak’s Buskin Lake. Last summer, I finally had the opportunity to visit this lake and thought maybe I’d finally have the chance to catch a glimpse of what I had expected to be a rather elusive non-native critter. What I didn’t expect was to be at the lake for literally seconds before finding a crayfish under the very first rock I turned over…and then another… and another… and another. I had no idea they’d be that prolific and easy to find. Captivated, as well as alarmed, I got my ADF&G buddies from the Kodiak office to lend me a dry suit, mask, and snorkel and off we went. We spent a couple of hours that morning snorkeling the southeastern shore of the lake where the crayfish tend to be concentrated, and we found no shortage of these miniature lobster-looking crustaceans lurking beneath the rocks and logs along the shoreline.

These seemingly common rather than elusive critters are not, in fact, lobsters. They are crayfish, particularly signal crayfish (Pacifastacus leniusculus). It’s a little unclear exactly when they started showing up in the Buskin or how they got there, but they’ve been reported since about 2002. No species of crayfish are native anywhere in Alaska. The red swamp crayfish, native to the southeastern U.S. (Procambarus clarkii), has occasionally been found in various places throughout the state, including the Kenai River. The specimens found have always been leftovers from ‘Cajun Crawfish’ boils and have either been discovered as carcasses or, in the few cases of live ones, failed to successfully establish reproducing populations in the wild. Biologists with the Sun’aq Tribe of Kodiak discovered three dead red swamp crayfish in the Buskin drainage as recently as 2016. However, while the red swamp crayfish has not yet established populations anywhere in Alaska, the signal crayfish certainly has, and we’re not sure what this means.

Signal crayfish are native to Washington, Oregon, Idaho and parts of British Columbia. They are easily recognizable by a distinctive white oval patch at the hinge of their claws that is the basis of their name, ‘signal’ crayfish. Adults are most commonly found between 2.5 and 6 inches long, but large ones can get up to 8 inches. Aside from the white patch, the claws of the signal crayfish are smooth whereas claws of the red swamp crayfish are covered in small reddish bumps called tubercles. Signal crayfish mate in the fall. The females then carry clutches of up to 400 eggs beneath their abdomens until their eggs hatch in the spring. Signal crayfish begin reproducing by three years of age and can live of up to 20 years. They have an omnivorous diet consisting of plants, algae, detritus, invertebrates, small fish, and fish eggs. The composition of their diets in Buskin Lake is presently unknown, but research is underway by the Sun’aq Tribe of Kodiak to answer this question. 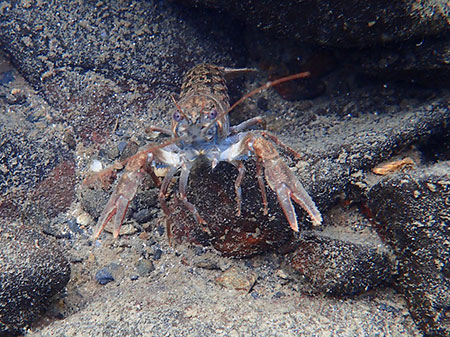 Signal Crayfish in the rocks in the southeast end of Buskin Lake. Photo Credit: Kelly Krueger

What we do know is that there are plenty of places in the world where signal crayfish have been introduced, and in these cases, the stories tend not to have happy endings. For example, in the early 1900s, signal crayfish were introduced to California. From one single point of introduction, they spread throughout much of the state, and they became extremely abundant. They turned out to be formidable competitors with California’s native crayfish and ultimately led to the extinction of the sooty crayfish (Procambarus nigrescens). California now has only one remaining native crayfish species, the Shasta crayfish (Procambarus fortis) which is currently a Federally-listed endangered species found only in one county in the northern part of the state. Resource managers in California are trying to prevent signal crayfish from getting into the few locations where Shasta crayfish remain for fear that they would suffer a similar fate as the sooty crayfish.

In the 1960s, signal crayfish were imported to Scandinavia to supplement commercial and recreational crayfish fisheries because a disease called ‘crayfish plague’ had severely reduced populations of native European crayfish (Astacus astacus). The rational was that signal crayfish occupied similar habitats and niches in North America and could help support the commercial crayfish fisheries in Scandinavia. Unfortunately, signal crayfish turned out to also be carriers of crayfish plague. The disease only effects populations under stress, so in this case, the introduced signal crayfish were not affected by the disease, but they continued to pass it on to the European crayfish, further depressing their populations. Unfortunately, over the decades, signal crayfish have now spread to over 25 European countries and have also been introduced to Japan. Their commercial value is less than half of what native European crayfish would be worth. In addition, signal crayfish can dig extensive burrows in river banks and, in England, have been identified as a cause of river bank collapse and increased flooding risk. In other locations throughout Europe, signal crayfish have been found to decimate populations of invertebrates that live in the substrate of lakes and rivers. Through predation and burrowing, they also reduce aquatic vegetation growth. Ecosystem changes like this can indirectly cause declines in fish populations by altering aquatic food webs, changing aquatic habitats, and reducing vegetative cover for small fish to hide in and avoid predation by other predators. For these reasons, the signal crayfish is now considered an invasive species in most places it has been introduced. 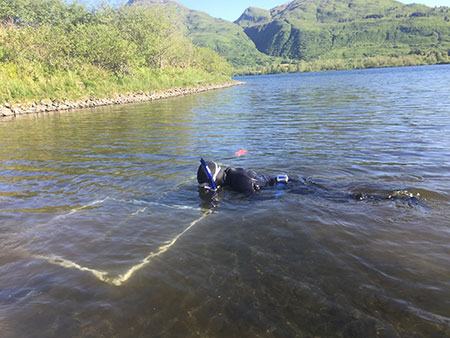 So, what does that mean? Invasive species, by definition, are species that are both non-native to an area and can cause harm, either to the environment, the economy, or some aspect of human health. In California, the signal crayfish has led to the extinction of at least one native crayfish species, thus having a negative ecological effect. In Europe, it did the same by spreading disease throughout native crayfish populations. As a result, it replaced native crayfish in commercial fisheries throughout many areas of Europe, but because of the lower commercial value of signal crayfish, there is an economic impact. Now here in Alaska, we don’t have native crayfish, so some of the concerns that have contributed to the signal crayfish’s ‘invasive’ status elsewhere don’t really apply here. However, if you peruse research studies on signal crayfish diets from Europe and California, you’ll find a lot of references to fish predation. Some studies have even implicated signal crayfish in the decline of native fish populations, both through direct predation and because of the indirect ecological affects I described earlier. Is this happening in the Buskin? We don’t know. If similar effects would be documented, the ‘invasive’ status of signal crayfish in Alaska would be a lot clearer. Hopefully, we’ll gain a better understanding of this soon.

Over the last few years, Sun’aq Tribe of Kodiak and Kodiak Soil and Water Conservation District have been working with ADF&G, U.S. Fish and Wildlife Service, and other partners to learn more about the Kodiak crayfish invasion. Since 2016, the Tribe has led several studies to document distribution and abundance patterns throughout Buskin Lake and the Buskin Watershed. This study tested out various capture methods such as electrofishing, seining, minnow trapping, dipnetting by hand, and snorkeling. According to Kelly Krueger, the lead biologist on this study, 1,086 signal crayfish were removed from Buskin Lake between 2016 and 2017, and electrofishing, hand capture with dipnets, and snorkeling surveys were the most efficient capture methods. This study found that the distribution of signal crayfish was restricted to Buskin Lake, but that has recently changed. With what had to have been the result of someone moving them, a single signal crayfish was found and caught by hand from an angler outside the Buskin Watershed last fall in the Old City Reservoir in the heart of the city of Kodiak. 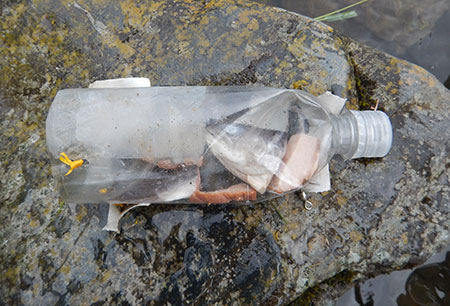 With initial distribution now documented, Kelly and her team will continue to hone in on distribution patterns by investigating their movements and seasonal habitat use. They will be trying to determine how many signal crayfish there are in Buskin Lake and will conduct some sophisticated analyses to look at exactly what they are eating. There is a lot left to learn and many unanswered questions, but one thing is certain, these questions wouldn’t even exist if this non-native species had not been introduced in the first place. When it comes to invasive species, prevention is always the best and most cost-effective strategy. Whether a non-native species has the potential to be invasive or not is beside the point. It’s best not to take the chance. Never release a live organism that is not from here to Alaska’s waters.

While the jury may still be out regarding the level of impact signal crayfish are having in the Buskin, it’s always best to err on the side of caution, and there are ways you can help. First, you can help reduce crayfish numbers by fishing for them. Because they are not native, there is no limit. However, this recommendation comes with some caution. Many people in Kodiak have been manufacturing their own crayfish traps. While harvest of crayfish is encouraged, bycatch of fish and other critters is not. According to Michelle Stratton, ADF&G fishery biologist in Kodiak, these homemade traps are often left out for extended periods, forgotten, or lost, and they end up inadvertently catching and killing lots of juvenile salmon. Please be mindful of this and do not leave homemade traps or pots out unattended for extended periods. Always label your trapping gear with your name and contact information. Again, the Sun’aq Tribe’s study showed that capturing crayfish by hand with dipnets or while snorkeling were among the most successful methods. Please fish for crayfish using methods like these and avoid unintended consequences caused by derelict fishing gear. 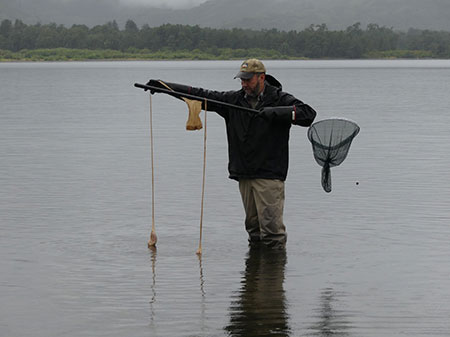 Derelict homemade crayfish trap made from a pair of nylons. These can kill large numbers of juvenile salmon. Photo Credit: Kelly Krueger

If you are fishing for crayfish in Kodiak, please share your harvest information with researchers in the area. The Tribe has posted signs throughout the Buskin watershed with sheets to record your harvest totals and locations. You can also contact them directly at 907-486-4449 or sunaq.org to report your harvest information or inquire further about their research. Of course, do not move crayfish around in Kodiak or anywhere in Alaska, either intentionally or unintentionally. Transporting any live aquatic critter in Alaska is illegal. It’s a class A misdemeanor and has a hefty penalty. If you see anyone releasing crayfish or anything else into Alaska’s waters, immediately contact the Alaska State Troopers and your local ADF&G office. Finally, if you catch a crayfish anywhere outside of the locations mentioned in this article, please report it by calling 1-877-INVASIV or through ADF&G’s online invasive species reporter. The same applies if you catch or observe anything that doesn’t look like it’s supposed to be here. Even if it turns out to be a native species, we’d rather you report it just in case. Again, prevention is our best defense against invasive species, and with your help, detecting new problem species early can aid eradication success down the line and ultimately help protect Alaska’s fish and wildlife.

Kristine Dunker is a biologist with the Alaska Department of Fish and Game in Anchorage. She assists ADF&G’s Invasive Species program by coordinating northern pike and other invasive species efforts throughout Southcentral Alaska.