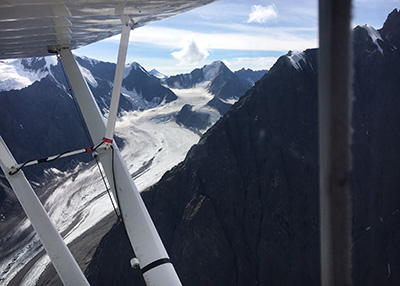 Lets set some ground rules right from the beginning. I’m not an experienced big game hunter. I’m definitely not a sheep hunter. And most all, if you’re reading this story to hear some grand adventure that results in a 42” trophy Dall’s sheep ram harvested high on a wind-swept mountain top, you’ll be sorely disappointed. This story is rather about a naive flatlander experiencing the hardships and subtle sweet rewards of sheep hunting for the first time.

I grew up grouse and duck hunting in the flatlands of northern Wisconsin in the flat southern extent of the Boreal forest (notice I used “flat” twice). As a little kid with unlimited freedom in the woods, on rare occasions when I encountered “hills,” I convinced myself I was climbing the great peaks of the Rocky Mountains or Himalayas. Wind scoured alpine, mountains, climbing, mountaineering, and glacial travel were only things I witnessed in magazines and learned about in the many adventure stories I pored over in my youth.

I’ve now lived in Alaska for nearly 20 years and have had some great adventures in the mountains. However, I’ve realized people that grow up hiking and traveling through the mountains seem to have a natural affinity for how to move and progress through them. During my years in Alaska, I began big game hunting and have since had the great fortune of harvesting several caribou, moose, and even a mountain goat. However, during the late winter of 2017 I received a highly coveted draw permit for Dall’s sheep in the Chugach Mountains. The day the draw results were announced I received many congratulatory e-mails, a couple phone calls, and some back slaps. This I knew was a big deal.

You see, I left out a critical piece of the puzzle; I work for the Alaska Department of Fish and Game. Through my many years working in the office I’ve come to realize that Dall’s sheep are the ultimate trophy for resident and non-resident hunters alike. It’s a species that requires the hunter to be in strong physical shape, have experience or at an absolute minimum a calm confidence in the mountains, some level of backcountry prowess and know-how, good marksmanship, and some level of big game hunting proficiency. Over the years I witnessed hundreds of sheep hunters come in and out of our doors having achieved, in many cases, a life-long goal and radiate intense joy due to the challenge that Dall’s sheep pose. These animals are exceptionally hardy, strong, and possess unmatched agility in the mountains. Anyone that opts to be in their environment (hunter or non-hunter) must do so in the sheep’s nearly vertical, harsh, and stunningly beautiful world.

After receiving the draw tag I knew I needed to begin preparing and fast. I don’t consider myself a couch potato but in order to ascend several thousand vertical feet into the mountains with a 60 pound pack would require me to dramatically step up my game. A good friend of mine offered to go with me and we both began training. I spent a lot of time hiking into the mountains in the evenings after work behind my house, I convinced my wife we needed to update some of our backpacking gear with the incredibly light weight gear available now and a far cry from the early-90s vintage gear we currently had, poured over maps of the hunt unit, and tried gleaning as much information as possible from others that had spent time in the area. To my disappointment, my hunt unit was known for being one of the steepest in the Chugach Mountains…whew, I can do this. I also began psychological preparations. Many sheep hunters have reported day after day of heavy fog, rain, and wind, tent bound and wet. I wanted to begin mentally preparing for just such a scenario. I began doing yard work in the rain, under-dressed, and wet. As silly as this sounds I knew this opportunity could likely be a once in a lifetime and I didn’t want to leave anything to chance…boy was I naïve! 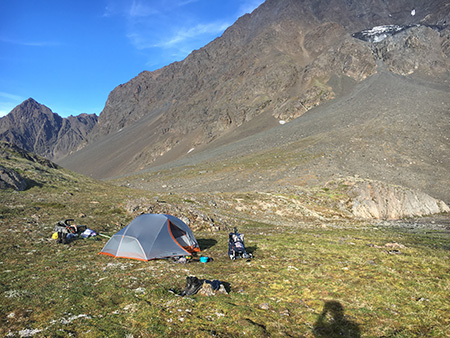 Through the information gathering process, I realized I had to make an executive decision regarding how to get into my designated hunt unit. Flying proved to be the most practical way to access my hunt unit. However, there were even very few options for landing near or just inside my hunt unit. Based on terrain and past success from other hunters I spoke to, I opted for a landing strip about three to four miles outside my hunt unit provided our pilots could get us there. From there my hunting partner and I would walk up and into my hunt unit and then have to back out the same way.

The day came to fly out, my buddy and I were ready. We had our shiny new gear, we felt as strong and fit as a couple desk-jockey middle aged men could, and the weather was beautiful and sunny. The flight through the mountains was stunning. I was living my childhood stories, soaring through craggy, glacial covered peaks with no sign of civilization for miles. I had never been deep into the Chugach Mountains and they were dramatically more foreboding than the foothills outside Anchorage. We made as smooth of a landing as a little Super cub can with 35” tundra tires over a cobble strewn strip adjacent to a small alpine creek.

My partner and I began our approach to my hunt unit with thoughts of abundant sheep buzzing in my head. We hiked the three or four miles up a narrow, steep walled valley and made camp for the night. The further we ascended the valley the steeper and more dicey the travel became. We camped adjacent to a very small alpine creek with views that rivaled any coffee table book about “Alaskan Scenery” I’ve ever seen. Watching the shadows move through the peaks and the change in color of the glacial faces as the sun slowly slipped below the nearby ridges were enough to humble and amaze me.

The next morning we awoke at 4am to the calls, more like screams, of the high alpine dwelling white-tailed ptarmigan right outside our tent. Not being able to fall back asleep after they moved on about 5am, I got out of the tent to again be dazzled by the growing light across the eastern sky and watch the morning alpine glow shine in the tops of the nearby peaks. Today was yet another rare and beautiful late summer day and the day we planned to get into my hunt unit and begin hunting. After a quick breakfast my partner and I began our slow plod up the steepening valley to the surrounding ridge line. As we ascended towards the ridge that separated us from the hunt unit the valley seemed to be covered in nothing but dinner plate to cookie sheet sized shale. After several missed approaches we finally found a route up to the ridge line where for the first time we could peer into my hunt unit.

Not wanting to spook any rams that might be just below the ridgeline, we dropped our packs and belly crawled up to the point where we could look down. I don’t consider myself afraid of heights, prown to vertigo, or squeamish in the mountains. However, when I peered down into my hunt unit from where we ascended the ridge I was overcome by the updraft and sheer vertical face immediately below us. I felt a quick rush of adrenaline and fear that the wall below us would not provide the best means of access. However not deterred we enjoyed our accomplishment of ascending to this ridge from our camp. With rare and ample sunshine, warm temperatures and a small band of five rams 1,000 vertical feet below we remained very optimistic. 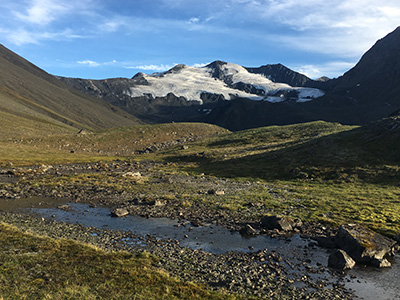 We spent the next three hours prospecting a mile or more down either side of the ridgeline for a way off the ridge and into my hunt unit. We located the only option, down a 150-200 vertical foot, steep scree death ride that would be scary and dangerous to go down let alone very difficult if not impossible to ascend, loaded with 80-100 pounds of sheep over wet rocks as we knew a storm was moving in shortly. Upon the realization of this reality, my partner and I sat in quiet reflection for several moments. Could we do this? do we WANT to do this? What other options exist for getting off this ridge? Is this how the hunt ends? after all of the physical, mental and gear preparation. Not wanting to give up I made one more approach to the crux of the decent and stared down the slope and into the updraft…hmm.

Lying in my bed as a 10-year-old boy reading my Outdoor Life and imagining myself as Daniel Boone or other life-long backcountry dwellers I always knew that I would charge off that ridge and embrace the full experience for good or for bad. Fast-forward 35 years, with a wife, three young kids, and a growing list of too many near misses already, I felt different. I realized at that moment I didn’t need to shoot a sheep to make the trip worth it. The trip had already been worth it. Soaring through this immense landscape in a small Super-cub, the remote hiking and camping in a valley that few will ever even know exists, the early morning ptarmigan wake-up call, and the incredible alpine glow surrounded by glacial capped peaks, that is what I was seeking all along. Sitting there staring down into my hunt unit at that band of five rams bed down on the valley floor was icing on the cake. That sheep hunting trip made me realize the best things in life are rarely the destination but rather the journey. I had been too caught up in “sheep” fever to realize the real rewards about hunting are the shared experiences with close friends and family, the stories, and the little memories like filling your water bottle from a crystal clear alpine creek.

I hiked back up to my partner who anticipated my potential disappointment. We talked about our next move in the sun lying on a tiny patch of high alpine grass and crowberry. We decided together to avoid the scree death ride and simply return to our beautiful camp from the previous night and enjoy some more stunning mountain views for one more night. That night lying in our tent I felt very fortunate to have received this sheep tag, otherwise I would never have experienced the things that we were so fortunate to have experienced. I only hope as my own kids grow and experience the bounty Alaska has to offer that they too can enjoy the journey more than the destination.