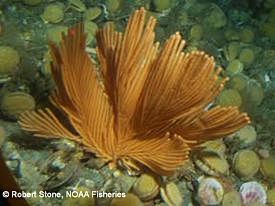 Fanellia spp., one of the many species of soft corals often seen in great profusion from the research submersible Delta.

Most people associate brilliant coral displays with snorkeling in the tropics, not with the cold waters of the Aleutian Islands of Alaska.

In July of 2002, large tracts of colorful coral gardens were discovered in the Aleutian Islands of southwestern Alaska. Scientists estimated that as many as 100 species of coral were flourishing 300 to 5,000 feet beneath the surface.

Unlike their tropical counterparts, the Aleutian corals do not need light to survive, but instead rely on nutrients from the water column. They also grow more slowly in their colder habitat and grow out of a rock reef instead of a coral reef — thus the term coral “garden,” coined by Bob Stone, a marine ecologist with the National Marine Fisheries Service.

“When corals in Alaska die, the skeleton washes away. The tropical corals propagate themselves by living on their own skeletons,” Stone said.

While scientists have been aware of deep-sea coral in Aleutian waters, the discovery of coral gardens was a surprise. For years deep-sea trawlers have brought aboard chunks of coral, but the presence of such a diverse, colorful array of coral was not confirmed until July of 2002.

“We’ve known these corals were out there, but we had no idea how rich and dense the beds of coral gardens would be,” said Doug Woodby, a fisheries scientist with the Alaska Department of Fish and Game, who saw the gardens from the Delta submersible in June 2003. “You can’t see the bottom — you can’t even see the rocks.”

State Fish and Game is involved because much of the coral is within state waters – less than three miles offshore. Research on the coral gardens is funded by the National Undersea Research Program and the North Pacific Research Board. 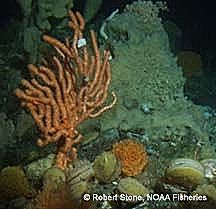 Calcigorgia spp., another species of soft corals encountered during submersible dives around the Aleutian Islands.

Scientists hope to gather information on densities of coral and sponges, and learn more about their habitat—substrate, slope, depth, and location — and to predict other areas where they may be found. From this data, they will be able to learn more about important fish habitat for the resident species.

The coral provides crucial habitat for Atka mackerel, Pacific cod, and rockfish, which make up a significant portion of the commercial groundfish catch. All told, the industry is worth about $1 billion a year. The coral is also home to many other, less well-known varieties of marine life.

“We saw several kinds of dumbo octopus; one did a little dance in front of the window, and another we lifted up with the manipulator arm and it stared at us with a tiny little eye,” Woodby said.

Damage from fishing gear was also discovered. Scientists saw broken corals, sheared sponges and large areas where coral had been stripped from the bottom.

Dave Carlile, a biometrician at the Department of Fish and Game, has participated in two dives aboard the Delta submersible to view the coral gardens. Part of the North Pacific Research Board’s two-year project to study coral in the Adak area involves determining how damage from trawl gear affects groundfish populations.

“Any type of gear that touches the bottom can affect the coral. We found two abandoned king crab pots on one dive,” he said.

One trawl can crush or dislodge tons of coral. The National Marine Fisheries Service estimates that between 1991 and 2001, as much as one million pounds of coral and sponges were hauled aboard each year by the groundfish industry.