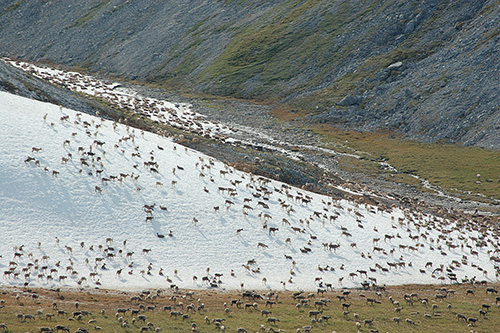 Caribou in Northwest Alaska bunch up on a snowfield to avoid harrssment by biting insects.

"At least three of those herds wouldn’t have been photographed (last summer) without the new system," said Wildlife Biologist Nate Pamperin of Fairbanks.

During the summer when caribou are harassed by insects, a herd groups together and escapes to the ridgelines, snowfields, and coastlines. This type of grouping behavior allows biologists to monitor caribou by flying over herds with cameras mounted in small aircraft and taking photographs of the groups.

Why are surveys necessary? 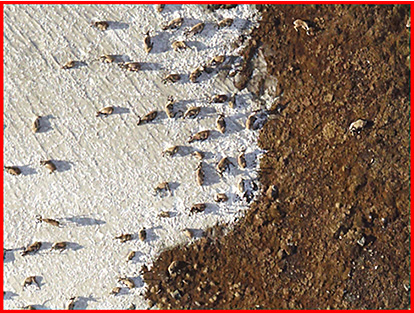 Individual caribou can be picked out on the snow in this image taken by the new digital camera.

Caribou are used by many people in and around Alaska, including local community residents, resident non-local hunters, and non-resident hunters. To ensure that there are enough animals in the herd to sustain current harvest by these groups, herd managers need to know the population size. Without this information, they must manage the herd conservatively and cannot increase or decrease hunting opportunity according to herd population dynamics.

Photocensus counts are important caribou management tools that help biologists track and manage herd population trends. Findings are used by advisory and regulatory boards as well as state and federal wildlife managers to help determine bag limits and hunting seasons. Regular herd surveys also allow biologists to detect problems in the herd early on, before there is a serious decline. Disturbance to the caribou during these surveys is minimal and the information gained is extremely valuable. 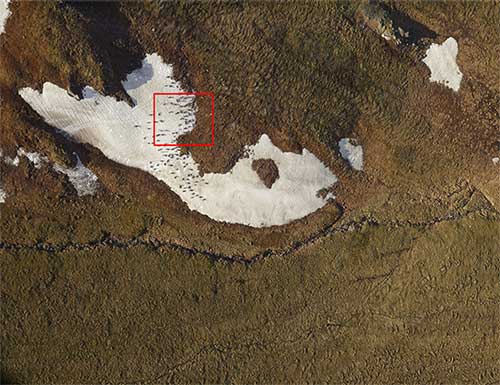 The image above is a section of this larger image.

Since the 1970s, ADF&G has used the same World War II era black and white film camera to photocensus Alaska’s caribou herds. The old systems, which featured Zeiss RMK-A large-format film cameras, functioned poorly in low light conditions, covered limited ground swaths, and cost precious time by requiring pilots to periodically land and reload film. In the fall of 2016, the department upgraded to a new digital system that is linked to GPS and compatible with innovative software. There are four main benefits to the new system: 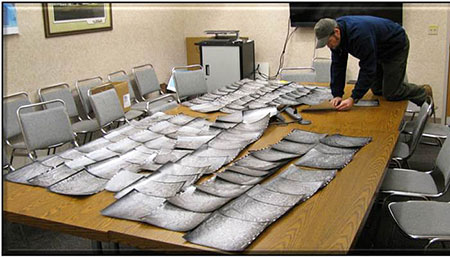 In the past, staff had to manually lay out 9-inch by 9-inch printed photographs, delineate overlap, and determine which parts of each photo were to be counted.

"Our Western Arctic herd count would not have happened with film last summer because of poor light on the second day," said Pamperin. "In several other situations last year the larger ground swath of the new system allowed us to photograph large groups that were rapidly moving or widely scattered – situations that were problematic for the film systems." 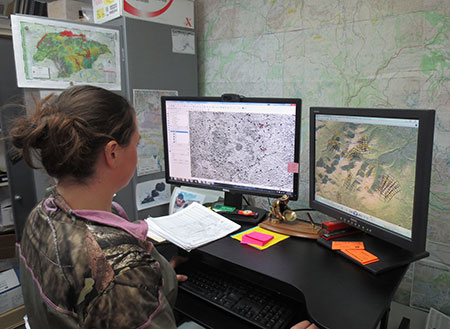 The digital cameras produce superior color images that can be inspected immediately for quality. In addition, new software enables individual images to be stitched together and georeferenced so that each caribou group can be viewed as a single image mosaic. In the past, staff had to manually lay out 9-inch by 9-inch printed photographs, delineate overlap, and determine which parts of each photo were to be counted. It was a tedious process that sometimes took weeks to accomplish.

The new systems were purchased with funds generated by hunters and shooting sports enthusiasts through payment of federal taxes on firearms, ammunition, and archery equipment, and through state hunting license and tag fees. For more information about caribou photocensus work, contact Nate Pamperin at (907) 459-7377 or nathan.pamperin@alaska.gov.