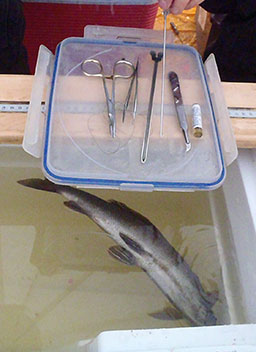 Arctic grayling under anesthesia prior to surgery to implant a radio tracking device. Note the radio transmitter with its long antenna on the right-side of the surgical equipment tray. Photo by Brian Collyard.

You have heard and read the stories before, often recounted by anglers. People tell a tale of seeing a UFO and being abducted by aliens. Often, they are laid on gurneys to be poked, prodded, and inserted with tracking devices. Well, imagine the stories a grayling must tell its companions when an Alaskan fish biologist steps out of a boat, captures it, and inserts a radio tag into it for the purpose of revealing its secret migrations.

Even more interesting are the stories the grayling have told biologists.

Some grayling have had incredible journeys - and we know this thanks to radio tags. These tiny transmitters are valuable tools helping biologists understand important aspects of Arctic grayling populations and their behaviors, which provide insights into managing their fisheries.

Radio tags are small electronic radios with a battery and a long, thin transmitting antenna. The tags vary in size dependent on the power requirements (signal strength and longevity) that dictate battery size. Thankfully, the radio tags can be programmed to emit signals at predetermined times, which conserves power and reduces battery size. This is important for a small fish like the grayling because these tags, which are about half the size of an AAA battery, are implanted internally.

The procedure to implant radio tags is about 15 minutes long. It begins soon after initial capture, when a grayling is placed in a tub holding a solution of river water and a form of clove oil that acts as an anesthetic. After about 5 minutes, the fish is fully anesthetized, and the surgery quickly follows. A small incision is cut in the abdominal cavity, and the radio tag is placed inside. The antenna is routed through the abdominal cavity and exits just behind the pelvic fins. The incision is then sutured shut with 3 stitches. After the 3-minute surgery, the fish is placed in a recovery tank for about 8 minutes, after which it is released back to the river. 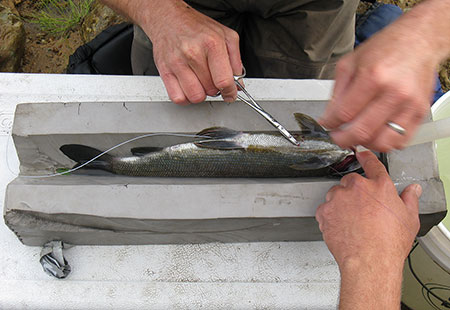 Placing sutures at an incision during surgery. Photo by Brian Collyard

The radio tags emit a signal that can be detected from up to 10 miles away. Depending on how the radio tag was programmed, each Arctic grayling will be located by periodic aerial surveys over the next 18-36 months. In addition, tagged fish can be detected passing radio tracking stations that are placed at important boundaries such as the mouth of a tributary, which is useful for determining when fish are migrating.

After several radio telemetry projects, a general pattern has emerged among adult (greater than 12-inch) Arctic grayling in the Tanana upland rivers such as the Chena, Salcha, and Goodpaster rivers. During summer, Arctic grayling are spread throughout the upper Chena, Salcha, and Goodpaster rivers and their tributaries where food is plentiful, and the water is cool. As water becomes colder in late August, fish vacate small tributaries and upper portions of each drainage because of the impending loss of habitat during winter, when river discharge reaches annual lows and some streambeds go dry while others freeze to the bottom. Grayling slowly migrate until early December and seek out one of many overwinter locations throughout the mainstem of each respective drainage (Chena, Salcha, and Goodpaster rivers). During winter, food becomes scarce, and Arctic grayling seek out habitat that has low velocity water to minimize energy expenditure, has suitable water depth, oxygen, and no frazil ice (ice that forms in turbulent water so it doesn’t freeze solid), and that does have surface ice that provides cover from predators. These overwintering areas are likely limited, and in conjunction with a reduction in metabolism due to the cold water, these normally competitive fish may be found in dense overwintering aggregations. 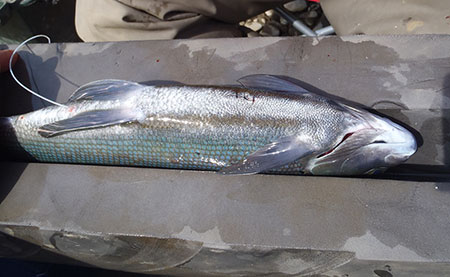 Stitched up and ready for recovery. Note the radio antenna towards the tail of the Arctic grayling.

By early April, Arctic grayling begin to stir in anticipation of breakup and spawning. Grayling typically migrate short distances to their spawning areas just before and after breakup, which usually occurs in early May. Spawning is usually complete within two weeks of breakup, after which they quickly migrate to their summer feeding grounds. They must be hungry after a long winter without food because they move quickly. For example, some Lower Goodpaster River spawners are destined to go to the Delta Clearwater River, and they traveled 10 miles of the Tanana River between the two in about 24 hours. Other spawners in the Lower Goodpaster River head to its upper reaches, traveling much further but with as much determination. One individual traveled 105 miles to the Upper North Fork Goodpaster River in just 15 days, moving an average of 7 miles a day. This fish traveled well over 200 miles within a year as it had also moved downstream 117 miles the previous fall. 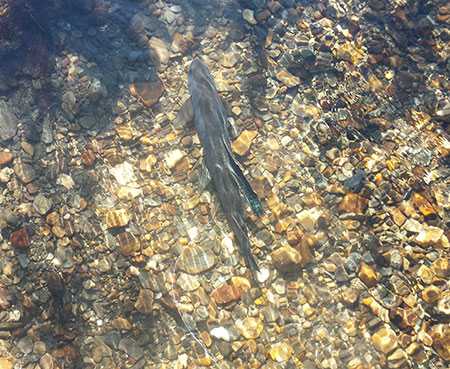 Fully recovered from surgery and swimming away from the on-river operating room.

Not all grayling move extraordinary distances. Some individuals in the Goodpaster River moved no more than 10 miles throughout the year, despite many others moving great distances. In the Delta River, no grayling were found to move more than 10 miles; however, the Delta River presents a different situation. Grayling are prevented from moving upriver to the Tangle Lakes by significant waterfalls. Grayling did not move downriver beyond the glacial Eureka Creek tributary during any season because seasonal habitats were unavailable in the wide, braided, shallow, and silty river.

Arctic grayling have also shown a propensity to be very selective of where they reside in a river during each season. For example, a radiotagged grayling in the Salcha River featured in the map traveled 50 miles between the same spawning and summer habitats two years in a row. In fact, it spent its summers in the first pools to form in a valley floor below mountainside springs. And, of course, some fish do exactly the opposite. The grayling featured in the next map spent a summer in the Upper Goodpaster, and then spent the next summer 114 miles away in the Delta Clearwater River. 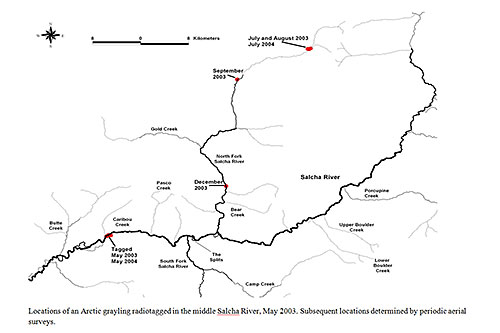 Locations of an Arctic grayling radiotagged in the middle Salcha River, May 2003. Subsequent locations determined by periodic aerial surveys. The grayling traveled 50 miles between the same spawning and summer habitats two years in a row.

What does all this mean? A grayling needs seasonal habitats (summer feeding, overwinter, and spawning). The habitats may be near or far, and in one direction or another. A grayling may move downstream to winter habitat in the Goodpaster River, but in the Kuparuk River on the North Slope, a grayling may move upstream to a lake. If a feeding location didn’t work out one summer, a grayling may move to another area far away for the next summer. Maybe it was too crowded, too hot, or not enough food. They are kind of like us. Some people like to live far away from everybody in a remote wilderness location, and others want the action of a big city with lots of people. We move when there is no work or migrate seasonally for work. In the end, it is the ability of a grayling to find seasonal habitats consistently and to move and find new areas when conditions change for the worse that makes them a resilient and well adapted fish in the Arctic. It is no wonder they are most widely distributed freshwater fish in Alaska, and occasionally encountering their own version of UFOs.