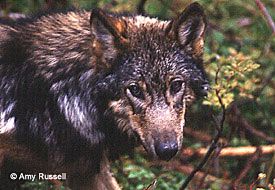 The wolf puppy was fishing in the intertidal zone, working the riffles where salmon were exposed in the shallow stream. She waded into the water to grab a fish and pulled it flopping onto the bank, where she ate just the head.

It’s a scene Dave Person has witnessed many times. The Alaska Fish and Game biologist has been studying wolves on Prince of Wales Island for 12 years, documenting habitat needs, denning requirements and a variety of behaviors. He’s monitored this fishing behavior with three packs of wolves over the past five years.

When people think of food for wolves, big game comes to mind: deer in Southeast, caribou in the north, and moose throughout much of the state. Big game is the mainstay for most wolves, but it’s all they eat. Researchers are finding that Alaska wolves also eat salmon. And they aren’t simply scavenging salmon carcasses. In late summer, when pink and chum salmon are running, Person has spent hours watching wolves actively fishing - catching, killing and eating salmon.

“They’re not as skillful as bears at fishing,” Person said. Most of the fishing takes place when the tide is low, on the flats where streams are crossing through the intertidal zone. The wolves target fish in shallow water and isolated in tidal pools.

“A lot of the time, when they’re all flush with salmon, they’ll bite the heads off and just eat the heads,” he said.

Salmon is an important seasonal food source, but it is especially important for the pups, Person said. For the youngest members of the packs, the chance to fatten up on fish in the fall can mean life or death over the winter.

The packs Person has studied are structured around one breeding pair. They mate in winter and the pups are usually born the last week of April or the first week of May. In early summer, when the puppies are nursing, the wolves stay pretty close to their dens in the forest. But in early July, when the pups are about two months old, the packs move out of their dens and relocate closer to the water.

“Each year they spend over a month in estuary areas, with the pups,” Person said. “It’s right in middle of pink and chum runs, and we watch them eat salmon all the time. There are lots of places they could go; I think they go there for the fish.”

Early fall is a vulnerable time for the pups. As youngsters, they were nursed and fed regurgitated meat. But as they are weaned and begin to join the pack on hunts, their role in the pack changes.

“They’re the low dogs on the totem pole,” Person said. “When a deer is killed, they may be the last ones to get anything to eat. So salmon is a real bonus food supply.”

That pays off for the wolf pups that Person has observed in Southeast Alaska.

“Salmon allows them to have a very high survivorship,” Person said. “In places like Minnesota, half the pups die in their first summer. Here, we’ve noticed a 90 percent survivorship; I think salmon may play an important part in that.”

Historically, salmon has been under-reported as a food source for wolves, in part because it doesn’t show up in wolf scat the way evidence of deer or beaver does. The bones, fur and hair in wolf droppings offer good clues to the predators’ diet, but wolves can completely digest salmon bones. There are invisible clues, however, and biologist Shelly Szepanski has pursued those.

Szepanski, a former Alaska Fish and Game biologist in McGrath, is now doing graduate work at the University of Alaska in Fairbanks. Over the years she heard stories about wolves fishing for salmon, and she decided to investigate. Her approach was not to watch wolves, but to look at what wolves are made of. 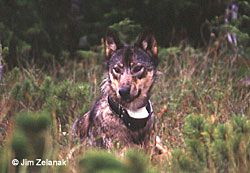 This collared wolf id the alpha female of a wolf pack on Prince of Wales Island.

“It’s true that you are what you eat,” Szepanski said.

The nitrogen, carbon and other elements in plants become the building blocks of animal tissue - and those elements can be traced as they move up the food chain from herbivores to predators. Those elements have distinct signatures reflecting their origin. Using a technique called stable isotope analysis, scientists can distinguish whether the carbon and nitrogen that make up an animal’s tissue has come from a marine environment or a terrestrial one.

A predator’s bone is derived primarily from the protein of its prey, and is an indicator of diet over the lifetime of the animal. Szepanski was able to take small bits of wolf bone and trace what percent of that wolf’s diet came from terrestrial sources – caribou or deer, for example – and how much came from marine sources, like salmon.

Szepanski contacted trappers and the University of Alaska museum for an assortment of wolf skulls and took small samples. She analyzed samples from about 200 Alaska wolves, selecting about 50 representatives from four different geographic regions: Interior Alaska, coastal mainland Southeast, Kupreanof Island and Prince of Wales Islands. The results indicated that wolves do indeed eat salmon.

“We always thought it was the bears that capitalize on salmon, but this shows wolves do too,” Szepanski said.

Szepanski found for some wolves on Prince of Wales Island, salmon was about 25 percent of the diet. The percentage was much higher for some wolves in northern Southeast, where deer and other terrestrial game are not abundant. These Yakutat-area wolves showed extremely high reliance on a marine diet, Szepanski said, comparable to coastal black and brown bears.

She pointed out that marine-derived food could come in other forms: wolves could be eating eulachon (hooligan) during the seasonal runs of those fish, and could forage in the intertidal. Wolves have been documented hunting harbor seal pups as well, and seal bones are found in the scat of wolves in the Cordova and Yakutat areas. But these marine resources are not available for the Interior wolves.

Szepanski looked at the variety in the wolves’ diet and found that Interior wolves’ ate mostly caribou and moose. For Southeast wolves, the diet is more varied; mostly deer, but including other herbivores – beaver, mountain goats and other small mammals. But the salmon is significant, especially for the pups. It’s long been known that wolves are opportunistic, but the varied diet and resourcefulness of Southeast wolves surprised Szepanski.

“Southeast is a gold mine for unique research,” Szepanski said. “The thought has been that ‘wolves are wolves,’ but Southeast is a unique ecosystem, and the things they've done to adapt to this ecosystem are amazing.”