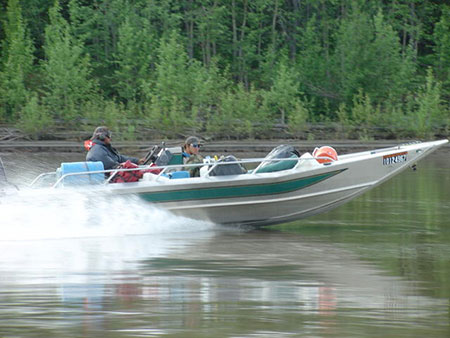 It’s probably safe to say that most power boat owners don’t give much thought to how, or why a boat ramp is there for their use. But each year thousands of power boat owners splash their vessels in Alaska’s lakes, rivers, and marine waters using boating access sites, or what are more commonly called “boat ramps” that are paid for, in part, by sport anglers.

Having public access boat ramps is something that we’ve grown to expect when we want to get out on the water. If you’ve used a public access site, it was probably built using funds from the Alaska Department of Fish and Game, Division of Sport Fish Recreational Boating and Angler Access Program.

This little-known program has made significant impacts on our ability to access the state’s fresh and marine waters by providing funding to complete access projects. These funds are generated through the Federal Aid in Sport Fish Restoration Act, commonly referred to as Dingell-Johnson, or D/J. This federal legislation, originally passed in 1950, was based on the premise of “user pay/user benefit” model which collects a federal excise tax and import duties on sport fishing equipment, recreational power boats, and gasoline used in power boats. The tax is collected by the U.S. Treasury, and transferred to the U.S. Fish and Wildlife Service. The Fish and Wildlife Service then distributes the money out to the states, based on a prescribed funding formula. According to federal aid regulations, Sport Fish Restoration grants, which funds boating access sites, can only be approved if they primarily benefit the recreational boating and sport fishing public. 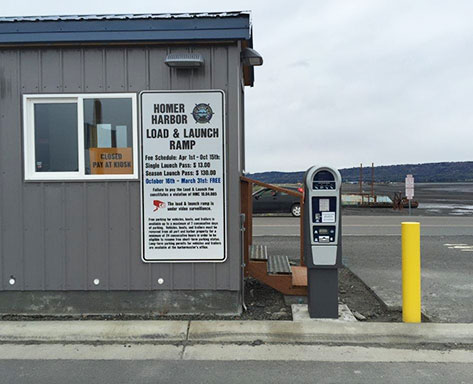 Improvements to the Homer boat harbor include a new fee booth.

In Alaska, a minimum of 15% of the state’s allocation of Dingell-Johnson funds must be used for recreational power boating access projects. More specifically, the funds must be used to construct, renovate, improve, or maintain access for marine or freshwater gasoline powered boats, under 26 feet in length. For example, projects may include boat launch ramps, boat docking facilities, fish cleaning tables, parking areas, restrooms, and development for power boat use, and related support facilities. Each eligible boating access project can use up to 75% of these federal excise dollars, matched by state and local non-federal funds. Over the last 30 years, over 160 power boating access projects have been completed throughout the state.

Power boat access to the marine waters around Juneau was dramatically improved when the new Don D. Statter Memorial Boat Harbor launch ramp project was completed in 2017. Located in Auke Bay, approximately 12 miles north of Juneau, the old Statter launch ramp was built in 1986 and was in desperate need of improvements because it had exceeded its useful life. Over the years, the old launch ramp had deteriorated to the point that numerous safety issues were affecting its use. These issues included, launch and load activities were no longer functional during low-tides; unsafe pedestrian access and traffic congestion; insufficient parking; and, the site did not meet Americans with Disabilities Act (ADA) standards. 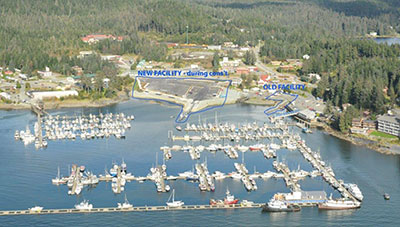 Working collaboratively, the Division of Sport Fish provided federal funds from their Recreational Boating and Angler Access Program, while the City and Borough of Juneau provided the non-federal funds necessary to construct a new boating access site. The new facility, located about 500 feet from the old launch, provided longer ramp lanes (all tide stage launching and retrieving), increased parking and safer traffic flow (both vehicle and pedestrian). All improvements now meet the Americans with Disabilities Act (ADA) standards and are barrier free. Ultimately, recreational power boaters are now provided with a safer, more functional, and ADA accessible launch facility that also provides recreational amenities for walkers and others who visit the site. Overall, improvements will help decrease long-term maintenance costs to the city and Borough and provide for more efficient site operation.

In 2017, the new Don D. Statter Memorial Boat Harbor launch project was the recipient of a prestigious Outstanding Project award from the States Organization for Boating Access.

Completed in 2016, the Homer Harbor Boat Launch Ramp Renovation project was undertaken to upgrade the harbor launch and load facilities that had exceeded its useful life. Located near the end of the Homer Spit, the existing boat launch had been in use since the 1980’s, and over the years the harsh saltwater conditions had taken its toll on the cement ramp planks and the boardwalk floats. The old concrete ramps were extremely hard on both vehicles and boat trailers due to exposed rebar and failing concrete planks. 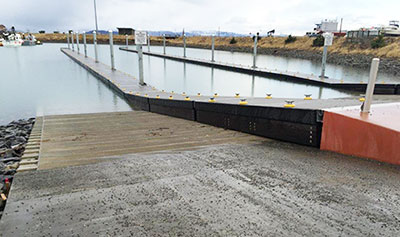 The Division of Sport Fish partnered with the City of Homer, Port and Harbor Department to ensure adequate federal and non-federal funding was secured to undertake such a large renovation. Ultimately, the harbor launch site was upgraded to include five new ramp lanes; two new boarding floats; new lighting; security cameras; fee collection booth; and, an electric card-reader for launch/parking fee payments. All improvements meet Americans with Disabilities Act (ADA) standards, resulting in a facility that is barrier-free and easier to use. As a city-owned facility, the Port and Harbor staff were keenly interested in using materials that would decrease long-term maintenance costs to the city. The new facility has provided quicker, safer, and more efficient boat loading and launching for all users.

Prior to the completion of the Tanana Lakes boat launch project in 2014, the only power boat access to the Tanana River near Fairbanks was about 7 miles downstream of the site of the new Tanana Lakes boat launch. The original boat launch was very difficult to use at certain river levels due to it being an unimproved area along the river bank. Limited parking, and heavy use by recreational users made this a priority project for the Division of Sport Fish and the Fairbanks North Star Borough.

The borough and division partnered to make the new boat launch facility a reality by jointly funding the project, with the division providing 75% of the federal funding, and the borough providing the required 25% non-federal match. 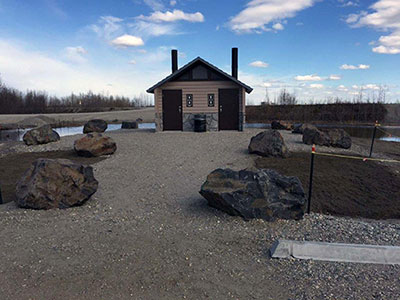 Tanana Lakes Recreation Area after improvements. The new boat launch facility provides a two-lane concrete boat launch; parking for up to 100 vehicles and trailers; a day use area with amenities such as picnic tables and fire rings; a double vault latrine; and a connecting channel between the Tanana River and Tanana Lake to provide river access.

Located within 2.5 miles of downtown Fairbanks, the Tanana Lakes Recreation Area that is owned and managed by the borough, provides recreational opportunities for residents throughout the greater Fairbanks/North Pole area. The new boat launch facility provides a two-lane concrete boat launch; an Americans with Disabilities compliant boarding float; parking for up to 100 vehicles and trailers; a day use area with amenities such as picnic tables and fire rings; a double vault latrine; and a connecting channel between the Tanana River and Tanana Lake to provide river access.

How Are New Projects Identified?

Each year, regional Area Management Biologist or Access Program staff review the access needs in their respective areas, in part by relying on input from the public, and identify priority projects. Then, the local biologist submits a list of project ideas to the Access Program Manager, who reviews and researches the projects to ensure adherence to program regulations and Division of Sport Fish Access Program guidelines. Project ideas are ranked using established criteria, and are then prioritized based on project validity, need, and funding availability. If you have a suggestion for additional access projects in your area, contact your local Division of Sport Fish Area Management Biologist or regional Access Coordinator.

Terry Thompson is the Statewide Communications and Outreach Coordinator for the Division of Sport Fish based in Homer, Alaska.