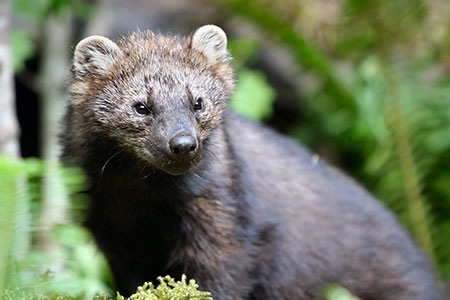 Fisher are a new species in northern Southeast Alaska. And, they are here to stay.

That’s why biologists with the Alaska Department of Fish and Game launched a new study that began Jan. 15, 2018, to learn roughly how many fisher are now calling the Juneau area home. That study has already proved successful.

The project is still in its early phase, but Caitlin Kupferman, a master’s student from the University of Idaho who is heading up the project, has already captured at least one fisher on camera at one of her sites. The series of photos proves that these members of the weasel family are, indeed, in the Juneau area.

Historically, fisher — a cousin to the marten with a larger, stockier body — have been transients to the Juneau area. Like coyotes, they come and go, but have never seemed to have an established population. Reports of fisher in the area began surfacing in the 1990s and since then have persisted.

Anthony Crupi, a wildlife biologist with the ADF&G’s Division of Wildlife Conservation, said, “We believe fisher could have an established population at this point because we are seeing both males and females. But, we don’t have any idea about their population dynamics.”

Fisher are one of the elusive carnivores that roam the forests of Northern America and, like the wolverine, they are hard to study since they are rarely seen. The males and females Crupi does have data on were turned into the department by trappers who, while targeting marten, accidentally caught fisher.

“We weren’t really learning anything about the fisher, except maybe where they were caught,” Crupi said. “And maybe people weren’t even turning them in; we really didn’t know.”

Hence, the need for some research. But before a study could be launched, the Board of Game — the governing body that conserves and develops Alaska’s wildlife resources — needed to approve the listing of fisher as a furbearer species, and then there had to be a season and bag limit for the mammal. Once that was complete (currently, the season mimics that of other low density carnivores, such as lynx) there could be a sealing requirement established. That means every animal trapped in the area must be presented to the department to be sealed. The sealing process is simple: biologists examine the hide of the animal, ask questions about where it was harvested, note gender, try to establish an approximate age, take notes on health and take samples if possible. Crupi said 10 fisher have been sealed in Juneau in the last three years. 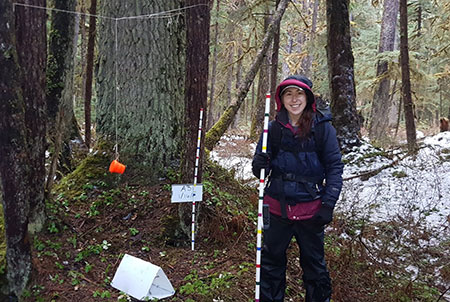 Caitlin Kupferman at one of the study sites near Juneau. The triangular shaped "hut" contains small wire brushes (typically used for cleaning a gun) to snag small tufts of hair from an animal that enters to investigate an attractant in the back. The orange container holds a scent lure to help draw an animal in.

“Half have been caught in the Taku River corridor, so we assume that’s the way they are transiting into the Juneau area,” he said.

The new study titled, “Fisher colonization and competition with marten in Southeast Alaska,” is headed up by Kupferman. The goal of the project she said is to get data “on fisher occupancy of the region and their density.” If she’s lucky, Kupferman hopes to also examine their competition with marten, depending on what information is collected.

“The results from the project will be important for species management in the future,” Kupferman said. “Especially because it is a rare, elusive carnivore.”

Plus, she said, there’s the potential for others to expand on the research, particularly if it were modified into a monitoring protocol, and those results could be used to develop a management plan. Kupferman also sees potential for “genetic connectivity.” Because of the way the study is designed, hair samples are obtained. The hair follicle provides DNA. 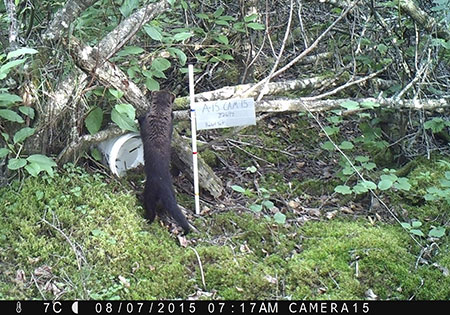 A fisher investigates a study site.

Kupferman said if someone wanted to actually analyze how related the Juneau population is to the British Columbia population, they could. “I think this current project will provide good baseline data for other projects in the future,” she said.

Collecting hair is a big part of the project, as is taking photos.

The team’s methods are simple: They’ve set up a study area just north of Juneau and every 3.5 kilometers or so they have a site that features two triangle-shaped “huts” spaced about 350 meters apart. Each trap holds three gun cleaning brushes. In the back of the tiny hut hangs bait — typically a piece of meat, like beaver. A scent lure, which is suspended above the trap and used to attract the animal, works in tandem with the bait and encourages fisher to enter the hut and brush against the course brushes to get at the meat. In doing so, the brushes snag some fur along the way. At the same site is one or more trail cameras, which are motion-triggered. There is also a small measuring stick, situated upright against a tree or snag, with lure at the top. Kupferman and Crupi hope to get approximate measurements of animals as they reach for the lure; this will help determine if they are observing a fisher, or their smaller look-alike counterpart, the marten.

And size does make a difference. Fisher are more adept at capturing larger prey like snowshoe hare and, their specialty, porcupine. They are also a known competitor with marten for the same prey, such as squirrels, voles, and small- to medium-sized birds. The extra heft of a fisher compared to a marten does not play in favor for the fisher in winter; they sink in deep snow, whereas marten have a much easier time staying afloat. Hence, fisher prefer very specific habitats. They like forests with a thick canopy cover — one that will keep deep snow at bay — and lots of roots and logs for resting and denning. 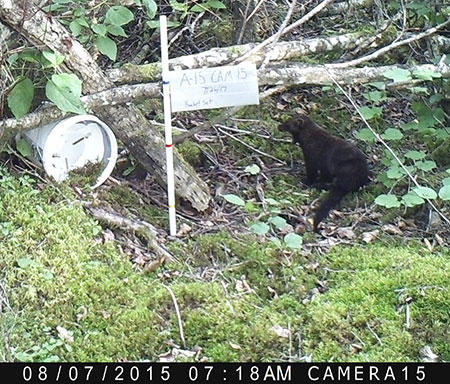 The same fisher one minute later. A small wire brush can be seen on the inside of the bucket-style set.

Fisher are also capable of traveling long distances, and individuals have been known to cover more than 55 miles over the course of three days. Spring is the time for mating and for the females to give birth. Mating happens between March and May, but implantation of fertilized eggs in the uterus is delayed until the following winter - January to early April. Gestation is then about 30 days, but the total period of pregnancy is roughly one year. Females will then mate about 10 days after giving birth. In short, female fisher are pregnant almost continuously.

Fisher litters consist of up to about six young, but the average size is about three. The newborns weigh just over an ounce and are blind and nearly hairless. They first open their eyes at seven weeks, and don’t walk until they are eight to nine weeks old. Weaning happens around 10 weeks, or sooner, and they are on their own by the fifth month of life. By the age of one or two, fisher are sexually mature, and these carnivores live to be about 10 years old.

In contrast to other projects, Crupi said the fisher project is not too different at its core from other wildlife studies.

“This project is not too dissimilar from brown bear or wolf research that relies on hair and mark-recapture methods to establish a population estimate,” Crupi said. “But, if we don’t’ have enough hair, there’s the occupancy analysis where you can just take the individual photos of each animal at each cell.”

Crupi said the sites range from sea level to about 1,500 feet. When the team started setting out the sampling sites there was no snow, so travel was easy. But now, he said, with deeper snow, things have gotten a little more complicated and challenging. He estimates Kupferman has logged more than 200 miles on foot so far checking the sites, and with the project scheduled to go until April 15, there’s sure to be more miles ahead. And, they’ve had a few surprises in some of the most remote areas. 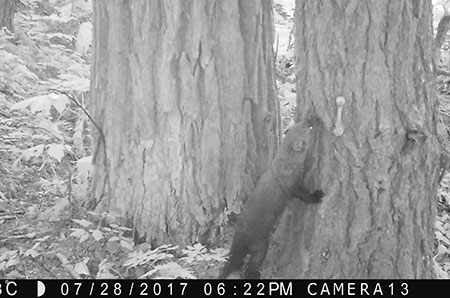 A fisher investigates a chicken bone set up as an attractant. In low light, the motion-triggered trail camera uses infra-red LEDs, which render a black and white image.

“We’ve had several wolverines,” Crupi said. “We know wolverines use these similar areas. It’s really fascinating that they’re there and revisiting.”

And then there has been the occasional squirrel, deer, porcupine, ermine and, of course, fisher.

So far, data is coming in and once April has come and gone, the grand task of analyzing data will fall to Kupferman, who will do all the DNA analysis herself.

Kupferman connected with the project via her advisor, Sophie Gilbert, who completed her PhD studying Sitka black-tailed deer fawns on Prince of Wales Island. Kupferman, who has a background doing carnivore research across the United States — from mountain lions to red foxes, to bats and small mammals — is a perfect fit for the project, Crupi said. Even Kupferman admitted she has a fascination with meat eating mammals.

“I have a particular interest in carnivores,” she said. “I think it’s because they tend to be polarizing; people either love them or they hate them. Either way, they’re pretty charismatic.”

Abby Lowell is an Education Associate with the Division of Wildlife and is based in Juneau. She helps organize the annual Becoming an Outdoors Woman workshop, and has written about mountain goats, bats, wildlife diseases, and outdoor education opportunities for Alaskans.