A New Alaska Hunter
Gets a Little Help From His Friend 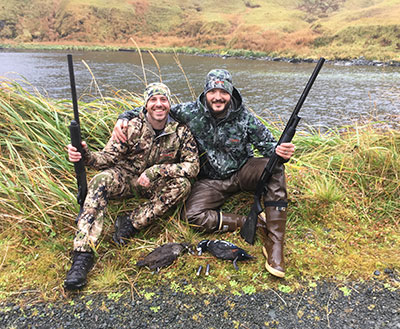 Steven and Stephen on Adak.

It was a cool early October day in the middle of nowhere, even by Alaska standards. A group of several friends and I were in Adak, Alaska, an island near the western end of the Aleutian chain, 1,200 miles southwest of Anchorage. We were on a mission to bring home some organic, free range, GMO free, delicious caribou for the freezer -- and perhaps a few sea ducks.

My friend Steven was crouching in the tall grass nearby, his eyes trained on a few harlequins headed our way, flying just above the deck. As the birds approached, his grin got wider and we both started bringing our shotguns up into shooting position. A few moments later we had our first pair in hand, a hen and a drake.

These were not the last ducks to fall that morning. For my friend, it was the first duck downed in his waterfowl career. On that same trip, he also took his first caribou. For me, it was most memorable because I got to share my passion for hunting and be a part of someone’s journey to increase their hunting experiences, and at the same time, contribute back to wildlife conservation. For those who don’t hunt, this might seem like a paradox. However, each year, hunters give back to conservation through the purchases they make on equipment, licenses, and gear through the Pittman Robertson Act. In 2016, that total was over 1.1 billion dollars. But the benefits of hunting are far reaching on a personal level as well - mental and physical health, a greater awareness of wildlife, and access to healthy protein are just a few that come to mind when I think about what hunting has done for my personal life. 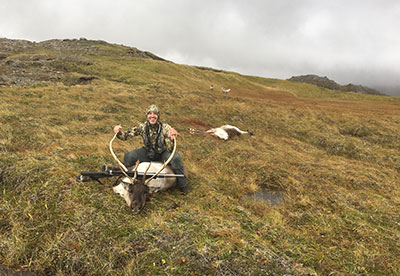 Steven Williams and his Adak caribou. Photo by Stephen Sowell.

Let’s backup a few months. My friend Steven had moved to Alaska a few years earlier. Although he had grown up in Idaho and had done a bit of big game hunting and dry fly fishing for trout, he hadn’t taken up some of the other hunting and fishing opportunities that we are fortunate enough to partake in as Alaskans. Hunting waterfowl, big game, grouse, ptarmigan, and fishing for salmon and steelhead, to name just a few.

In January I had asked him if he wanted to come over and tie some flies for salmon and Dolly Varden, and he responded, “No way, that’s way too hard! I could never learn to do that.” In his mind, tying flies was solely for those of the artistic bent who had 20-20 vision and a trunk load of supplies. After a bit of coaxing, me providing some supplies, an extra vise, and more than a little friendly ribbing, Steven came over and was soon not only matching a couple commercially sourced examples, he was improvising and going out on a limb to create his own angling masterpiece. Let’s just say that the final straw in his willingness to tie flies was perhaps inspired by observing my lack of artistic ability (my stick figures are worse than those drawn by my children) and yet somehow I managed to catch salmon each year on flies I had tied. A few months later he caught his first Dolly Varden and trout on those same flies that he tied. Later I heard him telling some mutual friends about how surprised he was that he could create beautiful and effective flies of his own that caught multiple fish and were far cheaper than commercially tied flies. 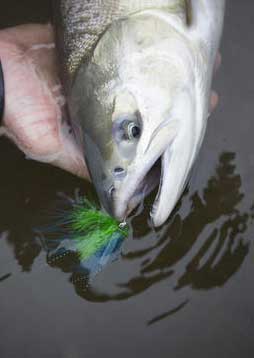 A chum salmon caught on an angler-tied fly. Photo (and fly) by Ryan Ragan.

The lesson that I began to learn was the importance of being a mentor. We all can identify someone who brought us up hunting, shooting, and angling. For me, I was lucky enough to have a fishing addict for a father and an avid hunting grandfather. However, some people aren’t fortunate enough to have a family member who can help guide them into a new sport; and often this leads to people having an interest but not access to the knowledge and experience necessary to learn and grow. 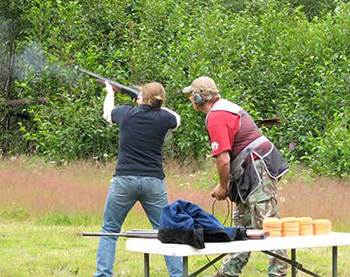 A participant in the Becoming an Outdoors Woman program learns to fire a shotgun in Juneau.

We usually think of youth benefitting from mentoring, but there are many adults eager to learn that would benefit from the guidance of a mentor as well. Reading “learn how to…” articles and watching You Tube videos is helpful, but hands-on learning is vital. Additionally, just because you have hunted for elk or whitetail deer doesn’t mean you feel comfortable duck hunting. You see, hunting especially is a multi-faceted sport that requires a variety of skills and knowledge.

I now have the privilege of working for the Alaska Department of Fish and Game’s Division of Wildlife Conservation as the “R3 Coordinator,” (recruitment, retention, & reactivation of hunters and shooting sports enthusiasts). Essentially, I get to be a part of sharing the beauty and benefits of participating in outdoor recreation with the public, and increase participation. Many people who consider taking on a new activity often feel intimidated or anxious. Whether it’s hunting, fishing, or underwater basket weaving, new activities require a person to learn and grow, and sometimes that is a little scary.

This is where Alaska Fish and Games comes in. We are here to help anyone who wants to develop their hunting and firearms skills. Fish and Game’s Hunter Information and Training (HIT) courses, Becoming an Outdoors Woman, Alaskans Afield, and other programs give the participant greater knowledge of the hunting culture, proper firearm handling skills, and awareness of wildlife conservation. Throughout the year, we offer a variety of hunter education courses, shooting clinics, and camps. It’s not just for kids either, there are programs for every age and skill level. I would encourage you to take a look at our website to learn more or send me an email and I will help you connect with resources and information to help you in your hunting and shooting activities. 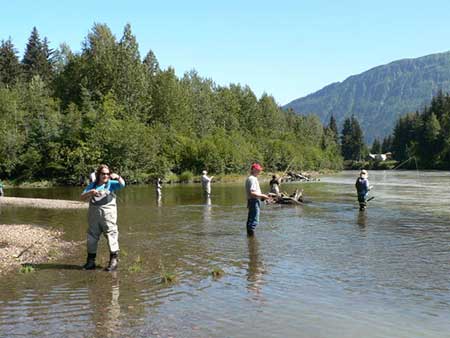 Participants in the ADF&G-sponsored Alaskans Afield program learn to fly fish at the confluence of the Medenhall River and Montana Creek in Juneau. Photo by Tennie Bentz

More information is available about the programs that Fish and Game offers that can assist you in your hunting and shooting sport activities, and you can reach me at Stephen.Sowell@alaska.gov.

Stephen Sowell is a Program Coordinator for the Alaska Department of Fish and Game’s Wildlife Conservation Division.