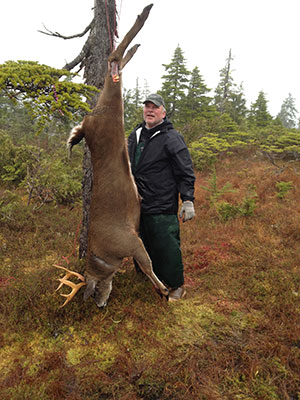 As a fishery biologist, I’m not generally expected to teach middle school. But as a new volunteer hunter education instructor, I found myself nervously walking into a Juneau school, ready to face a room full of sixth graders.

I volunteered to teach the Field Care of Game portion, since that was a familiar topic to me. Of course I was petrified to stand in front of a class of sixth graders. I wondered: would they behave? Be engaged in the topic? Would they like the videos and slides of game handling and processing I’d put together? It’s one thing speaking to a crowd of adults or parents and children. It’s another to speak to a pile of sixth graders for an hour and a half.

The sixth graders in Juneau’s two middle schools have the opportunity to take a hunter education certification course each year. Volunteer instructors from what’s officially called the ADF&G “Hunter Information and Training” Program (or “HIT” for short) teach the course. Students who pass the written exam and shooting proficiency test receive their hunter education card, which is valid for life and accepted in all 50 states.

The middle school program dates back to about 2001, when volunteer Ken Coate organized the first classes in Juneau. The course materials are paid for by the non-profit Territorial Sportsman Association and ADF&G runs the shooting proficiency and field courses at the indoor shooting range.

The middle school teachers integrate course materials into their classroom instruction prior to hunter education week. A team of instructors then comes to the school to teach Firearms Handling, Firearm Safety, Game Care, Survival, History, and Wildlife Management.

My nephews and nieces inspired me to become a volunteer hunter education instructor. I had been taking my nephew hunting and I had required him to get his hunter education certification card, even though he didn’t need to have it for the areas where we hunt for deer. On his first trip, I reviewed some of the safety aspects of hunting. Then he went target shooting with my sister in law and a family friend. Both of them are long time volunteer hunter education instructors and knew exactly how to teach a new shooter and instill safe gun handling as standard operating procedure. I realized these two were comfortable teaching a new hunter, and seeing as I had more nephews and nieces to teach, it would be a good idea to become a volunteer instructor as well. ADF&G provides regular trainings to certify volunteer instructors to teach hunter education, bowhunter education, muzzleloader education, and crossbow education courses across the state, and I took the next course offered in Juneau. 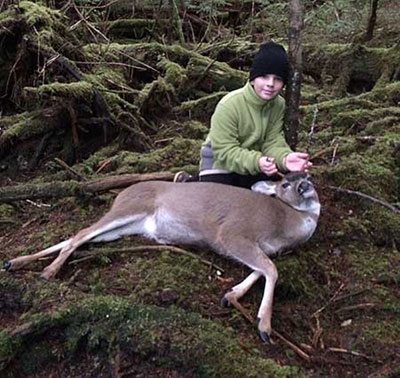 Mentoring is an important aspect of learning to hunt, and the author's nephew John enjoys a successful day in the field. Mark Stopha photo.

When it was my turn to teach, I arrived early to the classroom to make sure the computer worked for the video screen. The teachers immediately put me at ease. They helped me get everything set up and let me know how much they enjoyed hunter education week and how excited the children get every year for this week. The program has been in Juneau so long it’s something a fifth grader now looks forward to when they move on to sixth grade.

At the completion of the classroom training, students complete a field training course. Instructors lead students through the forest, (equipped with non-functioning firearms) where silhouettes of Alaska animals are placed in a variety of positions and students apply what they learned to determine if the shot is safe to take. Is the animal facing in a direction for a clean kill? Do I know what’s behind my target? Instructors or mannequins dressed in camouflage may be concealed near the silhouettes to provide more real-world situations the young hunters must consider to be a safe hunter. 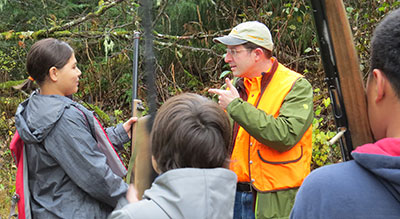 The students practice safe firearm handling when entering and exiting a boat, the transportation mode which many will use to get to their hunting grounds for deer, moose, ducks, goat, bear and grouse. Then the students practice standing three abreast and practice their safe zones of shooting as if out on a ptarmigan hunt or in a duck blind.

The students’ final part of the field day is shooting a .22 or air rifle at the ADF&G indoor range. Students practice shooting in the positions they learned with the non-functional firearms in the classroom, and then take a shooting proficiency test.

The students taking the course were enthusiastic but serious. Many of them know a Juneau high school student who died in 2016 retrieving a loaded shotgun from a vehicle to go duck hunting with his friends.

At the end of my class, I asked students how many had been hunting before. About a quarter of hands went up. When I asked how many had eaten wild game, all the hands went up. That response is encouraging. Fishing and hunting where I grew up back east has become more about winning a tournament or an antler score than harvesting food. It’s refreshing to see kids here learning at a young age to enjoy eating the wild fish and game they gather with their families and friends. Some of the kids may never harvest an animal. The hunter education certification course teaches them that hunting – especially big game hunting – involves a lot more than shooting. It requires caring for the meat once the animal is down, transporting the meat home, and then butchering and packaging the meat for preservation until consumption. Everyone in the family can participate. In addition, knowing the rules of safe firearm handling are important anywhere firearms are around, which is lots of places in Alaska - at home, at their friend’s house, in the car, or in the duck blind. 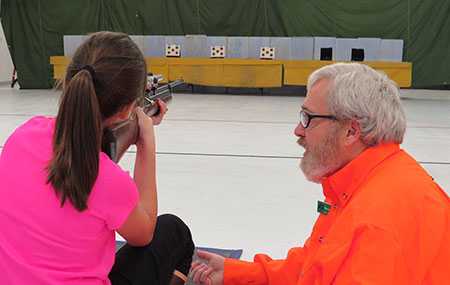 Shooting proficiency with an air rifle at the Juneau range. Jeff Jemison photo.

In the fall of 2017, Floyd Dryden Middle School took a new approach, spreading the instruction out over the semester rather than concentrating it into a couple of weeks. The strong partnership between the Juneau middle schools, parents and students, and the ADF&G hunter education program is providing useful, real-life skills to sixth graders that they can take with them the rest of their lives. And hopefully it’s making it safer in the woods for all of us that hunt and hike here.

To learn more about ADF&G’s Hunter Information & Training Program or to sign up for a hunter education certification course in Alaska, visit www.huntereducation.alaska.gov or contact (907) 267-2373 for additional information.

Mark Stopha is a former salmon troller and direct marketer. He’s currently a fishery biologist for ADF&G in Juneau. He's written about fish care in "Caring for your catch," marten trapping, and coho salmon research, among other topics, for Alaska Fish and Wildlife News