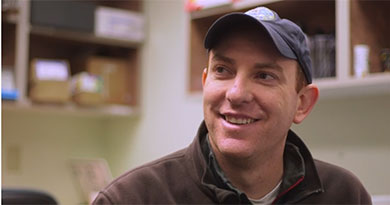 Putting a tracking device on alligators is a challenge, but it has some advantages over collaring wolverines.

Wildlife biologist Dave Saalfeld earned his Ph.D. working with alligators in East Texas, and he’s now applying his expertise in spatial ecology and population dynamics to moose, wolves, black bears and wolverines in Alaska. He’s been a biologist with Fish and Game since 2013, working in Anchorage on a variety of projects. He expects to become more “furbearer-centric” as he transitions into the furbearer research biologist position for the Division of Wildlife Conservation.

“Right now I’m still finishing up a few projects I was working on before, a moose project, a black bear project, and I have a wolf project with Jeff Selinger on the Kenai,” he said.

Selinger and Saalfeld collared 18 wolves on the Kenai in February of 2017, and they plan to collar more wolves this winter. Selinger, the area biologist for the Kenai Peninsula, is based in Soldotna. He and Saalfeld hope to learn how many wolf packs are in the area, how many wolves are in those packs, and better understand their dispersal through the Kenai.

“We have 15 collars on the air now. These are Iridium collars, so I get an email every two days with the wolves’ most recent location,” Saalfeld said. “It’s a type of satellite collar that uses Iridium satellites to transmit the data. The sheer number of points you can get is incredible.”

A collared wolf’s location is recorded every three-and-a-half hours. That’s a far cry from the devices biologists used to work with to locate and track animals – relatively heavy VHF transmitters that simply broadcast a radio signal. “You’d get maybe a couple points a day because you’d have to track each animal and triangulate,” Saalfeld said. “These collars will last three years. They’re light, too, lighter and they last longer.” 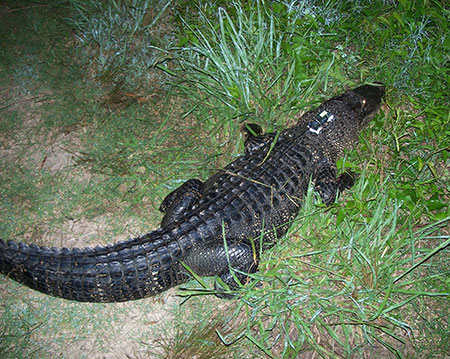 An alligator equipped with a VHF radio, enabling researchers to locate the animal. This animal shows a bit of the "eyeshine" that helps researchers find the animals at night. Like many animals, alligators have a reflective tapetum layer in their eye that enhances their ability to see at night.

The VHF radios Saalfeld used to track alligators were not attached to a collar, but directly to the animal. A hole was drilled through the bony scales on the back of the alligator’s neck, (called scutes, which do not have blood flow) and the device was wired in place with some epoxy underneath.

The captures were done in the dark at night - for several reasons.

“They are a lot more energetic during the day,” Saalfeld said. “At night you can find them by their eye shine – their eyes shine red in the dark, and that’s how you could pick them up in the vegetation. If they were four feet and under you just grab them with your hands and pull them in the boat. That sounds like a big alligator, but a lot of that is tail.”

“The bigger ones, anything over about eight feet, they wouldn’t let you get close, they just duck into the vegetation and you’d never see them again,” he said.

Saalfeld and his colleagues caught more than a thousand alligators over a three year period in rivers, oxbows, lakes and swamps around the Texas/Louisiana border. They learned about their movements, diet, distribution, population dynamics, and nest site selection. Although East Texas is fairly urbanized, the alligators find protected spots near water to nest. A big issue was human-caused fluctuations in water levels, especially raising water levels that flooded nests. 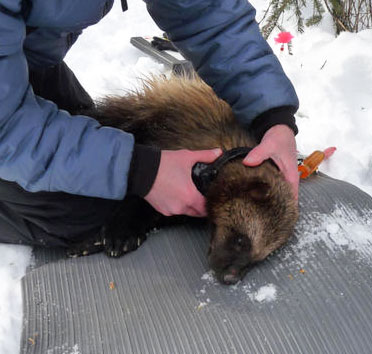 Howard Golden and Mike Harrington collar a wolverine. Saalfeld is analyzing the data from the wolverine research project to learn more about wolverines in Southcentral Alaska.

What’s the advantage of catching alligators over wolverines? Their abundance, Saalfeld said. Between 2007 and 2014, Alaska researchers Howard Golden and Mike Harrington spent months working to find and catch about a dozen wolverines.

“We could catch 20 alligators in a night, no problem,” Saalfeld said. “We tagged a lot of alligators.”

Saalfeld has inherited that wolverine research project from his predecessor Howard Golden, the former furbearer biologist who now serves as the regional supervisor for Southcentral Alaska. Saalfeld is analyzing the data provided by 10 wolverines equipped with GPS collars, which tracked and recorded their movements. He’ll be looking at their movement patterns and the density of wolverines on the Southcentral landscape.

Saalfeld’s wife Sarah is also a biologist, working with shorebirds for the US Fish and Wildlife Service. It was her job that initially brought them to Alaska. Saalfeld has worked with birds himself, as well as fish (his master’s degree is in fisheries) and whitetail deer.

Saalfeld helped with the whitetail deer project, a fawn survival study, in the Auburn, Alabama area. Pregnant does were equipped with vaginal transmitters that sent a signal to biologists when they gave birth, enabling the researchers to quickly locate the mother and baby. Fawns were collared and tracked to determine causes of mortality – which turned out to be mostly coyotes, and some bobcats. Alaska biologists have done similar work on black-tailed deer and moose. 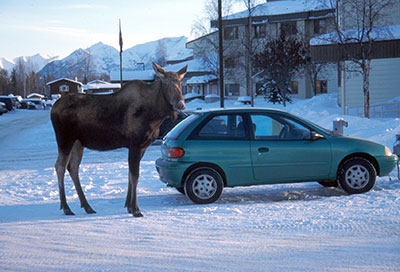 Moose, the largest member of the deer family, are part of Saalfeld’s current suite of projects. He’s working with Sean Farley, Dave Battle and Cory Stantorf to better understand moose in the urban Anchorage area. The project involves collecting DNA samples to determine the relatedness between animals, the ratio of bulls to cows, moose numbers and the size of the overall population in the Anchorage area. In late February, biologists will be reaching out to Anchorage residents to help report moose in their neighborhoods.

Saalfeld is looking forward to expanding wolf research in Southcentral Alaska, to better understand wolf numbers, movements, energetics and pack dynamics. He plans to look at lynx on the Kenai – their movements and numbers in relation to the hare population cycle, and to gather information that will help fine-tune trapping seasons and harvest tracking.

Saalfeld enjoys the range of ongoing and upcoming projects. “There are so many great questions, so many species you can work on, and I like the diversity,” he said.

Wolverines: Behind the Myth – more on Harrington and Golden’s wolverine captures and research