Abandoned and Derelict Vessels in Alaska 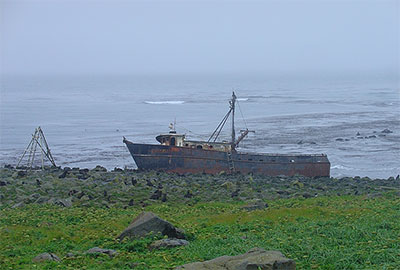 Abandoned and derelict vessels (ADV) are an increasing problem in Alaska’s waters and tidelands and we need a solution. Due to an aging fleet and the expense of properly disposing of a boat that has outlived its useful life, ADV are becoming all too common and our state has limited infrastructure to correct this growing problem. ADV create environmental and navigation hazards, as well as potentially interfering with commercial, recreational, subsistence, and personal use fisheries by introducing pollutants and trash, snagging gear, and blocking travel. They can be an eyesore for both residents and visitors to the state.

Several news articles in the past few years have shown some of these issues playing out in real life: Steamboat Slough near Bethel has been a vessel dumping ground for years, two World War II-era tugs in Adak broke loose in a storm and the pollutants were removed but the derelict vessels are still there, and the City of Unalaska is concerned about the F/V Akutan becoming the next ADV.

What’s wrong with the status quo?

The Abandoned and Derelict Vessels Act AS 30.30. provides a framework for defining when a vessel is abandoned or derelict, who can take possession of it, owner notification, and auction, sale, and proceeds disposition. The National Oceanic and Atmospheric Administration’s Marine Debris Program prepared a State of Alaska ADV Legislative and Administrative Review which summarizes the various legal authorities the state has pertaining to ADV. A recent U.S. Government Accountability Office report on ADV has a good overview of federal authorities and actions. There are several shortcomings associated with existing ADV legislation, including difficulties tracking down and notifying the legal owner of a vessel, cumbersome impoundment and due process laws, and a lack of funding for removal and enforcement. It sounds like a no-brainer for the state to take possession of ADV, sell them at auction, and fund a state program to remove more ADV, but the vast majority of ADV are in such disrepair they can’t be sold for a profit, and whoever takes possession of an ADV becomes legally responsible for its disposal. 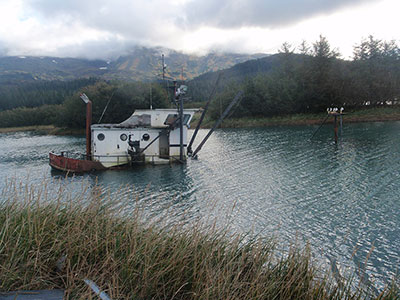 Vessels are often abandoned because responsible disposal is logistically difficult and expensive due to the distance from necessary support facilities like shipbreakers and suitable solid waste disposal facilities. It is often cheaper (or perceived to be cheaper) to walk away from a vessel than it is to properly dispose of it. Once a vessel sinks, the price tag for removal skyrockets, which typically makes salvage operations cost prohibitive for agencies, communities, businesses, and individuals. Even insured vessels with a responsible owner often don’t have the coverage needed for the expense of refloating, towing, dismantling, and properly disposing of a vessel.

The Alaska Department of Natural Resources (ADNR) manages state tidelands and submerged lands, where many ADV ultimately end up. ADNR can be delegated authority under AS 30.30 to seize ADV on state managed lands, but taking ownership of a vessel without any funding to pay for its removal and disposal does nothing to solve the problem.

If a vessel is in imminent danger of sinking or otherwise releasing pollutants to the environment, and the responsible party will not take appropriate measures, funding mechanisms are available to remove the pollutants and prevent or minimize environmental impacts from an oil spill, such as the U.S. Coast Guard’s Oil Spill Liability Trust Fund and the Alaska Department of Environmental Conservation’s Response Fund. However, this funding is limited to removing the pollutants, and cannot be used for the salvage, towing, or disposal of a vessel once the pollutants have been removed.

ADV are a complex issue in a state with over 33,000 miles of coastline and a strong focus on individual rights. In early 2014, an ad-hoc Abandoned and Derelict Vessels Task Force composed of multiple state and federal agencies, municipalities, and other interested parties came together with the intention of seeking out possible solutions before Alaska’s ADV situation gets worse. The task force was facilitated by Alaska Clean Harbors with support from the nonprofit Cook Inletkeeper and legal support from the law firm Birch Horton Bittner and Cherot. The Division of Habitat represented ADF&G on this task force, which met several times a year between 2014 and 2016. The task force spent considerable time reviewing case studies as a basis to evaluate the cause of ADV in Alaska; discussing the various state, federal, and municipal authorities and individual rights; and reviewing multiple state programs that have been developed nationwide to deal with ADV. 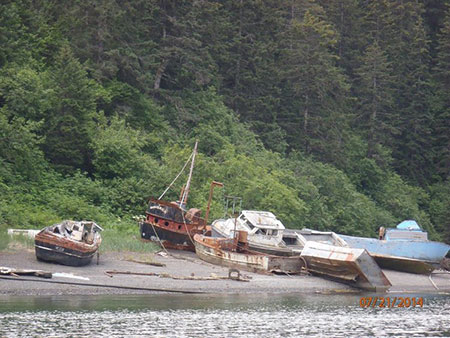 One of the results of these meetings was the task force developing a joint agency Vessel of Concern Reporting Form as a way to identify individual ADV and to help characterize this problem statewide. ADNR offered to retain these forms with the intent to compile the information in a database and online mapper that multiple agencies can access, but the latter efforts have been hampered by a lack of funding and staff time. Alaska’s size can appear to minimize our ADV problem, and a database will provide a means to track, monitor, and quantify them statewide. Anyone can fill out and submit this form to ADNR. As folks head into the field next season for work or recreation, please take the Vessel of Concern form with you in case you encounter one.

In 2016, State of Alaska task force members focused efforts on proposing meaningful legislation that would support ADV prevention and removal efforts. This resulted in a recommended repeal and reenactment of AS 30.30. to include articles requiring vessel registration, titles, and associated fees: enhancing impoundment and enforcement authority; creating a Derelict Vessel Program and Fund; and redefining “derelict” vessel to include abandonment.

In March, Senator Peter Micciche introduced the task force’s recommendation as Senate Bill 92, which was referred to the Resources and Finance Committees. The Senate Resources Standing Committee received public testimony on this bill, but it was held in committee at the end of the session. As the legislature comes to session in January, you can track this bill through the Alaska State Legislature SB 92.

Jeanette Alas is a Habitat Biologist with the Alaska Department of Fish and Game’s Division of Habitat and is based in Anchorage. She represented ADF&G on the Abandoned and Derelict Vessel ad-hoc task force.