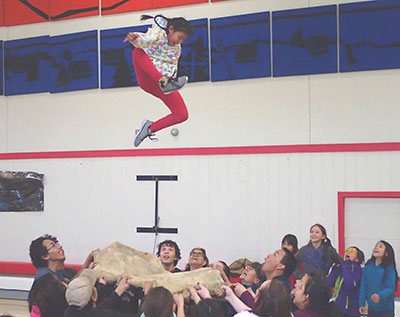 Note: Please refer to my previous AFWN article “Turning a Moose Hide Into Buckskin: Brain-Tanning Alaska Big-Game Animal Skins at Home” to better understand the details of what occurs in the story told here[i].

Fleshing, de-hairing, graining, stretching—these are the main tasks involved with tanning large-game skins that are generally so time consuming and exhausting that they keep many folks who have tried home skin tanning once from ever trying it again. Arguably, stretching, the final stage of tanning, which requires full commitment by the tanner to diligently stretch and work the skin almost non-stop until it dries, is the crux of the process. After the skin comes out of its tanning solution (made of brains or bark by anybody using only wild materials) in order for the tanning to work, to achieve a finished product that is soft and pliable enough to use for clothing or crafts, the skin must be vigorously stretched and worked until it dries. This is time consuming and requires full, in-the-moment commitment with little opportunity for extended rest.

What if I told you that there exists a very important, traditional method of stretching the skin from a large animal, such as a moose, elk, bison, or caribou, until it is soft, which has likely been used by indigenous hunting communities around the world for millennia, and makes this final, most arduous step in skin tanning not only monumentally easier, by engaging in an activity that is just plain, healthy fun, which brings entire families and communities together in a true event of delight?

If there was a way to make tanning a moose or caribou skin enormously easier than you might have thought, a way that does not require you to purchase any fancy technology or do anything extraordinary at all, would you be motivated to finally take care of that rolled-up, salted moose skin that has been forever destined to be stored in the rafters of your garage? If there was a way to turn the skin from this year’s harvest into a baby-soft panel of buckskin while getting the kids outside for the day, bringing them together with parents, grandparents, and friends, teaching them an ancestral wilderness skill and an ancient fine art, and through it all they will not complain about working but instead never stop laughing and asking to help, would you be motivated to do some skin tanning?

The author is wearing a black sweatshirt at the far right, Marylynne Kostik is seated at left.

Last spring, ADF&G Division of Subsistence Research Analyst Marylynne Kostick and I were invited by the Dena’ina Athabascan community of Nondalton, located near Lake Clark. The invitation was to help support a moose hide brain-tanning class at their annual Culture Week held at the local school. I had known for a long time that hide jumping, what is often called the “Eskimo Blanket Toss,” has its roots not just in a remarkable acrobatic activity but also in its practical application of the most efficient and enjoyable method of completing the final phase of skin tanning—rigorous stretching of the skin until it dries soft. In Nondalton, I finally had the chance to witness this important and longstanding, traditional method of skin stretching, when a few dozen children from the community spent four days fully participating in our ADF&G Division of Subsistence moose skin tanning workshop.

On the final day of Culture Week, after all of the initial skin processing steps had been completed by the community, Nondalton’s young children and teens assembled around the skin, and it was explained that to complete the tanning the skin must then be stretched until it was completely dry, that every fiber of the skin needed to be stretched and pulled repeatedly until there is no more wetness anywhere on the skin. We gathered in a circle, and all of the participants held the skin and began to pull on it in unison. As we began to stretch the skin, the student’s faces lit up in smiles. It was only a matter of seconds before one of the children yelled out, “I want to jump on the skin!”

“Yeah! Can we jump? Can we jump? I want to Jump!” Several other children joined the chorus. The adults and teachers concurred, and lifted a small girl onto the skin. As the people held tightly around the perimeter of the skin, they began pulling back and then letting the skin slack down. Pull, slack, pull, slack. At first, the small girl began to bounce, chuckling with each toss. As the momentum picked up, the force of each pull grew stronger and the girl began to bounce higher and higher. She yelled with delight each time she flew through the air, and everyone began roaring in elation, cheering her on. The kids each yelled, “My turn!” “My turn!” 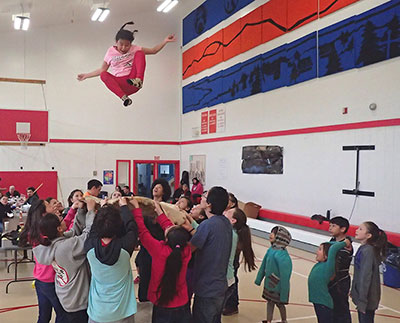 All were laughing nonstop and eager to jump on the skin. With every pull by the group, and every bounce of a child, the fibers of the moose skin stretched in every direction, and the friction of the pulling generated heat, which assisted in drying the skin as it stretched. Everyone in the room was awestruck. Elders and adults cheered and laughed ceaselessly. As the hours of the day went by, none of the kids wanted to stop jumping, and none of the adults or elders wanted to leave the scene. Even a few of the teachers were brave enough to get on the skin and be tossed in the air! We all wanted to pull on the skin and watch the children fly through the air. Naturally, the children began to master their hide jumping. Some did kicks and flips. They learned to time their jumps perfectly with the stretch of the hide so that it would launch them into the air as high as possible, sometimes double or more the height of the adults’ heads. As the hours went by, the people’s energy never diminished, and the laughing and smiling never stopped. The atmosphere was so powerful with interpersonal connections and happiness that tears were shed from many eyes, including my own.

As the day wound to a close, the skin was nearly dry and was soft like the fur of a beaver. Even then, the kids did not want to stop jumping. Teachers and elders tried to calm them down, and some of the kids did so by wrapping themselves up in the tanned skin. The very material that fanned their excitement now served to help them relax. To finalize Culture Week, Nondalton’s elders brought everyone into a talking circle where each person who attended the week’s activities told the group what they had learned and how they felt at the week’s end. Many important words were expressed in this circle. Taking the liberty to summarize the thoughts expressed in the talking circle, I offer the following: 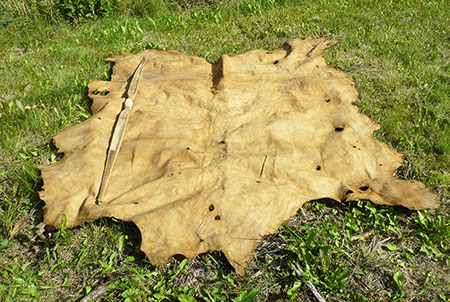 The skin of the four-leggeds brings together the people, unites them, and inspires the children to work hard, to always reach high, to float above the clouds. And the magic moment when the skin is finished teaches us that when we work together as a connected family or community, anything can be accomplished.

And in the words of a Nondalton elder: ‘This is how it was long ago. When there was something to be done everyone worked together, helped each other out. Like this moose skin tanning, it brought the people together and that’s so important.’

Subsistence is more than getting food from the land; it is also a binder of relationships and community. Earlier I wrote that physically active subsistence undertakings performed with children, with community, with the land, and with the wild materials that come from it, often amount to a state of bliss (see Ski Hunters of Siberia: Self-Reliance in Central Asia’s Altai Mountains), and it is this deeply meaningful and connected state that inspires future generations to continue to be engaged with what in the end are ultimately most the precious: sustainable wildlife, food, family, friends, community, and enduring land-based traditions.

This experience at Nondalton’s culture week was perhaps the most meaningful and rewarding of any I have been lucky to have as an ADF&G Subsistence Resource Specialist. Chi’nan (thank you), to the Nondalton Traditional Council, the Nondalton School, Karen Evanoff from the National Park Service, the children and teens of Nondalton, and the entire Nondalton community for your wonderful work and for allowing us from ADF&G to participate in Culture Week 2017.

James Van Lanen is a subsistence resource specialist with the Alaska Department of Fish and Game.