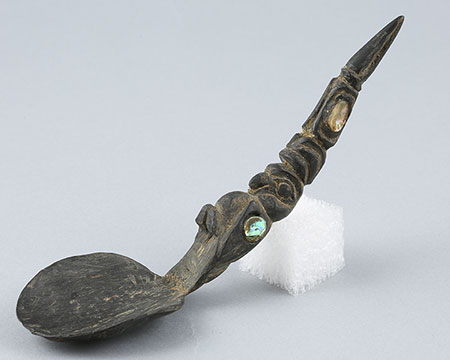 Davina Cole is the art project coordinator at Sealaska Heritage Institute, based in Juneau. She’s hoping to find mountain goat hunters that can provide goat horns for traditional carving.

“It’s a very endangered art form, and before it’s completely gone we are trying to stabilize it,” Cole said.

“In 2015 we brought 27 artists to Juneau for an artists’ gathering, these included skin sewers, carvers, weavers, and formline artists,” she said. “The top three most-endangered art forms were identified – the dugout canoe, goat horn spoons, and spruce basketry.”

As a part of the Jínéit Art Academy, SHI established an an mentor-apprentice program, and initiated a dugout canoe project in Sitka, followed by spruce root basketry classes in Juneau. The mountain goat horn spoon carving proved more difficult for a couple reasons: the material is hard to obtain, and very few artists know how to make horn spoons. 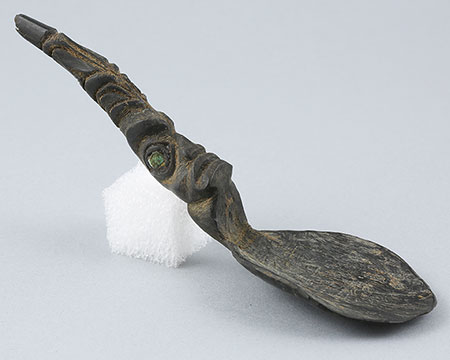 “We’re trying to find carvers and artists who can teach how to make them,” she said. “We’re also looking at using substitute horns from other animals to practice on if we need to.”

Horn is made of the protein keratin, the same material that makes fingernails, claws, hooves and hair. The horn is an outer layer with a core of bone. Horn is firmly attached to the core of live bone, but after an animal dies and begins to decay it loosens up and can be pulled free. When used for carving, the horn is pulled off, leaving the nub of bone core on the skull. The hollow horn is shaped and the handle carved with formline designs and sometimes inlaid as well.

“These are goat horn spoons, or goat horn with sheep horn,” she said. “Some are very intricate; they get an amazing amount of tiny detail on these horns, like little totem poles with inlay and everything. It’s mind boggling to figure out how they did that. Some can be more simple, but they tend to be on the detailed side.

Cole said she visited the Field Museum in Chicago and viewed the extensive carved horn spoon collection there in on display in their Native American area. She said that if people are interested in the Sealaska Heritage collection, a visit to view the collection can be arranged.

“If people are interested in seeing them, or doing a study session, they could set up an appointment with our archivist.”

The horn spoons were both ceremonial and utilitarian; as serving spoons, or smaller ones for eating. Tlingits also carved wooden spoons for everyday use. Cole said that traditionally when traveling to gatherings such as a payoff party, people brought their own utensils.

Taxidermist Jeff Kihlmire recommends an easy method of removing the horns from a fresh skull. He puts a little water in a bucket and puts a brick in it, and the skull sits on the brick. Cover the pot. “Bring water to a boil, and steam it for five minutes,” he said. “You don’t want to boil the skull or the horns, just steam it for five minutes and they pop right off. If not, give it another three minutes and try again.” 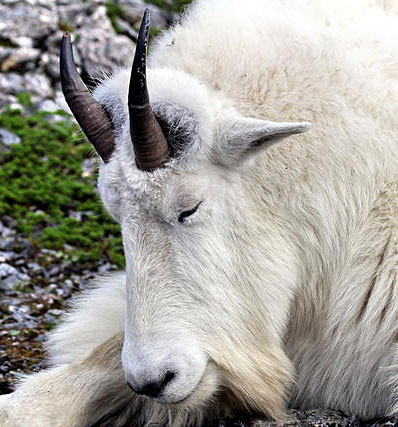 A goat hunter who has salvaged the edible meat from a goat can simply send the horns to Cole. As long as the horns are not attached to a skull, people are allowed to sell or purchase them. If the horns are attached to a skull, it may only be donated. A transfer of possession form can be used to document the transfer, but it’s not required if the meat has been salvaged. Horns can also be salvaged from skeletons found in the wild, or winter-killed animals found dead in the spring.

Sealaska Heritage Institute is a nonprofit dedicated to perpetuate and enhance the Tlingit, Haida, and Tsimshian cultures. Davina Cole can be reached at 105 South Seward Street, St. 201, Juneau, AK, 99801, or at 907-586-9230, or davina.cole@sealaska.com.