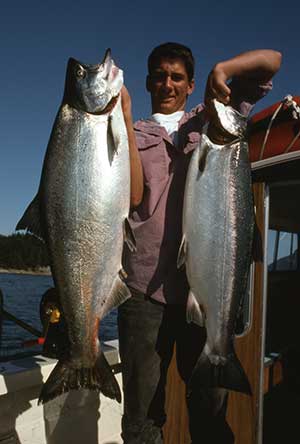 A charter-caught Chinook salmon on the left and a coho on the right.

By mid-afternoon, 12-year-old Natalie Marsh was clearly exhausted. She had been awake since 4:30 a.m., and fishing hard since 7 a.m. aboard the 25-foot charter boat Strike Zone.

A gale blasting in from the Aleutian Islands had whipped up the seas near the mouth of Resurrection Bay, and sharp winds and needling rains had reddened Natalie’s cheeks.

Yet rest was out of the question. My daughter was only one coho salmon short of her six-fish limit. And as far as she was concerned, long hours spent battling heaving seas and big, hard-running fish — including a 30-pound Chinook salmon that tested her grip and nearly spooled her reel — were simply part of her first Alaska coho angling adventure.

Even so, her eyelids were drooping when that final coho grabbed the bait 85 feet below the boat.

Natalie’s eyes popped open and she lunged to wrench her rod from its holder. As she tucked the butt under one arm and worked the reel with her free hand, the fish shot up and busted through a wall of whitecaps.

She leaned back against the fish, knees bent to absorb the bucking waves. The salmon ran on and I watched as her rod tip dropped lower, then lower still.

Natalie was worn out.

At that moment, I doubted she had the strength to boat her last coho. Her arms — unaccustomed to playing fish larger than 12-inch-long rainbow trout — were beat from wrestling in five previous cohos, nearly a dozen pink salmon, several three-foot-long sharks called dogfish and, of course, the thick-shouldered Chinook.

She wanted that coho. But it appeared she would need some help.

No sport fish thrills and tests Southcentral Alaska anglers like ocean-fresh coho salmon. Regionally called “silvers,” these powerful middleweights average 8-12 pounds apiece (though lunkers frequently exceed 20 pounds) and are savored for their vicious strikes, sizzling runs and spectacular, tumbling leaps. Their broad distribution from the saltwater ports of Valdez, Cordova, Whittier and Seward, to the dream streams of the Kenai Peninsula, Matanuska and Susitna valleys – even downtown Anchorage’s Ship Creek – places these hard-fighting fish among the most ubiquitous and popular of Southcentral’s five Pacific salmon species.

Considered by many the last, best salmon of the region’s bountiful fishing season, cohos generally leave coastal feeding areas in late summer for spawning beds in local rivers and streams. Even so, early fish can be caught among the fiords of Resurrection Bay outside of Seward beginning in late June and July. Elsewhere, in the saltwater out of Valdez and in the rivers and creeks of the Susitna Valley and Kenai Peninsula, coho fishing doesn’t really begin until late July and early August. Most coho runs taper by early September, though exceptions do occur. In the Kenai River, roughly a two- to three-hour drive south of Anchorage, ocean-bright fish are caught through October. 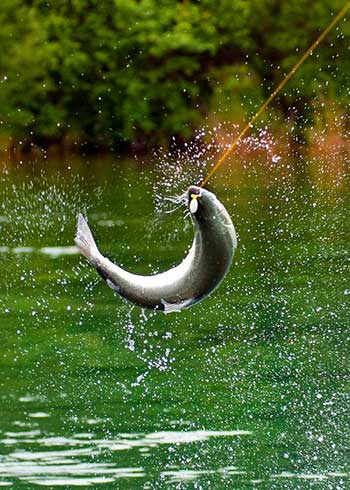 Cohos are drawn to flies, lures, and baits of nearly all kinds. They can be pushovers in saltwater for cut-plug herring, trolled or mooched, and are famous in the streams around Anchorage and beyond for aggressive streaks that send them out of their way for cured roe or stripped streamers.

Once, while fishing bait at the mouth of a Susitna River tributary in early August, I witnessed how bold these scrappy game fish can be. Frustrated at snagging the weedy bottom, I clipped a red bobber above my hook. The bobber allowed my bait to float above the weeds unhindered, and I caught a limit of bright cohos almost as quickly as I could reel them in. But I was surprised along the way by something else: For every fish I hooked, another would charge the surface to grab my bobber.

No one seems to know why coho salmon so willingly snap at baits, flies and lures in fresh water while en route to natal spawning beds. Feeding reflexes leftover from saltwater days, or territorial impulses associated with spawning are possibilities. Whatever the case, anglers seeking good fishing in Southcentral Alaska streams can increase their odds of success by remembering a couple of coho quirks.

First, determined as cohos are to reach spawning gravel, they are notorious dawdlers, drawn to sluggish creek mouths, stagnant backwaters, and deep pools. Fishing for them in fast, shallow water is rarely as effective as in the slower, deeper stuff.

Second, cohos are twilight creatures, far more apt to strike at dawn and dusk than midday. This is especially true on bright, sunny days. Early-rising anglers and those who arrive late and linger on the river until dark are often rewarded with the best fishing.

In saltwater, cohos are most frequently found in sheltered bays where baitfish congregate. Charter skippers watch their electronic fish finders in such places for “bait balls,” massive schools of needlefish and herring that amass to feed on plankton. Cohos fattening up for their arduous, one-way journeys up local spawning streams feed ravenously on these small fish. Individual salmon can pack on several pounds during the weeks of July and early August.

It was off the lee of Hive Island where salmon had gathered to feed on baitfish that my daughter, Natalie, encountered her sixth, and final, coho that day out of Seward. That fish wasn’t coming in easy as I approached to offer some fatherly coaching. 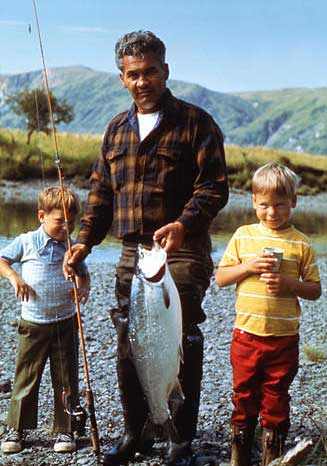 “My arms are too tired,” Natalie said, more to herself than to me.

I saw her grimace, her face florid as the fish peeled off more line.

Her lower lip popped out — a warning, I’d learned ever since she was an infant, that tears weren’t far away. Then she shook her head and continued reeling.

It was a long, slow grind, but Natalie was determined.

Several minutes later, as the seas continued to rock and the pewter skies to fret, she expertly led the fish into Mercer’s net, prompting a cheer from all aboard.

I learned more about my daughter that day than I did about fishing coho salmon. I realized that she’s far tougher than I ever imagined, an attribute likely inherited from her mother.

And she’s stubborn, too. Especially when it comes to fishing. But I couldn’t say where she gets that.

Ken Marsh is a public information officer for the Division of Wildlife Conservation. He makes his home in Anchorage.

Planning Your Trip: Timing and Location Are Key

Timing is the critical factor for anglers who fish for coho salmon in Southcentral Alaska. Some top coho venues and the best times to expect good fishing are listed below:

Meanwhile, coho fishing heats up in late-July on Bird Creek, roughly a 20-minute drive south of the city via the scenic Seward Highway. Both fisheries are tidal and fishing is best an hour or so before, during and after high tide. Both are also infamous for great expanses of slippery mud. Felt-bottomed wading soles — popular and effective on rocks and gravel — can seem worthless here. Cleat bottomed or lug-soled boots are better choices. 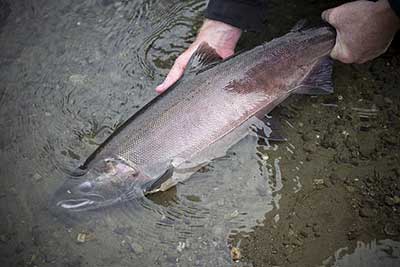