Can I keep this skull I found?
Picking up whale bones, antlers and animal parts 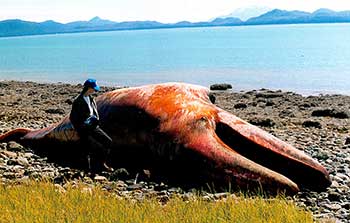 A dead grey whale washed up on a beach near Juneau a few years ago. Over the course of several months, those willing to brave the stench salvaged the bones. When I checked it out, I asked one person who was taking some vertebrae if it was legal. He said he assumed it was okay, “Because grey whales aren’t endangered.”

Alaskans are fond of animal parts. Hunters keep skulls, hikers find and keep shed antlers, beachcombers keep bones, and it seems like everyone keeps a few bird feathers. What is legal to keep, and what’s not?

The path to the answer might be complicated, but generally the answer is simple: Yes, you can keep this or no, you can’t.

Animals in Alaska, and Alaska waters, are managed by different state and federal agencies, and each agency has rules about picking up and keeping parts of the animals they manage. In this context, the Alaska Department of Fish and Game manages terrestrial wildlife, including upland game birds such as grouse and ptarmigan. The U.S. Fish and Wildlife Service manages (or co-manages with ADF&G) most other birds and three marine mammals: Pacific walrus, polar bear, and sea otter. The National Marine Fisheries Service manages other marine mammals, including seals, sea lions, porpoise, toothed whales and baleen whales.

Land ownership, or status, is an issue as well, and there are places where animal parts must remain where they lie.

Brynn Parr is a permit biologist with the Division of Wildlife Conservation at ADF&G. She said if a person is walking through the woods and finds a naturally shed antler, they can keep it. The same is true for skulls and bones.

“As far as deer, elk, moose and caribou antlers go, you can pick them up and take them home,” she said. “It’s okay to take a deer skull. If someone found a Dall sheep skull, I’d recommend they bring it in and get a complementary seal, to document that it was found and it’s not a poaching situation. All sheep have to be sealed if they will be taken out of state. There is no sealing requirement in Alaska for deer, so no need to seal a deer skull.”

The “seal,” generally a metal tag, is attached to the skull.

Land ownership - where you find it - is important, too. It’s illegal to take anything out of a national park. So a moose antler shed on the Gustavus forelands is legal to take home, but if it falls off a mile away in Glacier Bay National Park, it has to stay there. Some animals, like Steller sea lions and sea otters, are endangered or threatened in parts of Alaska, and not others. It’s legal to take home a sea otter skull from a Southeast Alaska beach, but not a Kodiak Island beach. 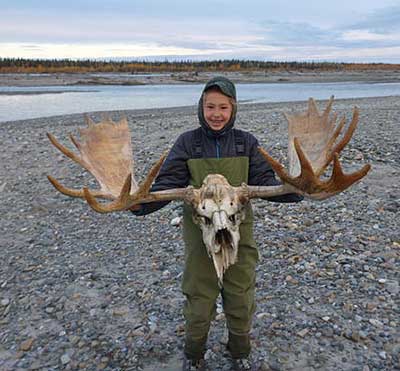 Alexandra Juliussen shows a moose skull she discovered on a gravel bar on the Kuskokwim River. Photo by Gabe Juliuseen.

So what about keeping those grey whale vertebrae? Legal. There’s a caveat: the parts must be registered with National Marine Fisheries Service (NMFS).

Bob Marvelle is the supervisory enforcement officer with NMFS in Juneau. He outlined a scenario in Southeast Alaska:

“You’re a non-Alaska Native and you’re walking the beach, or within a quarter-mile of the beach, and you find a dead sea lion. You can collect hard parts,” he said. “Hard parts only – nature has to take its course, if there is soft tissue on it you have to leave it – you can’t cut anything off.”

Contact NMFS within 30 days to register the part. You can bring it in, or an enforcement officer can drop by your house. “It’s often easier for us, and them, if we go to them,” Marvelle said. “We try to work with folks. We get basic information about the object, what it is, where it was found. We work hand in hand with the biologists, and this information helps them track things like dead whales or dead sea lions on the beach.”

Marvelle said it’s sometimes tricky to identify an object. “It’s a tooth, but what’s it from? I’ll get pictures and do a positive ID. Is it from an endangered species or not?”

The item gets a registration number on it. “I just registered some parts today – once it’s registered it can’t be transferred without authorization,” he said. “If a family is beachcombing and finds some bones on the beach – do it up front. Don’t have mom register everything in her name if the kids are going to take some of the bones somewhere else.”

The U.S. Fish and Wildlife Service, which manages walrus, sea otters, and polar bears, also registers parts that people find and can legally keep. Could you keep a polar bear skull, or a walrus tusk if you found such a thing on a beach? Yes.

Mac Whisler is a USFWS resident agent in charge, based in Fairbanks. “It would be legal to find and keep a polar bear skull, if it was found within a quarter mile of the beach on land, and it was registered,” he said. “You can’t keep polar bear claws, though.”

He said the Fish and Wildlife Service does not use the term “hard parts” for that reason. They state that bones, teeth and ivory may be collected. He said the object has to be on land, within a quarter-mile of the ocean.

“People do occasionally find a dead walrus floating on the ocean, and if they’re not Native and it’s not part of subsistence hunt, they can’t take it,” he said. “It has to wash up on the beach. Once beached, a non-Native could take the ivory.” 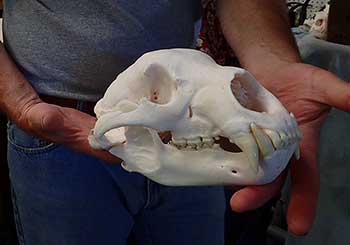 Taxidermist Jeff Kihlmire holds a bear skull he cleaned for a client. Photo by Riley Woodford

You must bring the object into a USFWS law enforcement office within 30 days and register it. The offices in Alaska are in Nome, Fairbanks and Anchorage, and contact information is at the end of the article.

Alaska Native people can collect virtually all parts from any marine mammal for subsistence purposes. Specific parts from walrus, polar bears and sea otters must be registered with the USFWS. Someone who collects an item would contact a tagger.

“There is a network of taggers that work for the Fish and Wildlife Service throughout the state,” Whisler said. “They’re usually local residents. They tag the animal and give them a certificate. For a walrus tusk, the hides and skulls of polar bears and sea otter, they get a locking tag.”

Marvelle, with NMFS, said baleen is in a class by itself. “Non-native people cannot collect baleen, Alaska Natives can.” Raw baleen can then be crafted and sold.

“The term we use is significantly altered,” Marvelle said. “An Alaska Native taking and polishing the baleen, smoothing it, it is significantly altered – you can’t make it raw again. An Alaska Native can collect an endangered species animal part like baleen and make a baleen basket. Or a sea otter, and craft it into a doll, boots, scarves; it can’t be just displayed as a hide.”

Regulations protecting marine mammals and endangered species were enacted in the early 1970s. Prior to that, non-Natives and even non-residents legally harvested polar bears and made rugs, taxidermy mounts, and a variety of things that would be illegal today. What happens when you inherit something like that?

“It’s considered pre-act,” Marvelle said. “I get calls about pre-act items that are out there, ‘My grandparents had this item – what can I do with it?’ There are places that have stuff that’s been up on the walls for 60 or 70 years.”

Marvelle documents that the object pre-dates the protection acts. “One guy’s dad died and he had a fully mounted harbor seal,” he said. “He had his dad’s hunting license, hunting permit, and even the plane tickets. He had pictures – this was from 1961 or ‘62. It made it easy to prove it was pre-act. So I had to verify it, and it was legal for him to have this.”

State and federal agencies can also issue educational, scientific, and other kinds of permits that enable people and institutions like museums to possess animal parts.

A common issue Marvelle sees is non-Native people doing things that would be legal for Native people. 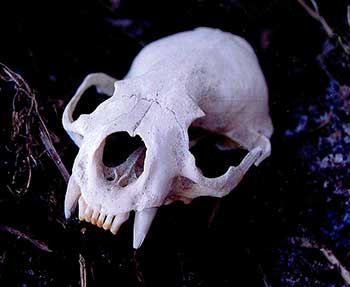 “There are a lot of say, humpback whale bones that have been crafted, or baleen scrimshawed by non-Natives, and then sold as a Native handicraft,” he said. “I have sperm whale teeth in evidence now from illegal sales.”

He said a couple years back an outfitter supply company got in trouble for mass producing a bow hunting accessory using seal hides. “They were taking seal hides and cutting them up, making mechanically mass-produced items and selling them,” Marvelle said. “They were not Native, and even if they were, something can’t be mass-produced mechanically. It has to be a handicraft.”

The issue of selling animal parts is complicated, with restrictions, exceptions, and qualifications, and that’s best addressed in a case by case basis.

It’s not legal to possess songbird feathers, so I can’t keep that beautiful cobalt-blue Steller jay feather I found. Considering that 150 years ago, snowy egrets and trumpeter swans were nearly hunted to extinction for their feathers, it understandable that efforts were made to protect birds. At least 50 North American bird species were targeted for the millinery trade – feathers and wings used to adorn hats. The Migratory Bird Act, passed in 1918, applies to a wide range of birds, migratory or not. Hawks, eagles and owls were not included in the original act but are protected today by subsequent laws. It also protects eggs and nests.

“In general, you can’t possess or sell bird feathers,” Whisler said. “With some exceptions – you’re a hunter and you have lawfully harvested a bird during hunting season, a hunter can keep those feathers. Upland game birds are not federally regulated, so ptarmigan, grouse are okay – you can pick up all the grouse feathers you want.”

That’s true of birds like pheasants, quail and chukars, in states that have them. It’s legal to have feathers from domestic birds like chickens or peacocks, and birds that are legal to keep as pets, like canaries, pigeons and parakeets. A link to the “clean list” for legal pets in Alaska is at the end.

The feathers from lawfully hunted waterfowl are legal to own, use, possess, or transport, Whisler said. “You can’t sell them. Importing and exporting is tricky. There are some exceptions – feathers from lawfully hunted waterfowl like ducks and geese can be sold for fly tying.” Importing and exporting questions should be answered by the wildlife inspection office in Anchorage at 907-271-6198.

The Alaska Sea Grant Marine Advisory Program recently issued a flyer called “Collecting dead marine mammal parts while beachcombing.” It details the three things you need to know regarding marine mammals: your ethnicity; the land ownership (and your responsibility to know any removal restrictions; and the population status, under the Endangered Species Act, of the marine mammal you find. Once those details are clear, it’s pretty easy. You can download the free PDF and learn more from Sea Grant. 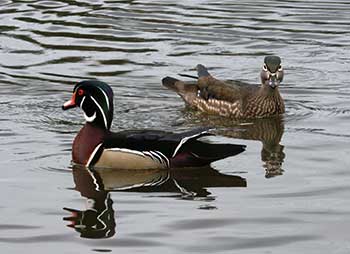 NMFS Law Enforcement: For questions about seals, sea lions, whales and porpoises, and to register parts.

Below are links to the FWS-specific federal regulations for migratory bird hunting and marine mammals, providing more precise language.

Riley Woodford is the editor of Alaska Fish and Wildlife News. He began collecting skulls and bones as a biology major in the early 1980s when he prepared study skins and museums specimens for his college. He has tiny shrew skulls gleaned from owl pellets and (registered) whale vertebrae.