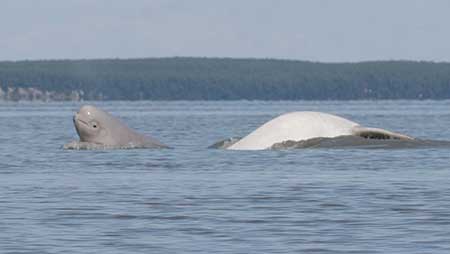 Captain Ahab’s obsession with his great white whale may be literary, but it is matched by the real-life dedication of scientists and citizens focused on an endangered group of small white whales in the waters of Cook Inlet near Anchorage.

Cook Inlet is home to a distinct population of belugas, animals that are seen in the silty coastal waters of Knik Arm and Turnagain Arm. The belugas used to be far more abundant - the population today is a fraction of its historic estimate of about 1,300, and has not recovered despite two decades of conservation efforts. This year, concerned groups have teamed up to produce Belugas Count, a day-long free festival Saturday, Sept. 9, that combines citizen science and public participation with special presentations on belugas.

“We hope this will be an annual event to promote local pride, stewardship, and awareness,” said Verena Gill, a wildlife biologist with NOAA Fisheries.

The citizen science element is an invitation to help view and count belugas in the morning, from 9 am until noon, from 12 viewing stations along Turnagain and Knik Arm (a list of locations is at the end). Organizers will have some spotting scopes and binoculars on hand, and participants are encouraged to bring their own if they have them. Datasheets and basic information on belugas in Cook Inlet will be provided. This is a shore-based count only, and will not include drones or aircraft.

Gill said organizers were inspired by annual whale watching events along the Oregon Coast, and events like the Audubon Christmas Bird Count.

“If you think about the Christmas Bird Count, it’s held about the same day every year, and you get trends and can build a long-term database. We’ll look at their distribution each year – does it change year to year. Every piece of the puzzle helps.” she said.

The Alaska Zoo will host presentations, booths, family activities, and displays, including a beluga skeleton and interactive aerial survey videos. Presentations include highlights of the Cook Inlet Photo ID Project, lessons from acoustic monitoring (hydrophones deployed on special buoys that record beluga vocalizations), and fun facts about belugas. The festival runs from noon to 5 pm in the Gateway Hall and Classroom at the zoo.

Gill said the count raises awareness of belugas, and is a great way to get the public to help. “We always want people to call in beluga sightings,” she said. “This event might result in a lot more calls from the public about belugas. People are driving around Turnagain Arm, Cook Inlet all the time. Belugas are right there, next to the big city of Anchorage. We love to know where they are, what were they doing, and how many.”

She said scientists are also interested in reports of beached and dead belugas.

“Even reports of dead animals are helpful,” she said. “Necropsies are valuable, and the fresher the better.” 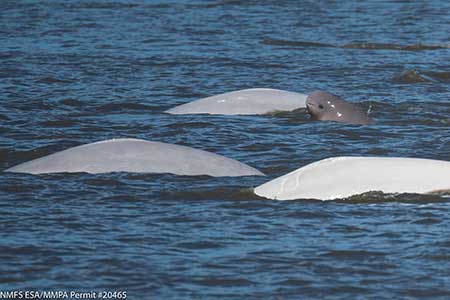 Three adults and a calf taken in mid-August 2017 by NOAA researcher, Paul Wade. Belugas range from about 12 to 15 feet in length. Calves are dark blue-grey and gradually lighten as they mature, they are usually white by about age 8 or 10.

While it seems that the white whales might lack identifying characteristics, Gill said that scars and marks have enabled researchers to identify hundreds of individuals, and pictures are available online. “You can flip through and look at pictures. You can find out their history, when and where they’ve been seen, and when they had a calf.”

Belugas forage in murky coastal waters and swim up silty glacial rivers - belugas have been seen as far as 750 miles up rivers in Interior Alaska. They can hunt entirely by echolocation. Belugas in the Arctic hunt under sea ice, and use their echolocation sonar to find thin ice (to break for breathing holes) and open leads.

Belugas are very vocal animals, producing a variety of grunts, clicks, chirps, and whistles which are used for navigating, finding prey, and communicating. Because of this, they have sometimes been called “sea canaries.”

Cook Inlet belugas were listed as endangered under the Endangered Species Act in 2008. These beluga whales are year-round residents of Cook Inlet. Cook Inlet belugas were once common in both the upper and lower inlet with a historical population estimate of 1,300. A nearly 50 percent decline occurred in the mid-1990s due to unmanaged subsistence harvests. The current estimate is between 300 and 400 animals. Congress imposed a moratorium on the subsistence harvest of Cook Inlet belugas in 1999, and designated the population as depleted under the Marine Mammal Protection Act in 2000. In 2011, an area of 3,013 square miles of critical habitat was established. In spite of these efforts, Cook Inlet belugas have not recovered and the reasons why are unknown.

Scientists are looking at the movements of belugas and their foraging areas in the inlet, and their diet and feeding behaviors. Whales have been identified individually and researchers are also looking at the relatedness between whales, mating strategies, reproductive success and the whales’ social structure. A variety of tools are used: hydrophones that “listen” and record whales, tissue samples that provide genetic information, necropsies of beached whales, and visual and photo-based monitoring. Researchers are also looking at contaminants in the water.

There are five stocks of beluga whales in Alaska: Beaufort Sea, Bristol Bay, Cook Inlet, Eastern Bering Sea, and Eastern Chukchi Sea stocks. Only the Cook Inlet stock is listed as endangered under the Endangered Species Act. In fact, the Bristol Bay Stock has grown in past decades - in the 1950’s, it was believed that approximately 1,000 to 1,500 belugas occurred in Bristol Bay. Based upon aerial surveys, it appears that this population increased at approximately four percent per year between 1993 and 2005. Aerial surveys have detected approximately 18,000 belugas in the Bering Sea stock. Biologists estimate a minimum of 3,700 belugas in the Eastern Chukchi Sea stock, and close to 40,000 belugas in the Beaufort Sea stock. 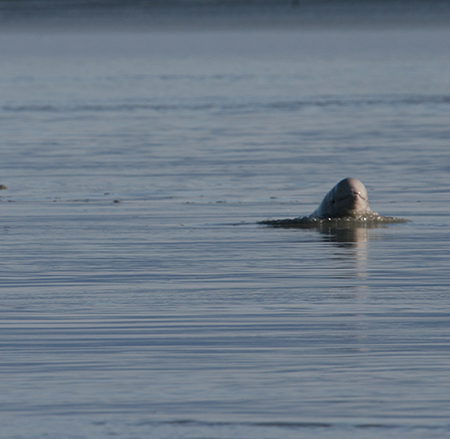 
Cook Inlet Belugas Count - Saturday September 9, 2017. The event is FREE and open to the public. No registration is required to attend.

Station 10: Mouth of Eagle Bay at JBER (Please Note: This is the only station not open to the general public).

Exact locations and directions to stations here; all stations will be marked by sandwich boards advertising Belugas Count

Presentations on the hour (20 minutes long): These will be located in the classroom downstairs at the Gateway Complex at the Alaska Zoo.

More information on Belugas Count at the NOAA website