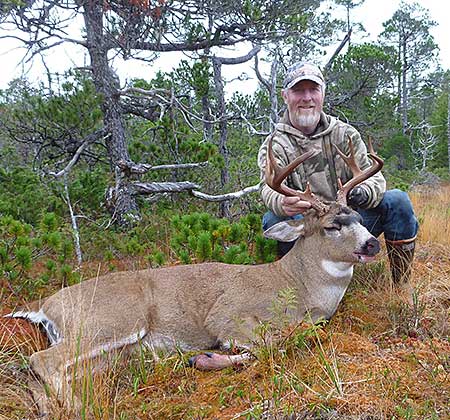 Boyd Porter did not set out to harvest a trophy black-tailed deer. But when he walked up to a big, heavy-antlered buck he had successfully called in, Porter seriously considered having it mounted.

Taxidermists will tell you that is the moment of truth.

“Stop and think about what you want to do before you start cutting,” said taxidermist Jeff Kihlmire. “If you’ve got a bear on the beach and the tide is coming in and it’s getting dark, I understand that. Otherwise, take a breath. The quality of your mount starts right here with you.”

Porter knew those initial cuts would determine the final outcome. He laid the deer out on the ground, chin flat, antlers even, legs tucked under it like it was sleeping, and stood over it, looking down.

“There are different mounts – shoulder mount, half mount, full size, and that determines how you skin it,” he said.

Porter decided on a shoulder mount, the classic wall mount. He made a circular cut behind the shoulders and front legs, completely around the deer, then followed the line of the spine up between the ears. He cut around the front legs above the knee, popped the leg at the knee and peeled the hide off the legs like short sleeves. He cut the head off at the base of the skull where the neck meets the spine.

“Leave the head in the hide,” he said. “The skull and face and everything - let the qualified taxidermist do the delicate skinning around the mouth, nose and eyes. And give them way more hide than they need, when he makes the skin tucks, the mount will look better and more life-like.”

Kihlmire described a variation of this, emphasizing that it’s okay to leave the head on, and the importance of erring on the side of too much hide. “You can’t go wrong on a shoulder mount by going too far down towards the ribs – I can always trim it but I can’t put it back once you cut it off.” 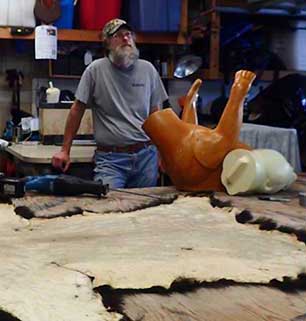 Taxidermist Jeff Kihlmire with a bear rug in progress.

Don’t cut the cape too short. Give the taxidermist hide to work with – at least six inches behind the front legs for a shoulder mount. Some taxidermists even say mid-body for the circumference cut.

You can cape the animal (and harvest the edible meat) before you gut it. The cleaner you keep the area around the animal the better.

Cut up through the skin, from the inside out. Cutting down cuts the hair roots, which you want to avoid.

Do not cut an animal’s throat to bleed it if you plan to make a mount.

If you have the option logistically on your hunt, leave the feet in a bear hide, and the head in a deer hide for the taxidermist.

Avoid getting blood on the hair and fur. Blood can permanently stain hair, especially white hair or fur like a goat or sheep. Rinse fresh blood off with water immediately if possible.

Cool the hide after skinning, and use a game bag - don’t use a plastic garbage bag.

Ideally, freeze the cape or hide without salting it.

If you are going on a special hunt, talk to a local taxidermist first. Look at different mounts and think about what you might like, and consider the space on your wall where it might be displayed.

Cool the hide. Use a game bag, or put it directly in a cooler on top of the ice, not in the water.

Freeze it, if possible, Kihlmire said. “Ideally, especially if you’ve just got the skin off and you haven’t done anything with it, still got the feet in it, haven’t turned the face, still got fat and meat on it, roll it up, put it in a game bag and let it cool. Get it in a freezer, freeze it like a block and get it here.” 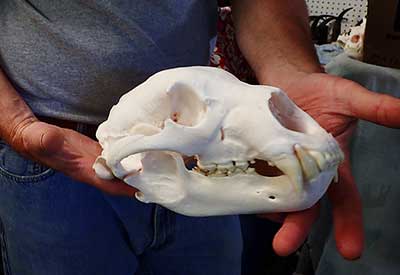 A cleaned bear skull. Kihlmire uses a colony of dermestid beetles to help, but getting a skull in gleaming white keepsake condition involves some messy hands-on work.

Hunters in the field often salt a hide. About 20 pounds of salt is recommended for a black bear hide, and 40 pounds for a brown bear. After fleshing it well, salt the hide, between the toes, and down in the tail skin. Salt draws out moisture, tightens the hair follicles and kills bacteria, but it can cause problems as well. If there is too much meat and fat on the hide, the salt won’t penetrate to the hair follicles and a lot of extra liquid is generated, which needs to drain or the hair will begin slipping. Salting can also dry out the face, and unless the eyes and lips are completely turned, makes it difficult for the taxidermist to finish the turning. Salting also interferes with freezing.

“If you can get it in a freezer, don’t salt it,” Kihlmire said.

If you can’t freeze it, you’re going to want to salt it, and put it in a game bag, Kihlmire said. The game bag lets the liquid run out and helps cool the hide. “If you put a warm hide in a garbage bag, you might as well put it in the oven. It’ll cook. After it’s completely cooled, and you’re ready to stick it in the freezer, you can put it in a garbage bag so you don’t make a mess in the freezer. But it must be completely cooled.”

Actually, Kihlmire can sometimes “put it back,” but repair work adds expense, extra time for difficult sewing, and odds are good the repair work will still show. A taxidermist will buy a tanned hide (a black-tailed deer runs about $100) and use pieces to patch and repair. Kihlmire said one of the worst situations is when a hunter cuts a deer’s throat to bleed it – and he’s seen this done on both sides of the neck.

“I’m a taxidermist, not a plastic surgeon,” Kihlmire said. “There is some stuff you just can’t fix. And when you have to buy someone else’s a spare hide, it’s not going to be your deer.” 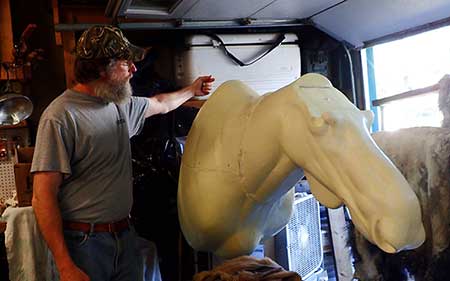 Taxidermist Jeff Kihlmire with a moose form. The basic forms are modified in a variety of ways. The skull plate with the antlers will be mounted on the head.

Kihlmire described some variations on the shoulder mount and half mount, like a “full sneak” or a “semi-sneak” and reminded hunters to consider the space where the mount will go. “Think about the antlers, how far it will stick out and how high it will be,” he said. “Caribou, elk, and especially moose, need room between the head and the wall.”

He measured a moose mannequin he was preparing and noted that the end product would come out four feet from the wall and require a space six feet wide and six feet high.

Kihlmire modifies the mannequins, the closed-cell styrofoam form that makes the “body” of the mount under the tanned hide. He cuts wedges, shaping the form for a left turn, or a deer turning its head and looking to the right. Sometimes the modifications help the mount fit better in the room. He adds lengths of cord, modeling clay and other underlying elements that make the finished result more life-like.

“For a full sneak pose you’ve got the head stretched out with the neck below the shoulder,” he said. “A semi-sneak the head is even with the shoulder.”

If he’s doing a life-size mount, he prefers that the animal is skinned with a dorsal cut up the back, from between the ears to just above the tail. “Basically peel the whole thing down that way,” he said. “That makes it easier for me – less sewing. Sewing under the arms is difficult.”

Other taxidermists may have other preferences, so a hunter considering something as ambitious as a full body, life-size mount should talk to the taxidermist before the hunt.

A tanned hide is the simplest product, and a bear “rug” is a hide sewed to a backing, with a form for the head and mouth. Bear hunters typically “rug-cut” the hide when skinning, and Kihlmire said he’d prefer they leave the feet it and let him deal with them. It’s easy to damage the toes and claws, and the damage shows in the mount. “Turning” the head is also tricky, that is, cutting carefully around the eyes, ears, nose and mouth. 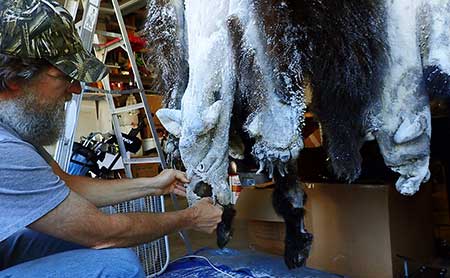 Fully turned and salted bear hides. The next step is a trip to a tannery.

“I tell people, if you’re not comfortable with the head, leave it in and I’ll do it,” he said.

These days, Kihlmire said 90 percent of bear hunters also want the skull cleaned for display. The classic European mount of a deer or other game animal is simply the clean skull with antlers, mounted on a plaque. It’s still very popular with hunters and does not take up as much room as a shoulder mount.

Riley Woodford is the editor of Fish and Wildlife News. His brief foray into taxidermy as a teenager resulted in a couple ducks and a six-pound largemouth bass that his dad threw away.