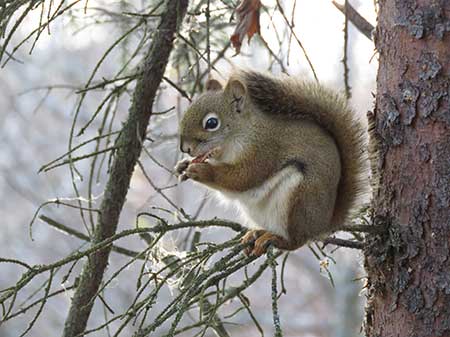 Red squirrels average about 8 ounces live weight. While they aren't very big, they are abundant in forested areas.

The Alaska Department of Fish and Game has taught a lot of young people to hunt small game through various outdoor skills programs. These first-time hunters get just as excited about harvesting squirrels as they do snowshoe hares. Coming back with something to cook is an accomplishment even though the animal is small. It also hones observation skills, practice handling and shooting a firearm, and field dressing and cooking animals.

There is no limit or closed season for the taking of squirrels in Alaska. Another benefit of hunting or snaring squirrels is that is doesn’t cost a lot, you don’t need any fancy equipment and you usually don’t have to go far to find the animals. A pellet rifle, a .410 shotgun or a .22 rifle are all inexpensive and adequate for squirrel hunting. Then all you have to do is find the squirrels in their spruce forest habitat. This is usually not a problem as they give off alarm chatters as you come into their territory and if you can find their middens you can find the squirrels. A squirrel midden is the area at the base of a spruce tree where squirrels store, and feed on spruce cones throughout the winter. You can identify the midden as a pile (sometimes many feet deep) of shucked spruce cone scales left over after they eat the seeds. This pile is interlaced with tunnels that the squirrels utilize.

Not just for Kids 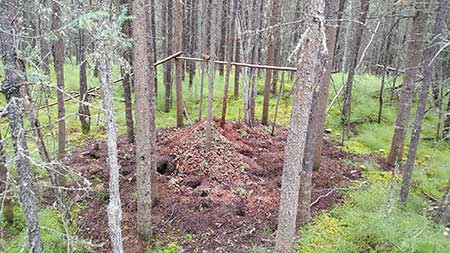 A red squirrel midden. The midden is a cache of food, and also the waste left when the squirrels removes the seeds from the spruce cones. A red squirrel is fiercely territorial, defending its midden and roughly one-acre territory from interlopers.

I was on a hike two winters ago looking for snowshoe hares (just before their numbers started rising in Interior Alaska). After several miles I came back to my truck empty handed. I ran across a young guy who had a handful of red squirrels. When I congratulated him on getting the animals and asked about his squirrel hunting he replied, “I grew up in the Lower 48 hunting squirrels. I love squirrels so I just continued hunting them after I moved here”.

There are also many homeowners that kill red squirrels because they have a propensity to chew their way into the eaves of homes and set up a nest in the warm insulation under the roof. Some of these homeowners undoubtedly do not eat the squirrels, but some feel obliged to do so. I have a friend who snared squirrels at a midden near a house because the homeowner had squirrels getting into his roof. They ended up with 48 squirrels. There were not 48 squirrels initially in that one territory or using that midden, but when one squirrel disappears from its territory, others from the surrounding area infiltrate in.

The most ardent squirrel hunter I know is Tim Howe who lives in Fairbanks. Tim is constantly active outdoors and when he is not hunting large game or birds, he hunts and snares hares and squirrels. When I asked Tim why he hunts squirrels he immediately replied, “Exercise”. He then went on to explain that he started hunting squirrels during one of the lows of the snowshoe hare cycle. He couldn’t get any hares and realized that squirrels are almost always abundant and started hunting them. 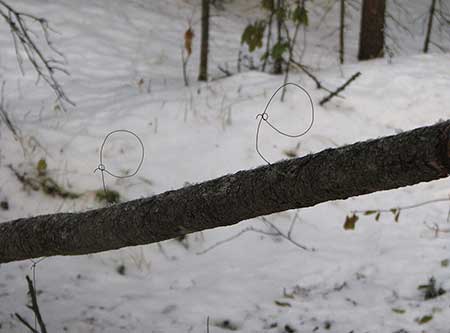 A pole rigged with snares for catching squirrels.

Tim hunts squirrels with an air rifle and also runs a squirrel trap line on 10 acres of forest near his home. On his 10 acres alone he averages 30 or so squirrels per season with a high year of 76! He also gets squirrels from friends who get them incidentally on their furbearer trap lines.

Not much meat you say…

You may wonder how much meat you can get from a squirrel. Well, besides being a hunter, Tim is also a scientist and a compulsive data collector. He pulls the meat off of each squirrel he gets and weighs it, so he knows that the average squirrel around the Fairbanks area provides about 3.5 oz. of meat. Four squirrels and you have nearly a pound of meat. Considering that people eat frog legs and mourning doves (2 oz. of breast meat) squirrels aren’t too shabby. One year Tim made 26 lbs. of squirrel jerky – that’s approximately 119 squirrels.

There are endless ways to cook red squirrels. The first red squirrel that I ate was simply simmered in a frying pan in Italian dressing. I was surprised at how good it tasted. They can be cooked over a campfire or deboned and the meat added to soups or stir fry. You can Google it and come up with hundreds of hits for cooking squirrels. A lot of people soak them in salt water overnight. Tim Howe thinks that the meat is neutral tasting and can be used for whatever you want. He parboils the meat and pulls it off the bone. He has made pot pies with it, sausage, and jerky. With all the squirrels available, you can try many recipes. You just have to get out there and get some squirrels. 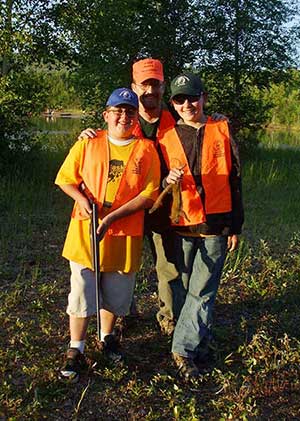 * Note: You must possess a valid hunting license to harvest red squirrels in Alaska if you are 18 years or older. Some Game management units in the state require hunters to have completed a Basic Hunter Education course.

If you were born after January 1, 1986 and are 16 years old or older, you must have successfully completed a Basic Hunter Educa­tion course before you hunt in the units listed above.

If you are under 16 years of age, you must have either successfully completed a Basic Hunter Education course or be under the direct immediate supervision of a licensed hunter who is:

(a) 16 years of age or older and has successfully

Mike Taras is the Education and Outreach Specialist for ADF&G, Wildlife Conservation Division in Interior and Northeast Alaska. He occasionally eats squirrels.