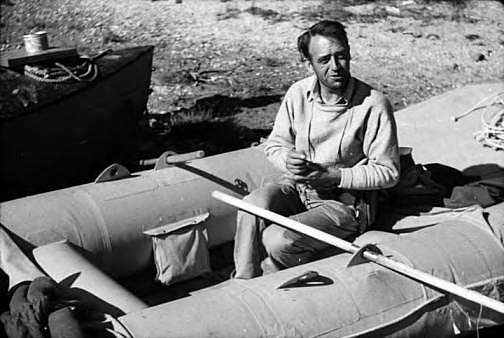 Amos Burg took the first recorded trip in an inflatable raft down the Colorado River in 1938. This image from the Alaska State Library Historical Collections, ran with his obituary in the Juneau Empire June 13, 1986.

The man’s obituary in Alaska Magazine’s 1986 “End of the Trail” memorializes him as an “explorer, secret agent, world traveler, free-lance writer, and film maker.” Luckily, he was also an ADF&G employee from 1955 until his retirement in 1974 at age 73. The man was Amos Burg - and he made some great films during his time at ADF&G, which you can now watch at your leisure via the ADF&G Vimeo channel. (You can search on Burg Alaska) If you like historic newsreels complete with background music, you will most definitely enjoy the format of these informative and “retro” movies.

Alaska Resources Library & Information Services (ARLIS) discovered some of the old original 16 mm films in its backlog and had them digitally converted, first to DVD, then to .mp4. ARLIS has identified and converted 12 titles, all soon to be at the ADF&G e-library media site:

Angling Under the Midnight Sun

Fur Seals of the Pribilofs

The White Whales of Bering Sea 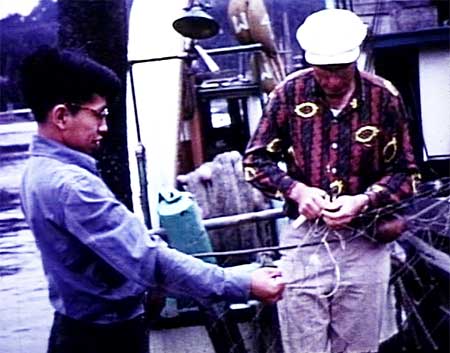 Valley of the Kings offers a look at the Taku River fishery in the 1960s. A Juneau gillnetter repairs his net in Harris Harbor in Juneau. “Competition for the kings will be keen, and nearly 80 boats will participate.”

Rainbows for the Sportsman

Valley of the Kings

But there were at least 16 in all. The films ARLIS hasn’t found yet, but identified through the historic ADF&G Annual Reports are:

Return of the Musk Oxen

The search is on for these, as well as a 1978 full-length film about commercial fisheries, not yet found.

Amos Burg was often described as a shy man – no wonder his name is never mentioned once in the old reports, only his accomplishments. Reading through these reports, it is evident that the early years of the Department were marked by great creativity and production, while dedicated staff like Amos Burg implemented their vision of a Department with a vast mission to the people of Alaska. Central to that mission and the motivation for these films was to educate the Department’s constituents, the Alaskan public.

To keep the public informed about the new Department, Amos Burg established the Information and Education Section of the Territorial Department of Fisheries, which became ADF&G after statehood. All initiated during Burg’s tenure, the Department produced a weekly TV program in nine communities statewide in the 1970s, wrote a monthly column for Alaska Sportsman magazine in the 1960s, produced a monthly glossy magazine for 25 years, and created these incredible film productions. The 1958 annual report crows that 7,000 people in 45 audiences watched these films during the Department’s public programs. The legacy of Amos Burg lives to this day through the Department’s educational programs and through these great films. 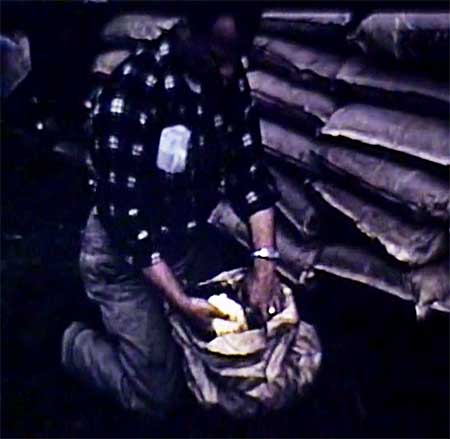 In “Rainbows for the Sportsmen,” about fish stocking, a fisheries biologist scoops handfuls of powder from a burlap sack (note stack behind him) as the narrator explains, “These sacks contain the roetenone, or fish toxicant, that will eradicate the undesireable fish… it is harmless to humans and other warm-blooded animals.” The roetenone is “applied” by towing the burlap sacks behind a skiff

To read more about this remarkable man whose reach extended way beyond Alaska, see the 1986 article by Mark Kissel in Alaska Fish and Game Magazine which even talks about his time as a “secret agent!”

For more on ARLIS and the ARLIS collection of skulls, mounted fish, and other objects:

Celia Rozen is The ADF&G librarian and part of the ARLIS Management Team.