By James Kari and James Fall 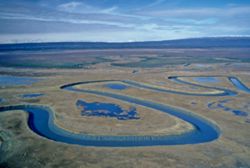 When Europeans began exploring Alaska in the late 18th and 19th centuries, the Upper Cook Inlet region was home to dozens of Dena’ina (Tanaina) Athabaskan villages. The people of the region were supported by the same rich and diverse fish and wildlife resources Alaskans enjoy today.

The familiar natural features of the area – rivers, lakes, bays, ridges, mountains and passes – all had Dena’ina names, which passed from generation to generation through an oral tradition of stories and songs. Like other Alaska Native groups, the Dena’ina kept no written records. Young people learned place names as they hunted and fished with their elders, or as they listened to stories about others’ lives and activities. Their original naming system reveals much about the culture, history and land use of the Native people of the Cook Inlet region.

Today, many geographic features have English versions of the Dena’ina names, such as the Susitna River, from Suyitnu, meaning “Sand River,” the Skwentna River, from Shqitnu, something akin to “Sloping Ridge River.” Newcomers renamed the body of water called Nuti – “Salt Water” – Cook Inlet, and the stream known to the Dena’ina as Dgheyaytnu – “Stickleback Creek” - was renamed Ship Creek.

In 1974 James Kari, a linguist with the Alaska Native Language Center, began recording the place names and oral narratives with speakers of the Dena’ina language. In 1978 James Fall, then an anthropology student, started investigating Dena’ina culture. The foremost contributor to the efforts to document traditional names was Shem Pete. Shem Pete was born around 1896 at Yusdishlaq “On the Little Point,” an island near Susitna Station. In his lifetime Pete covered thousands of miles by foot and by boat, and he learned the traditional names for more than 600 places in the Upper Cook Inlet area.

In the mid-1980s collaboration between these men, working with dozens of other Dena’ina and Ahtna people, resulted in a book, “Shem Pete’s Alaska: The Territory of the Upper Cook Inlet Dena’ina.” In addition to listing the traditional names of more than 700 places in the area, the book contains essays about the upper inlet people and narratives written in Dena’ina and in English.

Fall and Kari reported that Shem Pete and other Dena’ina spoke of the place names with great care. They report the place names from memory, without reference to maps or records and they are very consistent in their pronunciation. There is very little disagreement about the names among Dena’ina speakers, and they are also very clear about what they do not know. For example, they do not coin new names; places with forgotten names are left unnamed. Consequently the system of Dena’ina place names is old, stable and conservative. In fact, 55 of the 60 traditional names recorded by Europeans before 1845 are still remembered today. For example, the Dena’ina name for Stephan Lake in the Talkeetna River drainage, Tatik’niltun Bena (“Lake where game trail goes into the water”) appears on a 1839 Russian map of the area as “Tatikniltubena.”

When Lt. Joseph Herron explored the Yentna River for the U.S. Army in 1899, his guides told him the name of the hill now called Beluga Mountain. It appears as “Sneedee” on Herron’s map. This is Hnidi (“The one upriver”), the Dena’ina name for Beluga Mountain. Today’s maps show Indian Creek; Herron named this stream “Jam-bod-i-nook” Creek on his maps. The Dena’ina called it Jan Bughutnu (“Horizon Creek”).

Dena’ina place names are descriptive, and many illustrate how the Dena’ina lived. The people moved through their territory as resources became available. This is evidenced by the traditional name for the outlet of what is now called Whiskey Lake, Dach’qelqiht, which means, “Where we spend the spring.” Susitna River people traveled there in May to trap trout before the salmon arrived. K’dalkitnu, the traditional name for the Talkeetna River, means “Food is Stored River,” denoting the stream as a location for food caches for the nomadic people of the Talkeetna Mountains – the Dghelay Teht’ana (“The Mountain People”). These people of the lower Susitna River traveled each spring to Dilhi Tunch’del’usht Beydegh, (“Point where we transport hooligan”), now Point Mackenzie, to trade their catches of hooligan with the Dena’ina of Knik Arm.

Other names denote important seasonal hunting and fishing areas. Across from present-day Anchorage, the mouth of Fish Creek was called K’eyghashutnu, meaning “Fish Harvest Creek." (The name for Fish Creek itself, K’enakatnu, from which “Knik” originates, cannot be translated by today’s Dena’ina speakers.) Wasilla Creek was Chuqilntnu, “Fermented Fish Creek,” the place where Dena’ina prepared chuqilin by burying salmon in underground caches. They also constructed platforms of poles extending out over the mudflats north of the present day Port of Anchorage from which they caught salmon with dip nets, hence the name Tak’at (“Dip Net platform”). Hiline Lake is Bak’leghili Bena, “Something is Clubbed in it Lake," because, Shem Pete explained, “That lake is full of silver salmon. There are nichil (winter houses) there. They dug pits there for salmon. They clubbed fish there.” Because of changes in drainage patterns, salmon no longer reach the lake, so the name offers a clue about the former distribution of resources.

Many names also designate hunting areas or describe hunting techniques. Alexander Lake is Deldida Bena ("Tree Squirrel Lake"). Billy Pete, Shem's son, when describing his use of this country said, "All you need is a little hook and some snares to survive in that country. We caught lots of big grayling and spruce grouse."

K'enuq' Qiy'unt ("Where There Is Mineral Lick"), is a hunting site near Red Shirt Lake (see below). In springtime, when supplies of dry fish ran low, the Dena'ina of the lower Susitna River hunted bears along a low ridge that extends from Cow Lake (Tl'eghes Bena, "Leach Lake") to the Little Susitna River. Hence its name is Sesnena, "Saving Land."

A mountain on the Chickaloon River (Nuk'din'itnu, "River That Bridge Extends Across") below Fourteenmile Cabin, now locally known as "Table Mountain," is Chun El Duk'eldesht, "Where Arrows with Excrement Are Shot Down," because, as Shem Pete explains, "They hunt sheep on that mountain. The sheep keep away from them so they move up above them and defecate, and then they shoot that arrow (rubbed) with excrement, and it causes the sheep to move." Evidence of the Dena'ina's use of dogs to hunt sheep is contained in the name Bentulik'elashi, "The One That Dogs Are Driven Up," a ridge that extends west of Twin Peaks in the Chugach Mountains above Eklutna.

Dena'ina place names also document the aboriginal use of wild plants. For example, an island near the mouth of the Susitna River is K'tl'ila T'el'iht (“Where Indian Potatoes are Gathered"). These roots (Hedysarum alpinum) were a favorite Dena'ina food when roasted and dipped in oil. An island above the mouth of Kroto Creek (see below) is Ggis Beq'e T'el'ihi' ("Where Celery Is Gathered"), referring to the use of wild celery (Heracleum lanatum) as food in spring.

Other names commemorate events in Dena'ina history. The name of the Thlachulitna River, Tnunidch'ulyutnu ("River Where People Killed Each Other in Water") refers to an incident that took place during a war between two Dena'ina clans. Another example is Qichi Qinghilneqt, "The Old Lady Made It That Far," a stream in the Chulitna River drainage, which refers to an episode in the biography of Ch'anget, a woman from the Talkeetna Mountains.

Some Dena'ina place names are metaphoric. A mountain between Devil Canyon (Nutughil 'ut, "Where Current Flows Down") and upper Chunilna Creek (Ch'aniltnu, "Creek That Flows Out") is Ch'ak'ul'ishi ("Lead Caribou Moves Out") because the Dena'ina say that the western Talkeetna Mountains along the Susitna River look like a herd of caribou with this mountain as the leader.

Other names simply comment on the more obvious characteristics of a geographic feature. A good example is Dghelay Ka'a ("Big Mountain"), the Dena'ina name for Mount McKinley. The more publicized aboriginal name for this mountain, "Denali," derives from that of the Koyukon Athabaskans who live north of the Alaska Range, Deenaalee. It is best translated as "The High One."

For the Dena'ina, the Kenai Peninsula is, quite appropriately, Yaghenen, "The Good Land."

Many places in the upper inlet with Dena'ina names have been renamed on today's maps. Unlike the descriptive names of the Dena'ina, English language place names often refer to individuals. For example, Mt. Spurr, which the Dena'ina named K'idayq'eni, "That which Is Burning Inside," and Pierce Creek, Etl' Ghilgetnu ("Rotten Beaver Dam Creek").

Ironically, there are many well known places with modern names that non-Native people have named after Dena'ina individuals. Perhaps the best known is the town of Wasilla. The Dena'ina called that area Benteh, "Among the Lakes." There are many other examples, such as Alexander Creek (Tuqentnu, "Clearwater Creek"), Anderson Creek (Q‘eysestnu, "Birch Ridge Creek") and Kroto Creek (also called Tuqentnu, “Clearwater Creek.”

There are some place names may be mistaken for Dena'ina names. "Matanuska River" derives from the Russian name for the Indians of the Copper River (Mednovtsy), who followed a trail along the Matanuska River valley to trade on Cook Inlet. The Dena'ina name, Ch'atanhtnu ("River from Which Trail Comes Out"), also commemorates this trade. The name for the Tyonek Indian Reserve, which appears on modern maps, "Moquawkie," has no known Dena'ina equivalent and today's speakers are puzzled about the name's origin.

The Dena'ina call Mt. Susitna Dghelishla ("Little Mountain"). Contrary to popular belief, there is no Dena'ina story of "Susitna, The Sleeping Lady," but there are numerous Dena'ina traditions associated with the Dghelishla area. This is how Shem Pete describes Ch'chihi Ken (“Ridge Where We Cry"), the sloping ridge south of Mt. Susitna, the so-called sleeping lady’s “hair”:

"That big ridge going downriver from Dghelishla all the way to Beluga, they call Ch'chihi Ken. They would sit there. Everything is in view. They can see their whole country. Everything is just right under them. They think about their brothers and their fathers and mothers. They remember that, and they just sit down there and cry. That's the place we cry all the time, 'cause everything just show up plain. That's why they call it Ch'chihi Ken."

In 1986, there were only about 25 speakers of the Dena'ina language. Almost all of them were over 60 years old. Most of the territory described in “Shem Pete's Alaska,” now home to about half of Alaska's population, is no longer being used by the Dena'ina people. That Shem Pete and other Dena'ina elders remember so much, in such detail, is evidence both of their remarkable memories and of the former vigor of Upper Inlet Dena'ina culture. Learning more about Dena'ina place names, part of this heritage, can enrich the experience of anyone who visits or lives in the country bordering Cook Inlet. It is our hope that the information presented in “Shem Pete's Alaska” will remain important to future generations of Alaskans who live in and use Dena'ina Elnena, Dena'ina Country.

All Dena'ina names are written in the Dena'ina practical alphabet, which is described in “The Dena'ina Noun Dictionary” by James Kari, and in Shem Pete's Alaska. Both are available from the Alaska Native Language Center. Copies of “Shem Pete's Alaska” may be purchased for $29.95 for paperback or $65.00 for hardcover, plus $4.00 for postage and handling, from University of Alaska Press. Contact UAP through the Web site at www.uaf.edu\uapress, or call 474-5831.

This story, co-authored by James Fall and James Kari, originally appeared in the Nov. 1987 issue of Alaska’s Wildlife Magazine. At that time, James A. Fall served as a Subsistence Resource Specialist with the Division of Subsistence, ADF&G, Anchorage. James Kari was an Associate Professor of Linguistics at the Alaska Native Language Center, University of Alaska, Fairbanks.