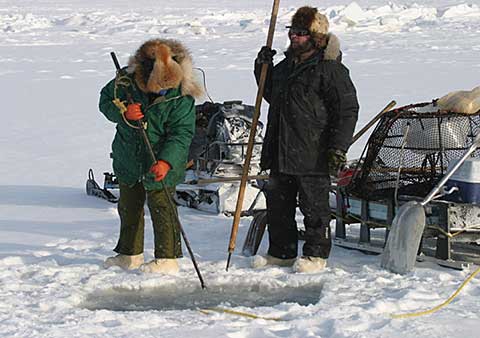 Crabbers use snow machines to cross sea ice and chainsaws to access the water in the winter Norton Sound crab fishery.

Alaska is an amazing and unique place, with bountiful sea life, pristine shorelines, a diversity of landscapes and a culture connected to the land and its waters. Many people rely upon these fundamental qualities of Alaska to make their living and to sustain themselves. Fishing in Alaska is a fun activity and also a way of life.

In 2016 ADF&G recorded a total of 9,125 commercial fishermen that harvested their catch with 23,419 commercial crewmembers. According a study prepared for the Alaska Seafood Marketing Institute, an estimated excess of 25,000 seafood processing workers were employed in Alaska in 2015.

The picture of a troller pulling in a Chinook salmon, or a gillnetter reeling in a net full of fish – against a beautiful background – captures the excitement and wonder of commercial fishing. But what about some of the more unknown aspects of commercial fisheries in Alaska?

In Norton Sound for example, commercial fisherman on snow machines go out on the sea ice that freezes over in the winter. They use powerful chainsaws and carve holes in the ice to drop down their king crab pots to harvest that delicious tasting shellfish. 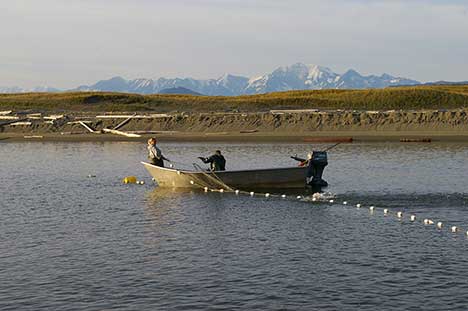 Commercial set net fisheries are another interesting aspect. Fisherman make their annual trek to their fish camps, often times with their whole family. Generation after generation come to haul in the nets with salmon that could be eaten by people all over the world. Learning how to fish and walk at the same time, and then growing up and teaching their grandchildren how to gillnet fish is the way of life for some. Driving the four wheeler with tote in tow to the buyer is all in a day’s work for a set netter. Alaska’s commercial fisheries contain generations of family members learning and working together. Just as other states may have generations of coal miners or steelworkers, Alaskans come from generations of fisherman.

While setnetters operate right from the beach, there is also the at-sea fleet that is about as far as you can get from any coastline. These operations fish beyond the state of Alaska’s territory in federal or even international waters. Some of these vessels are essentially large floating processors that turn the fish harvested into their wholesale product forms right there on the vessel. Each year over 1 billion pounds of fish are harvested and processed from the Gulf of Alaska and the Bering Sea, primarily groundfish such as pollock, Pacific cod and flatfish. A primary product form is surimi, which often gets a bad rep as fake processed fish that is not healthy. In reality, the time between harvest and processing is pretty minimal and the fish are harvested from offshore waters with little influence from any man-made pollution. Those fish are probably still wiggling when they are sent through the processing machinery. 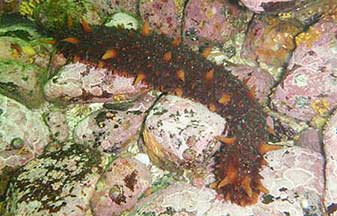 Most of the groundfish harvested in Alaska is exported worldwide, but for other fisheries occurring in Alaska that is not always the case. In Southeast Alaska and Kodiak, there are dive fisheries for geoduck clams and sea cucumbers. The primary market for these critters is Asia. What’s impressive about the dive fisheries is the volume that such a small group of individuals can harvest in one season, all of which is done by hand. Openers occur during the fall through early spring for geoduck clams and begin sometime in early October and end in early December for the sea cucumber fishery. Open fishing times average a day to a day and a half of dive time per week. In 2016, a total of 59 permit holders harvested a total of 484,284 pounds of geoduck clams and 193 divers harvested 1,477,718 pounds of sea cucumbers.

One thing that might be surprising about Alaska’s commercial fisheries is the value of a fishery does not necessarily correspond to the harvest. There are many factors affecting this. Some of those factors include supply and demand, popularity of the finished product forms and strategic marketing. This graph illustrates the differences between these values - As you can see, shellfish and halibut are a small percentage of overall harvest, but have a high value associated with the end product forms.

The commercial herring fishery in Southeast Alaska utilizes one of the most unique assessment strategies of all of Alaska’s fisheries. In Sitka Sound, the herring fishery harvest levels are originally calculated from the numbers of eggs. Survey methods consist of aeriel and dive surveys to estimate the number of eggs in the water. That number is then used to determine the number of female herring that laid them. The herring fishery has everything to do with timing. ADF&G works with fisherman and processors in order to determine exactly when the harvest will occur, ensuring that the eggs are mature and in their most desirable form for market. The openings are carefully timed down to the day with the announcement of the opening sometimes occurring just a few hours prior to the main spawning event. 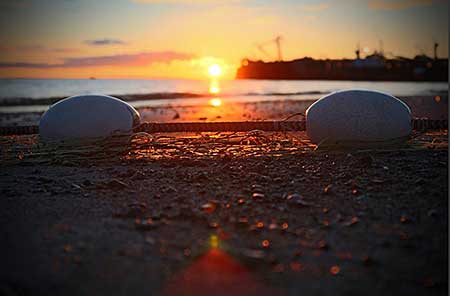 The end of a day's fishing. Photo by Lindsey Aspelund.

In conclusion, there is always something to learn about Alaska’s commercial fisheries, even for the most seasoned participants. It is an ever changing industry that evolves over the course of time. It is not always from a boat that brings seafood from the sea to our plates. It could be from a snow machine, a plane, or even a four wheeler, but most importantly, from the people and the diversity of the environment. So next time you’re enjoying a tasty bite of Alaskan seafood, know that it came not only from the ocean, but from a culture that is unique to Alaska.

Shellene Hutter is a fisheries biologist based in Juneau. She has written about catcher-sellers, fishermen selling fresh fish at the docks, and direct marketing, for Alaska Fish and Wildlife News.