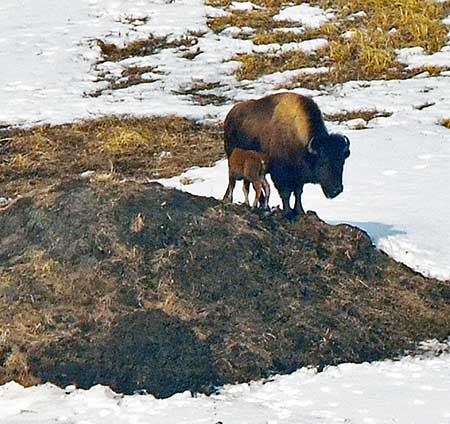 It’s calving season for the Lower Innoko/Yukon Rivers wood bison herd. On Sunday April 16th, 15 newborn calves were spotted among several groups of adult bison. The calving groups were spread out from Holikachuk to Holy Cross. This is very early in the spring for so much calving, so there may be many more calves to come.

In the spring and summer of 2015, 16 calves were born in the wild to cows that had been bred the previous year while still captive. In 2016, 17 calves were born with no input or assistance from humans. 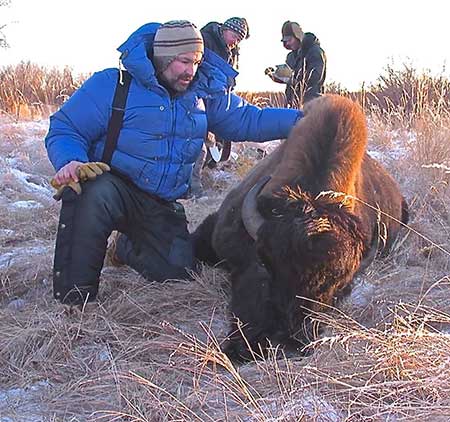 In December of 2016, biologists captured and radio-collared 12 bison. During captures, accelerated growth rates of young bison were observed, and adult body condition was exceptional. It is clear that these bison are thriving in Alaska.

Since their release in 2015, several predators have been observed near the newly established wood bison herd. Both black bears and grizzly bears have been seen grazing in the same meadows as bison with little to no interaction. This spring ADF&G observed two wolves approaching a calving group with 2 new calves. The calves and yearlings moved close to their mothers and some of the bison faced the wolves. Then two bison actually walked out of the herd to meet the wolves. If the wolves were attempting to catch a calf, they were unsuccessful this time. 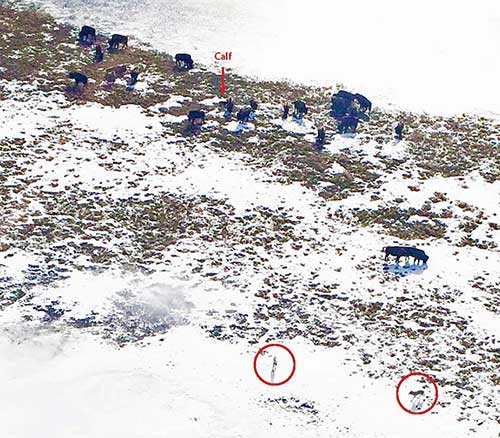 A calving group of bison being inspected by 2 wolves – circled in red at lower edge. The wolves trotted off after being approached by two old cows with tails up.

After a new bison population is established, it usually takes 20-30 years for predators such as wolves to figure out how to kill bison. Even after they do, predation is uncommon and predators have more difficulty killing bison than moose and caribou. It is thought that bison’s great size, speed, agility, and social nature contribute to their ability to avoid predation. 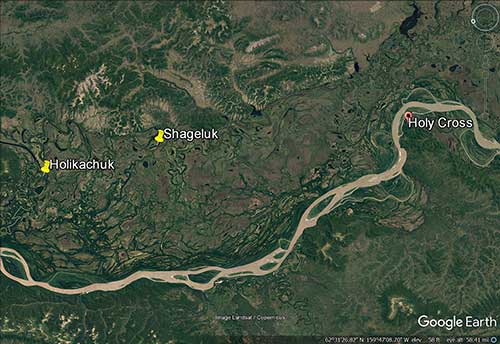 This Google Earth image shows the main range of the Lower Innoko/Yukon Rivers wood bison herd in Southwest Alaska. The initial reintroduction was near Shageluk, downriver on the Innoko River from Holikachuk. The Yukon River is the main river running across the image.