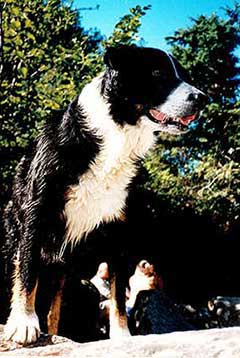 Emily waits for her stick to be thrown.

My dog Emily, a border collie mix, liked to chase seagulls at a popular dog-walking beach. It seemed pretty harmless - she never came close to catching one, and after all, they were just seagulls. (We thought of them as skyrats back then.) Emily was a great hiking companion, trained to “leave it” if instructed and “come” without hesitation (usually). She never chased deer or got quilled by a porcupine.

After she died, I hiked without a dog and I began seeing a lot more wildlife. I came to realize that dogs do repel animals; all the activity, bounding through the underbrush, and especially their scent. That’s pretty intuitive to Alaska hunters, and I don’t know anyone who takes their dog deer hunting. It’s also part of the reason that dogs are excluded from wilderness trails in all National Parks.

I would not have let Emily chase gulls if she actually caught them, and my friend was horrified when her Australian shepherd ran down a marmot on Dan Moeller trail and killed it. I knew better than to let Emily harass waterfowl and shorebirds, but I wasn’t really much more enlightened than a dog handler who does, saying, “They’re just ducks.”

I also realize that I was on a spectrum of dog owners. I walked my dog off-leash in places I shouldn’t, because she was “under voice control.” But at least I wasn’t as bad as my friends who let their dogs jump up on strangers, routinely saying, “It’s okay, she’s friendly.” These same friends dismissed all criticism by saying, “You just hate dogs.”

The folks on that end of the spectrum aren’t going to read this article anyway, and those on the other end don’t need to. I hope there are some wildlife-loving dog owners in the middle that may care enough to read on, and appreciate there’s a little more happening on those unleashed dog walks. 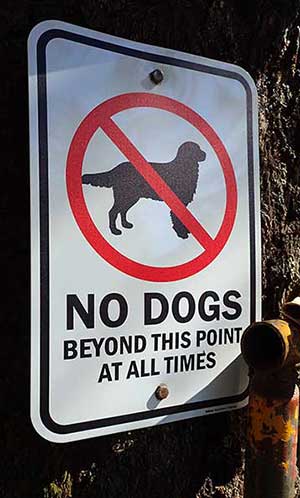 Sign announces that dogs are not allowed in the area that supplies Juneau's drinking water, adjacent to a popular dog walking area.

As a dog-loving naturalist, Bob Armstrong learned to accommodate his canine companion and his desire to see wildlife. Armstrong is a Juneau writer, photographer, and videographer and has produced and co-written a number of books on wildlife and nature.

“We taught our dog to watch wildlife,” he said. “Ptarmigan and grouse would walk up; she’d just cock her head and look at them. She wouldn’t bark or growl or anything.”

His dog was a lab-whippet combination. “She was a really fast runner, but she didn’t chase wildlife. She started out life chasing, and we trained her.”

Armstrong said as a photographer, there were times he simply had to leave her at home.

“Even though she was well behaved – just the presence of a dog makes a difference. I was photographing beavers in the Dredge Lakes area, and I’d be there very early in the morning. They were active until the first dog walkers showed up, and then they’d slap their tails, and go in the den and not come out again.”

Safety is an issue as well – and not the safety of the beavers. 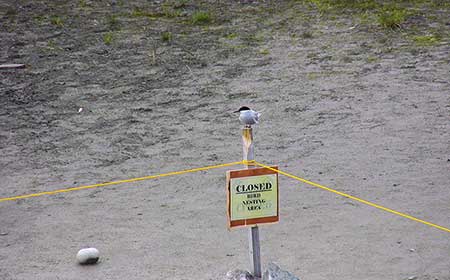 An Arctic tern perches on a sign designating the off-limits area near the Mendenhall Glacier where ground nesting Arctic terns raise their young in May, June and early July.

John Neary is the director of the Mendenhall Glacier Visitor Center. He said the area is home to several gull colonies, but the ground-nesting Arctic terns and sandpipers are the most vulnerable. Many nest in open areas along Mendenhall Lake, close to heavily used trails, and he and his staff work to accommodate visitors and wildlife. Some areas are roped off with posts and signs to alert visitors that the area is off-limits from April through July.

“Trampling is part of the concern, but the bigger issue is scaring the adults off the nest,” he said. “That means a raven or eagle can come in and snatch eggs or nestlings, predation is the most important issue.”

He said gulls nest in steeper terrain; tern nests are in shallow depressions in the gravel. The gull colonies are not roped off, although one colony is marked with signs. He said the gulls will let you know if you’ve wandered into their nesting area.

“If a bunch of birds are acting disturbed, you are in a colony,” he said.

The bear-salmon viewing area gets intense use. A series of elevated platforms and gated/fenced trails follows a section of Steep Creek for several hundred yards, an area frequented by bears when salmon are present in summer. That section is closed to dogs, but leashed dogs are permitted in adjacent areas. Neary said it can be a struggle to get local dog handlers to comply. 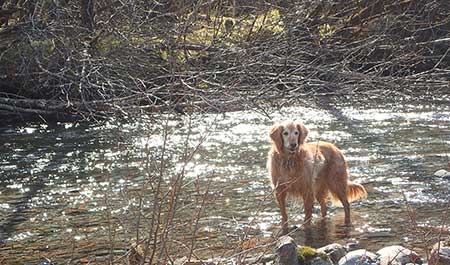 A dog plays in Gold Creek.

“What we have seen is that our residents feel entitled; we get a lot of grief about asking people to keep their dog on a leash,” he said. “We’re trying to manage a very intense use area. Dogs are disruptive, they scare away wildlife that people want to see, and they also jump up on people and scare people.”

He said one technique tends to make people more receptive. The rangers simply give them a free leash.

“That sets a different tone for the conversation, and people will consider leashing their dog around all the other people,” he said. “We also give them a direct connection on how it affects the bear family. We say, ‘Do you realize there is a bear with cubs right over there trying to fish and you and you dogs are displacing them?’ They’ll say, ‘oh, right, sorry.’”

He said as a single act, it may not be that significant, but there are many, many acts that are cumulative.

“The rangers see things over and over, day after day, and they’re aware of all the little things that add up, things that might not seem important to a dog owner when it happens once. It doesn’t need to be the dog in the stream, barking, which is so common, that’ll alert the bear and she’ll move off. We think there is significant impact to the bears. Bears really notice dogs, barking or not, the bears feel threatened by the dogs, and mother bears are especially attuned to dogs.” 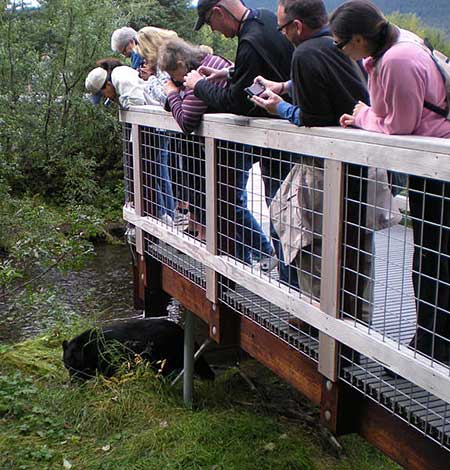 A crowd watches a bear pass underneath the viewing platform at the Mendenhall Glacier. Laurie Craig photo.

Neary said the smell of a dog represents a potential threat to a bear, and it is in their nature to be aware of that.

“A dog will be in the parking lot and we’ll see a bear focused in that direction, paying attention to that scent. They’ll ignore the people. There might be fifty people on the platform clicking away with cameras, and they’ll disregard them because they are not a threat.”

The cumulative effect of multiple incidents is especially troublesome to migratory birds in the spring. Migratory shorebirds and waterfowl fly great distances between stops to rest and refuel, and Armstrong said the places they do stop are particularly important.

“The birds need food and they need rest, and certain areas of the wetlands are more important than others,” he said. “Being chased off can be really harmful for migratory birds, particularly those that come a long ways. The Mendenhall Wetlands is one of the few places some migratory birds stop on their way north, and they may stay for just a day to recuperate and feed. Western sandpipers are known to do this – fly long distance between fueling and rest stops.”

While state and federal laws (and municipal ordinances in most cities) protect migratory birds and their nests, many popular dog walking areas in Alaska’s most populous cities are located in wetlands. Leashing a dog is particularly important in the spring in these areas. Other places are better suited for ball chasing and stick fetching.